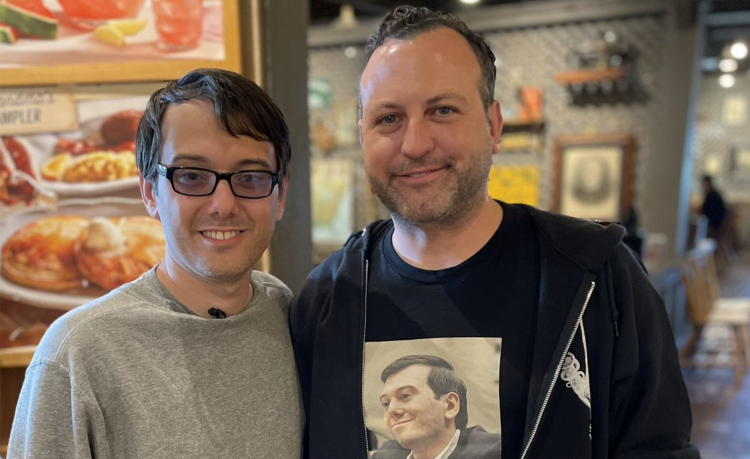 Martin Shkreli on the left just released from prison, May 2022

Martin Shkreli, the convicted fraudster who upped the price of life saving drugs by 5,000%, is out of prison to a halfway house on early release.

And in to crypto, apparently. He calls himself a “web3 developer” on Twitter, and learned about Uniswap while in prison.

“I think we’ll see more and more financial products that end up in Defi,” he said. “Eventually we’ll see some crypto entity be bigger than the banking behemoths.”

In a three hours long tweeter space discussion, Shkreli said you can be pseudo-anonymous in crypto, and therefore “wouldn’t assume I’m not behind a crypto project already.”

Instead he said any involvement “will be in the shadows as my participation might do more harm than good.”

The Department of Justice charged him in December 2015 with securities fraud. In particular:

“Shkreli failed to disclose to investors that he had lost all the money he managed in Elea Capital, his prior hedge fund, and that Lehman Brothers had a $2.3 million default judgment against him…

Shkreli lied to his biggest investor telling him that MSMB Capital had $35 million in assets under management, when in fact MSMB Capital had less than $700 in its bank and brokerage accounts. Based on these and other false representations, Shkreli and his co-conspirators induced approximately $3 million in investments from eight investors.

In February 2011, MSMB Capital failed to settle a short position of more than 11 million shares of Orexigen Therapeutics, Inc. (OREX) that Merrill Lynch ultimately closed at a loss of over $7 million.”

So he’s very good at losing other people’s money, and since in crypto it’s very easy to lose money, then maybe he is in the right place.

At the time Shkreli said that none of his investors had lost money however, and some of them even made a profit. Yet the jury found him guilty.

“I’m fascinated by crypto,” Shkreli said, but he is bearish on bitcoin. “Crazy using this electricity to crunch numbers.”

He dissed ENS, calling it some sort of vanity consumption. Yet he might buy an ENS for one or two eth and bitcoin “will go to half a million or more.”

“Parler was deplatformed and that would never happen on web3,” Shkreli argued. Parler was kicked out of even their hosting service, and plenty of web3 platforms use traditional hosting.

You can make it more censorship resistant, but that would come with a significant tradeoff in regards to speed in particular as non-traditional hosting, like IPFS, can be similar to surfing on dialup.

OpenSea does run on IPFS however to a great extent. They’ve solved this problem by using IPFS as the raw warehouse where behind the scene workers go to pick up things, and then they send them to Google Cloud and cache it all.

So censorship resistance wouldn’t be the strongest point of web3 in our view. Its strongest point and its only differentiator when it comes to non smart contract based platforms, is ownership of the accounts.

Web3 gets rid of the password basically, and changes the form of communication between say Trustnodes and its subscribers from a username and password – both of which are needed to communicate on the backend to say provide site access – to a public key (the ethereum address) and then the private key they sign to take action.

This is a significant change. Subtle, which is why it has taken so long for web3 to even begin moving towards becoming something, but it is a change of the kind where this new accounting system is obviously better.

“Maybe we wouldn’t have a war in Ukraine if people had web3 wallets everywhere and could read news from a distributed news service that wasn’t firewalled off by China, Russia whatever,” Shkreli said.

Well, the original firewall was language and that’s the biggest reason why Russians might have different views. BBC is bringing out its cold war era Russian radio station now. A decade late, but probably that’s one of the biggest and most effective tool to address these sort of firewalls.

In China state censorship is a very big problem, and now and then they use the ethereum blockchain itself to store certain important texts.

It hasn’t changed much of anything because it is more a cultural problem than a technical problem. Its solution has also been found about three centuries ago in the concept of the separation of powers with elective representation where the judiciary fiercely guards its independence. We think it can potentially be improved with a third house, a Citizens Assembly selected in a jury style.

Crypto or web3 can be political however, but in a different way. As it is new and still in its formative years, its biggest political aspect is an anti-monopoly bias. That’s in money itself, with the global cryptos challenging the monopoly of national fiat, or decentralized finance challenging the more paper based commercial banking system, but also more widely in aspiring to challenge platform monopolies.

That’s where web3 could come in, though from what we’re seeing there probably won’t be a Facebook, but web3. The web3 Facebook instead will likely be completely different and something we can’t describe currently.

OpenSea is a social media of sorts however and they’re fairly prominent, with it giving some sort of idea of what some of the web will probably look like in the future.

And it sounds like Shkreli will play some part in it through venture investing in web3 startups, he suggested. Yet it is quite a bit interesting as to why these sort of people are attracted to crypto.

“You’re a convicted scammer and crypto twitter doesn’t like scammers,” a member of the audience told Shkreli.

Scammers do like crypto though, and that’s probably for the same reasons that anyone else likes crypto.

It’s new, it’s cool, and it does things, including some things that can not be done but with crypto. Uniswap is a good example of it. There are many others.

The flip side is that they’re walking among some very smart people, making crypto probably the toughest industry for scammers to operate, especially if they reach any size of note.

Shkreli has served his time in prison however and so unless he liked it there, presumably he’ll straighten up, but for now all we have is that he is bearish on a bitcoin that will go to half a million.