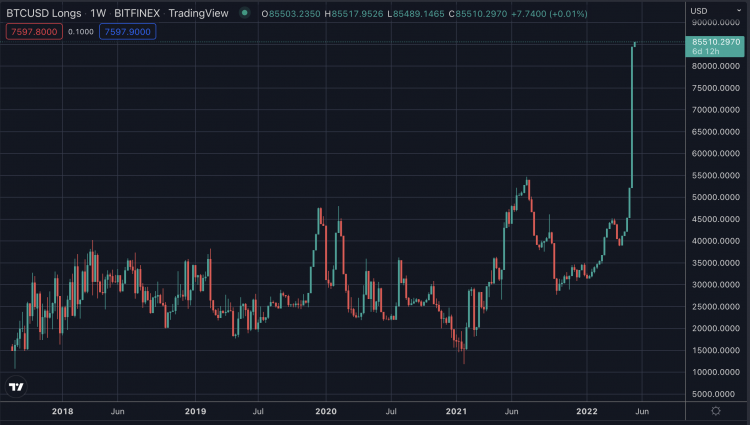 Bitcoin longs spike far beyond all time high, May 2022

Bitcoin longs on one of the biggest exchange, Bitfinex, are on a bull run of sorts since late April, breaking far beyond all time high.

So shorts are basically out of play on finex and they have been since last summer. While longs seem to be making a new play in not just doubling, but almost doubling the previous all time high.

They’ve been up since February 2021 when zoomed out and beyond a brief correction last summer to October, they’ve kept their level and now jump.

So these guys sort of know what they’re doing and part of ‘knowing’ it comes from the fact that they’re actually ‘doing it’ in as far as they might not have enough money to move the market if there was some sort of battle, but they probably do have enough to move it if there isn’t some sort of a confrontation.

That’s because this is a price level where a lot of forces come in. Miners have a lot on the line, they’re not just gone watch. They can withdraw the supply completely from the market.

They connect to all them wizzes and OTC desks who then connect to bitcoin hins (high networth individuals). Some of whom probably use Bitfinex because they have a business relationship with the bitcoin dev studio that pays many bitcoin protocol developers, Blockstream.

And so the finex whales don’t usually get called, they instead do the calling. There was once, in eth, a perpetual long since probably autumn 2018 that kept on and on until probably November 2020.

As this is not just big money, it is also fairly old money, in crypto terms, and this money is up to something, clearly. That something being that they seem to be fairly sure bitcoin will go up.

They might not necessarily be right, but why would they be wrong and even if they are, this sort of money probably has a -75% buffer from current levels, that’s under $10k, and probably can wait three years to be right.