Protests Break Out at Chinese Banks 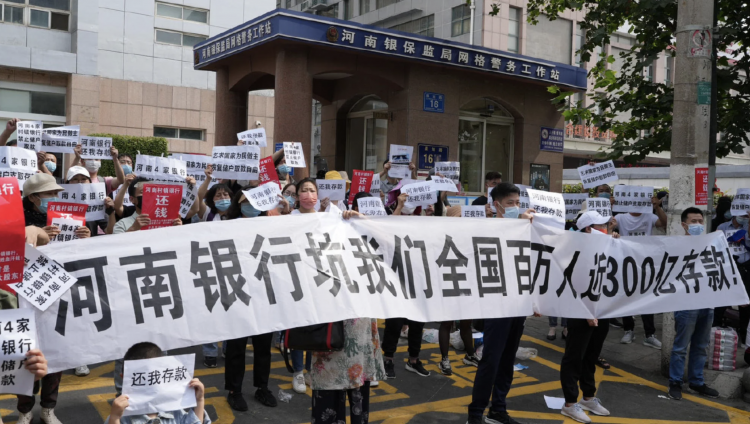 People protesting in front of a bank in China, demanding their money, May 2022

A number of protests have broken out in China after some local banks suddenly went offline last month.

This is one of four banks that finds itself in trouble. Shangcai Huimin County Bank, Zhecheng Huanghuai Community Bank and New Oriental Country Bank of Kaifeng have also gone offline with more than $1 billion worth of deposits.

There’s suggestions they took too much risk while offering a higher than usual interest on savings by 2%.

According to local media China has disposed 2.6 trillion yuan ($389.89 billion) worth of non-performing loans at small and midsize rural commercial banks since 2018.

That’s more than in the past ten years combined, with these regional banking crisis starting around the same time as a pickup on corporate bond defaults was noted.

Rather than that issue going away, it seems to have just paused a bit once the pandemic began, with it now continuing as worries increase of a full blown financial crisis.

China’s economy has been slowing down for a few years and is set to see its lowest level of growth in decades this year.

Markets still expect a 4% increase in GDP however, but the data coming out of China is a bit suspicious with inflation there somehow at just 2% when gas has tripled and oil moves past $120.

Yet, if 2008 is any indication, these sort of things tend to happen slowly and then suddenly, with both defaults and banking troubles grinding on as China’s private debt levels surpass USA.

In addition, unlike USA which can export away its debt through inflation, China’s CNY is pegged to the dollar, so they don’t have much room for maneuver.

In a financial crisis, that peg might even break down, putting pressure on the price of Chinese goods in what can potentially be a spiral.

China in addition has strict capital controls with no relief valve to escape what can potentially be a full blown debt crisis.

Starting in 2016 when they intentionally devalued CNY, China closed off a number of loopholes and even practically banned bitcoin.

Residents there, therefore, do not have many investment options. Concentrating risks and potentially amplifying them with no escape in a time of crisis.

Yet, if a full on bubble burst develops, it remains to be seen just how much people in China care about a bitcoin ‘ban,’ with it not really enforceable and mistaken economically speaking because you should always allow for a release valve.