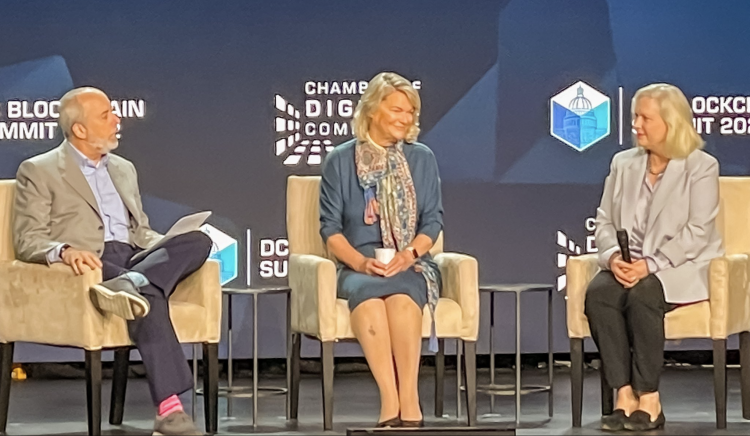 If the United Kingdom and Europe were starting to get worried about the United States becoming too friendly to crypto, a new bipartisan bill will come as a relief in London, in Paris and in Frankfurt.

The Responsible Financial Innovation Act (of 2022?) by bitcoiner Cynthia Lummis and New York’s senator Kirsten Gillibrand re-enacts the discriminatory investment prohibitions, gives Congressional approval to burdensome tax accounting of crypto transactions above $200 when the threshold was expected to be at least $600, and appears to be far more concerned with corporate matters that affect something like Coinbase – such as custody – rather than the crucial matter of the public being locked out of capitalism by being prohibited from investing in startups.

At least they won’t have to ask for permission, with the threshold here a bit low. You’d expect it to be at least $10 million, or $20 million.

These entities will instead be under the supervision of the Commodities Futures Trading Commission (CFTC) which will have jurisdiction over spot trading. In the clarifying statement they say:

“Digital assets which are not fully decentralized, and which benefit from entrepreneurial and managerial efforts that determine the value of the assets, but do not represent securities because they are not debt or equity or do not create rights to profits, liquidation preferences or other financial interests in a business entity (“ancillary assets”), will be required to furnish disclosures with the SEC twice a year. Ancillary assets in compliance with these disclosure requirements are presumed to be a commodity.”

The answer is yes, in theory. In practice, it’s more a sort of where it concerns the platform itself, but as long as it can be forked then a version of it would be decentralized.

That refinement is unfortunately academic as the bill does not deal with it at all, presumably an oversight. As it stands, that means bitcoin will have to report to the SEC, although how is anyone’s guess.

The bill however does helpfully point out that neither SEC nor CFTC jurisdiction applies in the case of a foreign issuer. That is defined as less than 50% of the investors and/or the ‘executives’ being US citizens.

So you can go to Europe and limit any US token issuance to less than 50%, far better than a complete ban of the United States as implemented by some crypto projects.

Beyond these aspects, the bill deals with requiring disclosure from stablecoin issuers while demanding 100% reserves, closing any room for experimentation of 90% reserves, 50%, what about 10% or less like commercial banks?

It suggests some Federal sandbox, studying China’s propaganda on CBDCs, studying whether maybe there could be some crypto Self Regulatory Organization, and seemingly closing the debate on the actual issue that goes far beyond crypto.

The Securities and Exchanges Commission is investigating whether Binance’s ICO in 2017 amounted to a security that should have been registered with the SEC.

Right on cue, Reuters reported on some allegations of money laundering at Binance that has led to some sort of PR ‘war’ between the two.

Regarding the SEC investigation, Binance’s founder Changpeng Zhao responded by re-tweeting someone who said:

“Binance works closely with the SEC. BNB and Zhao are going to be fine.”

Binance has now reneged on their promise to buyback BNB tokens with quarterly profits. That sounds too much like a security, and you need SEC’s permission to launch one.

Imagine if this discriminatory law was complied with, that gives those earning more than $100,000 the complete freedom to invest in what they please, but not to anyone else.

We’d still be at 2013. No defi, no nfts, no eth itself. This space would have been a barren land, sedated, a bit like our healthcare system which seems unable to cure anything because no one can fund anything, or our industry which seems a bit stuck in the 60s outside of tech.

We’re not in 2013 because this law was rightfully ignored, and with this Lummis bill it appears there’s no answer in Congress to the inequities of the prohibition, with the only answer remaining to ignore the discriminatory act.

For it appears somewhat clear the right to invest in startups, and yes in return for ownership, in return for profit, in return for capitalism, will not be granted. Instead this generation, like those before it, whether of color or women or whoever was discriminated by the force of the law, will just have to grab our god given right to participate in capitalism by utilizing capital to invest in innovation and the world we want.

Money is power and such restriction is about power fundamentally. If the commoners can pull their funds together, why they might compete with the Goldman Sachs that picks our SEC chairs and Treasury Secretaries.

An estimated $10 billion was invested by the public, with no restriction or limitations, on Initial Coin Offerings in 2016-17. $4 billion of it was just one project, EOS, the biggest by far.

Just these four projects have returned a 5x on the total amount invested in all ICOs. All the scams, the manipulation, and the losses, have nonetheless led to a huge creation of new wealth and value, and the funding of innovation.

That’s capitalism. Accumulating savings, capital, to invest in promising projects. Disrupt incumbents, find innovation, serve the market better, get rewarded for it for the risk you took. 100 projects, just one is needed, and you’re good.

What’s more, our system of representation is clearly failing for it appears Congress will seriously address this inequity only once inequality reaches Antoinette levels.

Alas this generation can not risk waiting for the anger of the crowd. It’s our duty in fact to ensure they do not get so angry as we’d have to live through it.

It’s our duty, without Congress clearly, to ignore the prohibition and participate in capitalism as of right.

That includes through new forms of ownership, tokenized ownership, of certainly entities decentralized but also those that are not quite there yet.

Because the great success we have seen, the great boom in innovation this space has experienced, can be brought to all spaces, including actual space.

From industry to health care, it is time the word revolution got some actual meaning, it is time capitalism is brought there too, through token ownership, with profit rights and preferably actual equity too.

Because sometime the public has to exercise its sovereign right to not be dictated. It worked for women and those of color, it should work for the investing public too.

This bill doesn’t quite work however. Why on earth should we be denied ownership rights or profit sharing rights? And if we are denied them, all should be denied them, including VCs.

We don’t consent. We haven’t consented since bitcoin was invented and we’ll never consent. We’ll instead end the investment prohibitions, and since there’s no one else to end it, we’ll end it ourself.

Without Congress, clearly, without even the judiciary if necessary. We’ll be outlaws if we have to. Hopefully one day they’ll say we’re actually heroes.

Because there’s no choice. There’s clearly no debate either. The system is rigged and unjust, and so we just have to ignore it, simple. Lummis can go instead and invest without property rights. Oh wait, she gets property rights because she is rich. We can’t, because the rich say so. Well, not in our time, because as the inequality levels show, the rich have had enough fun. Time for the public to have some too.