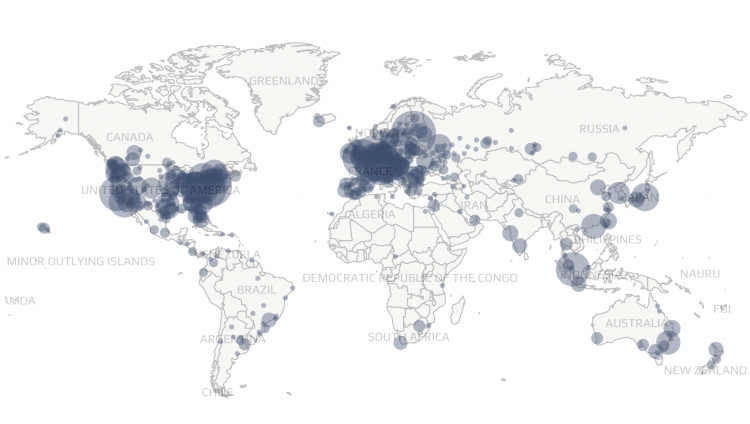 Bitcoin is down but not out in China where crypto exchanges have been banned and bitcoin miners have been kicked out.

It isn’t clear whether these are mining nodes, at least some of them as despite the purported China ban, the Cambridge Center for Alternative Finance claims 21% of bitcoin mining is still in China.

The United States also dominates in bitcoin nodes, with 1,979 beaming from USA. Although Europe as a whole has more with just Germany recording 1,341 bitcoin nodes.

These are reachable nodes, with their operator opening access to public traffic. There are also unreachable nodes that can’t quite be seen, with it difficult to estimate their numbers.

In addition, some nodes run on Tor, with it not so easy to attributed location, and one person can of course run many nodes, although they’re in different cities in China.

Bitcoin itself is not banned in China, so running a bitcoin node is not illegal. Almost everything related to bitcoin is banned however, with the crypto no longer quite responding to Asia trading hours.

That has led to China no longer having any influence on global currencies, when it used to be second only to USA.

Yet that almost 100 nodes keep running shows that there’s still some crypto interest in the country. Though, by node numbers at just 10% that of USA.

Making China irrelevant now, down from its might as far as cryptos are concerned, to a few beaming nodes that keep the lights on.