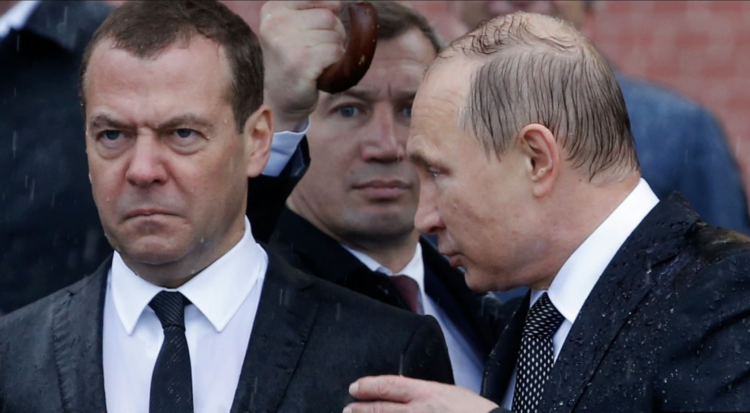 Russian President Vladimir Putin (right) speaks with Prime Minister Dmitry Medvedev in the rain during a ceremony at the Kremlin in Moscow in June 2017.

Russia seems to be going through some sort of a nervous breakdown currently with their former President and Prime Minister Dmitry Medvedev lashing out at… geeks?

“I am often asked why my Telegram posts are so harsh,” he said on Telegram where he has close to half a million subscribers, before adding:

“The answer is I hate them. They are bastards and geeks. They want death for us, Russia. And while I’m alive, I will do everything to make them disappear.”

This has led to speculations on who exactly is “them?” Some say USA, but geek is not quite how you’d describe America. Some say this is an indication of an intention to genocide in Ukraine, and geeks helping Ukraine on Telegram could be one interpretation.

He may be referring to Telegram itself as well, but do you really use geeks as an insult in that case?

That’s a bit thuggish, not that the war in Ukraine wasn’t enough to indicate thugs are running Russia. But, making it this apparent might lead to even places like China questioning whether they are actually dealing with thugs.

Very rich ones. Medvedev himself is estimated to be worth $1.3 billion. Quite a bit less than his boss at $70 billion, presumably from granny pensions. But just like the current Russian president Vladimir Putin, Medvedev also launched a war on Georgia in 2008.

The United States back then had a more decisive leadership. While Russian tanks were rolling towards Tbilisi, the Georgian capital, the George Bush administration announced a humanitarian mission to Georgia, run by the US military. Russia instantly stopped and went back.

In 2021 as well when there was the first Russian buildup in May, the US president Joe Biden sent in the navy towards the Black Sea. Russia again backed down.

In January and February 2022 however, that very same Biden took off the table completely the use of troops even before any tanks had rolled into Ukraine.

And so now Donbas is being annexed, but there’s suggestions the Odessa blockade is coming to an end with Turkish ships to escort the grain.

The United Kingdom would have probably been forced to go in otherwise, showing clearly that Russia knows its limits.

But geeks? What’s next, rantings about ‘intellectuals’ or ‘liberals’ as they call them in nationalist Russia. Some sort of ethnic design, or ‘Russian speaking people,’ that need to be annexed for living space. Some hyped ‘enemy’ like Nato. Control over private companies, like Gazprom. And then to finish it off, a loss of sensibilities by no longer pretending that you’re not thugs.

Fascism, in our time. That’s the legacy grandpa wants to leave his kids. Fascist thugs.