Bitcoin Down, DXY Up on Inflation Data 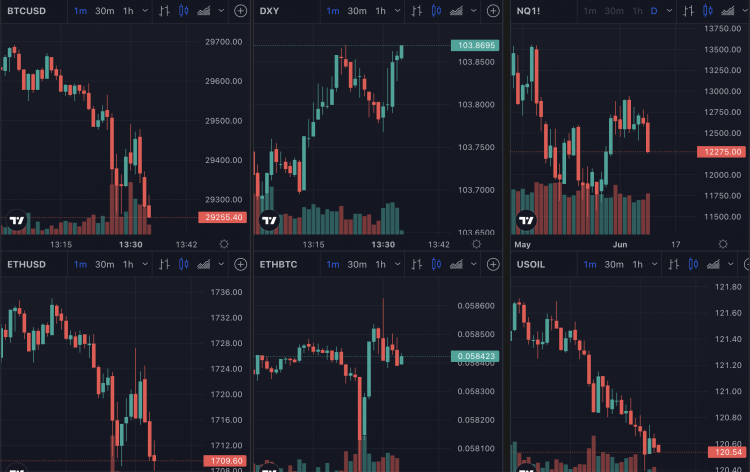 Bitcoin and other asset prices, June 2022

That’s on a very red day for stocks as inflation comes at 1% for May, or 8.6 percent on a seasonally adjusted basis, up from April according to the just released data by the Bureau for Labour Statistics.

However, this rise in inflation appears to be due to just oil and gas. They saw a fall last month, but another significant increase in May.

They’re both down today though, as is gold and bonds, with every asset pretty much red.

Except stocks in Shanghai rose 1.4%. They’re re-opening following a spring lockdown, adding to worries about their economy amid some jittery pockets regarding banks solvency.

US stocks are red however. Nasdaq is down another 2% following a fall of 2.5% on Friday.

Europe’s Stoxx fell 2.5% and FTSE is down another 2% today with only the dollar strength index (DXY) up.

That’s crossing 104, a two decades high, with this strengthening making no sense whatever on the surface because inflation is lowering the purchasing power of the dollar, and so you’d expect the dollar to weaken while investors flee to assets.

Yet, markets are not necessarily rational and they tend to hugely exaggerate, worse than drama queens.

In this case they’re ignoring everything to focus only on the expectation that FED will raise interest rates, and so the dollar should strengthen due to monetary tightening.

Markets are pricing in three rate hikes of 0.5% each, making commercial bank lending profitable for the first time since 2008.

Liquidity may thus be extended to the non-rich, who haven’t quite been able to borrow since 2006. That can potentially increase monetary supply in practice, and so whether these rate hikes will actually have any effect, is to be seen.

What will have an effect is OPEC’s agreement to increase oil production by 50%, as well as Germany’s decision to go shopping for European oil and gas suppliers.

Time should also have an effect because inflation is measured over inflation and so at some point, the effects of the dollar devaluation should wane off.

Investors however are currently half blind because we’re getting almost minute by minute data on inflation, but only quarterly data on growth which in the current circumstances feel like decade old data.

There’s issues obviously with estimates not being very correct if there isn’t some lag, but that applies to inflation too. So both should be published at the same time, or neither.

Because as it stands, we don’t easily have a clue what 1% inflation in May means. Was there 2% growth? Was there a contraction instead?

The Fed will also be blind next week when it makes its decision on whether to hike rates. Inflation dropped a bit in April, rose a bit in May, but what’s the economy doing?

In US, it contracted in the first quarter, but that’s like referring to some decade ago because Fed by now has completely forgotten about it.

In Europe though growth is still at historic levels. That’s because ECB has taken a different approach and by doing so they give us a very nice A/B test.

Inflation in Europe and America is around the same levels. Fed has raised rates, Europe hasn’t yet. Fed has even began pulling out of the bonds market. ECB hasn’t yet, will next month.

And still we get the same inflation rate, almost no difference, presumably because neither oil nor gas cares about Fed or its interest rates.

There is a difference on growth, however, with the United States potentially in a recession while Europe booms.

So well done Powell. We told him to go slowly, and start hiking around now. Bloomberg though was salivating over rate hikes and keeps salivating, and so we got a crash and nothing to show for it.

The mood in traditional tech startups is now bleak, but inflation doesn’t care because why on earth would it. Powell doesn’t set the diplomatic tone with oil and gas producers. He is not the one going shopping, that’s Scholz.

Still, does it make too much of a difference? Thankfully Europe has listened, and so any mistake will be contained to the United States, which hopefully means contraction there will be brief and shallow.

Europe is trying to ride the wind so to speak, while Powell tried to stop it and obviously has failed. So the result will probably be the same and in our view the result will be a re-adjustment in the value of the dollar and the euro due to its mass devaluation in 2020.

Gas and oil as fairly limited utility commodities, are somewhat objective in their measurement of unit of accounts, and so they’ll only respond once the dollar is priced at the level it deserves.

We’re probably half way through it. Nothing can change it, even if Powell does a Volker and hikes to 20%, because inflation kept on back then until it no longer wanted to as the dollar re-pricing was over after it came off the gold standard.

The trillions printed will be over too, after providing an opportunity to set the trajectory for sustainable good growth, at least for a decade.

It may yet do so in USA if Powell is a bit more humble and understands a bit better the forces at play which don’t seem to care about him very much, but the startups do.

And so we wouldn’t raise by more than 0.25% next week, and in the absence of GDP data we’d even hold off the decision until the next meeting. But corporate media wants a beating and so we’ll see just how much Powell is guided by wisdom, and just how much by politics.