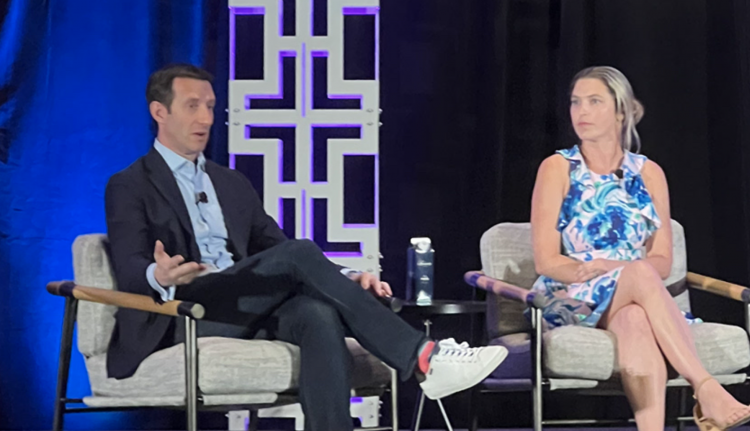 “The market is ready,” said Dave Lavalle, the Global Head of ETFs at Grayscale, as an industry that has waited a decade wonders whether the Securities and Exchanges Commission (SEC) will finally play ball.

To help them, Grayscale held a meeting with SEC last month. “We intend to maintain an open dialogue with regulators and policymakers as we look ahead to July 6,” a Grayscale spokesperson said at the time.

“I think we have everything we need to get the SEC comfortable,” Lavalle said at InsideETFs last week.

His number one task is to get the ETF, which is vital for Grayscale due to the discount on its OTC publicly traded bitcoin shares, but will he succeed?

The deadline for SEC to let it get through or reject the ETF is in just weeks on this July the 6th, months on since the Grayscale Bitcoin ETF application was made in October.

Grayscale, the biggest bitcoin asset manager and by far with 639,180 BTC in custody, is in a tight spot because they already offer a loopholed ETF of sorts, the Grayscale Bitcoin Trust.

The trust has a six months lock time between redeeming bitcoin for shares and vice versa, which has led to a 30% discount over bitcoin’s price.

The concern is that if some other bitcoin spot ETF is approved, the discount would be made even worse, and potentially dangerously so as investors flee, jeopardizing close to $18 billion in value.

Thus regardless of whether SEC’s chair Gary Gensler likes bitcoin or not, causing such damage would be politically quite damaging, and therefore he may well have no choice but to approve the ETF, especially after futures based bitcoin ETFs have been approved.

Because discriminating against an actual bitcoin spot ETF would indicate SEC intends to harm investors, rather than protect them, as futures have to be rolled over, leading to losses for investors.

And thus if a spot ETF has to be approved to get out of the nonsensical current proposition that suggests derivatives are safer than spot, and if Grayscale should be given first chance due to its specific circumstances, then the time is right.

Lavalle says he is hopeful the ETF will be approved. Speaking at Consensus 2022 earlier today, he argued:

“Advisors tell us that ETFs are a reliable building block for their portfolios, and they can’t really do that right now.”

But is SEC listening? Well, it took about a decade for gold as well to get its ETF. Bitcoin now has futures and options on CME as well as a futures based ETF. Grayscale has been managing the custody of more than half a million bitcoin for close to a decade, without a problem. There are bitcoin ETFs and ETNs trading in both Canada and Europe, again without a problem. And so there’s no risk to the approval of the ETF, now there’s only risk to the disapproval.

Presuming it is approved, and if not in July then eventually it will at some point – so why not now and get it over with – it is not too clear what effect it might have on bitcoin’s price and adoption.

Back in 2013, when the first ETF application was made while bitcoin’s market cap was $1 billion, easily adding another $1 billion from Wall Street would have been a big deal.

Nowadays, numerous corporate investors on their own have bought $1 billion worth, with the Grayscale discount alone needing $8 billion to close.

That may be the main benefit: closing the gap. The discount might act as some sort of a drag on price because you can buy bitcoin cheaper there and sell them spot, adding pressure to the price.

Closing the gap will take off that pressure, and so if not a price rise, then at least prices won’t fall as much as otherwise.

The ETF also makes it easier to invest through a stocks portfolio, with big investors staying out of the futures ETF because they don’t want to potentially harm the asset they holding themself – futures facilitate exuberant shorting – or they don’t want to pay high fees due to contract rollover.

A spot ETF therefore will see more uptake, but during bull. During bear, it’s not too clear anyone would care because investors now have plenty of options and plenty of ways of getting bitcoin if they want to.

The ETF just makes it more convenient, but the stock market is still far bigger than the crypto market, and so gaining access to it in a conventional manner can benefit the wider crypto ecosystem.

Yet, since there are now many bitcoin stock traded products, people care far less than they would have cared even in 2017 with the spot bitcoin ETF matter reaching the stage where it is now more a problem for SEC if it doesn’t grant the application because, well it just looks bad.

It gives ammunition to the criticism of a bloated and complacent bureaucracy that takes too much for granted, including public trust in the institution and public consent for the institution.

To the point the judiciary has now stripped SEC of the power to unilaterally pass judgment through an inhouse judge on cases it itself brings to enforce after a Fifth Circuit Appeal Court decision in the case of Jarkesy.

There’s consequences to the loss of credibility and the abuse of power. There’s significant consequences to acting as judge, jury and executioner, and that includes this matter where for a decade now SEC has acted as a judge on what people can invest, instead of being a neutral arbiter and simply a facilitator of functioning markets.

The bias will catch up with the institution, and that may well include Grayscale suing them if they don’t approve the ETF because Grayscale may well have no choice as their Trust now simply can not compete with the many freely traded options in Canada and Europe.