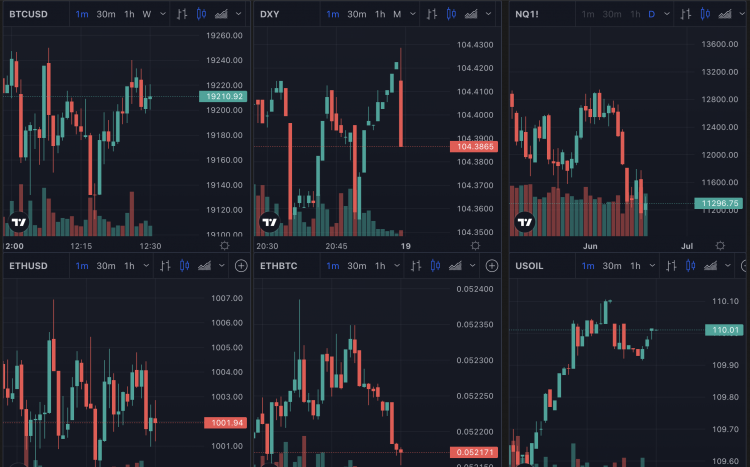 Bitcoin and other asset prices, June 2022

Bitcoin has fallen below its previous all time high, dropping to a new low of $18,700 after just four days of sideways above $20,000.

The crypto-currency is now down another 10% in just a day in a non stop dive, but is it entering oversold territory?

Yet everyone claimed the previous all time high was $250-ish, making $300 the last Spartan stand, which for some time did hold and even gave a nice bounce.

Straight down all spring thus, with just five weeks of sideways at $30,000 and almost no support at all at $20,000 where it held for just one week.

All indicating sentiment is currently atrocious with bulls not even fighting and not even pretending to fight.

A bear parade in effect, the likes of which we have seen quite a few times but it appears to be marching at a greater speed than in 2018.

Buyers are thus just waiting, even though bitcoin sometime bounces and hard to make them think it is leaving the station, and at some point it may well do so.

Therefore this might be the point where hodl starts becoming a thing. Now, it’s not for us to give financial advice, and we’re not, this can fall more but no one seems to think it can go up so maybe it will.

Maybe it won’t, but the previous all time high level is a meme of sorts because clearly it is undervalued if five years on and trillions more printed, with users up 10x or even 100x, we’re back to December 2017 price levels.

There’s a base at this stage to argue that no one knows the bottom, but is it too relevant in a long enough timeframe at these price levels?

The question so being not quite where is the bottom, but where does the frontrunning start?  Something to which everyone will have their own answer, but for some traders it does start here.

Greed so going both ways. Are bears getting a bit too greedy? Arguably we won’t know for another year or two but at some point the question becomes irrelevant.

What can be relevant instead is hodl. That can be terrible advice, history might not repeat, but at these levels you can easily get trapped as one little spark and we’re back to sidewaying at $30k with $20k not to be seen again.

We’re not saying that’s likely, but it is certainly possible. All miners are probably under at this point unless they operating on free electricity, but no one of size gets free electricity. The hashrate should start falling, but it lags. So where do you frontrun?

Where fundamentals are concerned, bears are saying it’s a new paradigm, bitcoin neva during recession, so they’re basically saying bitcoin is dead.

Fine, you can have your euphoria, but 2020 was a recession. A depression even. Sure, a blip, Fed printed everyone out of it. Would Fed do anything different if we go into a proper recession this time?

Also is this recession meant to last forever? Or are they suggesting instead that it was an era of printing, and now it isn’t. Well, in 2006 did they buy all them houses with depositor’s fiat, or did banks just print money when they loaned to anyone who asked?

Fractional banking, that’s not going to stop. And nowadays we don’t even have fractional banking, we have no anchor at all in fiat, with savers’ deposits useless to banks, which is why they still giving you nothing on your savings.

That may change, and so a reasonable argument can be that bitcoin will have more competition, but gold, stocks, startups, commodities and plenty of other assets have been competition.

In 2006, the stock market was at all time highs. Interest rates were a lot higher than currently. Fundamentally therefore there is no change because Fed printed to pretend there is growth while commercial banks will print to get real growth. Thus in both instances it’s a growth paradigm and if there is no growth, then Fed will have to print for it.

And finally as for too much money slushing around, chasing risky investments, there was a lot more money flowing in 2006 when interest rates were a lot higher. Also, the only investment you should chase is one that has room for growth, the more room the better. Does bitcoin have room for growth, at least back to $70k?

That’s for time to say. For now, we have to listen to the bitcoin is dead song again. A classic, though one does wonder at what point we’ve heard it enough that we instantly switch it off.