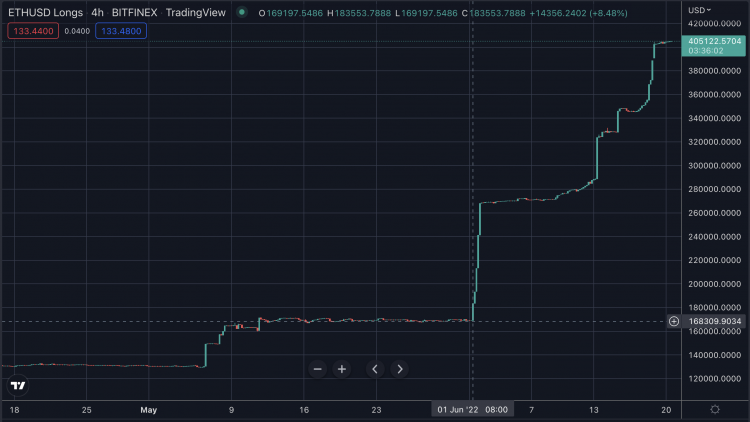 Bets on ethereum rising on one of the biggest crypto exchange, Bitfinex, have risen to their highest level since November 2021.

They’ve almost tripled since the beginning of this month, with 405,000 eth, worth about half a billion, now going long.

As eth’s price continued to fall, a further spike on the 13th of June increased longs to ◊320,000.

Then the plunge below $1,000 this weekend upped them above ◊400,000 for the first time since ethereum began to fall.

So the market clearly thinks ethereum’s price is currently at the lower range, and is even undervalued to some extent.

These are Bitfinex longs, so low margin and usually with a calculation of months or sometime even years.

Some of them consider it like taking out a loan, but in a collateralized way so no need to complete banks’ paperworks.

They’re thus becoming more and more confident that the price is worth not just a buy, but a margin buy.

They can be wrong however, and sometime for long. But with a very low margin of just 1x or 2x, they might also be able to hold for long.

So the question here isn’t whether they are right or wrong because no one knows, including the longers. Instead the only information we can gain is that a ‘consensus’ is growing price is now a bit too low.

Price might not care though, but more might hold at these levels, more might buy, and the lower the price goes, the more that is the case.

Bitcoin longs have increased too, above 100,000 BTC now. They too might have to hold for long, unless we get a nice big bounce.