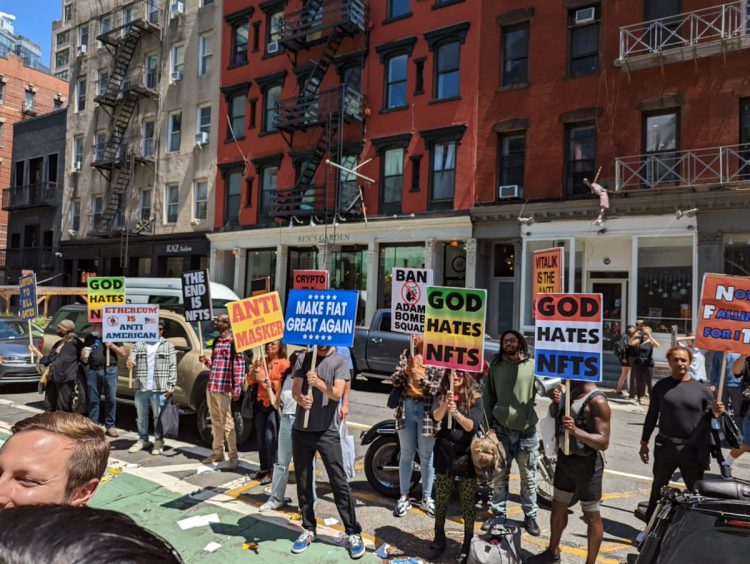 Nutjobs! Why does everything have to be divisive. NFTs aren’t political! No need to buy if you don’t like. What has America come to.

Those are the first impressions when one learns people are protesting NFTs ahead of NFT.NYC, except it’s staged and so we get very different second impressions.

It’s funny, and sure staged or not, it might vilify some NFT haters who at first look are portrayed as nutjobs.

To be fair, that’s how they come across online with their seething ree and repetitive broken tape non-points that some corporate media article fed to them.

Anti Meta Masker. Funny, and stings. Some people still wear those masks and plenty would call those the nutjobs.

Listen to Bill Gates. Ok, nailed it. Make fiat great again, the car presumably. Ethereum is anti-American… because the patriots are now nutjobs?

Yes, funny… conservatives. Or are we finding politics where there is none? And it’s not even the politics, it’s more… is this something that should be joked about?

Do we want to caricature NFT haters? That’s a bit, thuggish isn’t it. We’re right, you’re dum, and here we’ll dehumanize you too.

Harsh maybe, our critique of the… well, is this a critique? We feel violated to be honest. Sort of cheated. From a shock of, oh my god, why is everything ree, why can’t they just mind their business. To, should we even cover this because it is obviously a bear dance.

The staging is by the Adam Bomb Squad. This is apparently a cartoon that they claim became iconic and was everywhere, and have now turned it into an NFT, with the project describing itself as “an NFT project 18 years in the making.”

It is a stunt to draw attention to the fact NFT.NYC opened today. The queues went around the block yesterday for collecting badges. There’s no livestream, but there is a billboards’ takeover at Times Square.

The OpenSea guys open the event, so it will be interesting to see whether they talk about some of the technical challenges that NFTs face. We’re thinking ensuring their permanent storage, hashing the jpegs, in addition to potentially hearing of some innovation.

Staging them instead is more an explanation of why we’re in bear. There’s so little left to say apparently that the wise, or the fool in this case, find it wise to spend time on wasting time.

“Bankers were out in full force protesting against bitcoin outside of Consensus 2018 in New York City this Monday.

In a number of placards, bankers show displeasure at constant criticisms of the world’s biggest bank,” was our ‘reporting‘ in 2018.

And does it hurt to say: yes, we got it, we’re in 2018… Bill Clinton showing up again made it clear already.

As it happens we’re also not even a tiny bit inquisitive to wonder whether this is just human nature, the same feels through same cycles.

Instead frankly we just feel a bit revolted. Not even angry to want to slap, just disgusted maybe is the right word. A harsh one, but the arrogance to stage the protest.

Of course plenty will take the staged protest as a joke, some marketers trying to market. They’ve succeeded too, though by a whisker because they do so only to attract… well, we haven’t said a nice word yet.

Because this is clearly a sign that the NFT scene needs to slap itself a bit, or a lot. They’re at a fairly crucial juncture. There’s no guarantee they can come back from a bust. NFTs are cool and we have to make them work, but a lot of hardwork is necessary for the scene to prove itself.

Not to the haters, but to the public and to the critics as well as those on the sidelines which includes plenty of cryptonians who do have crypto, but don’t have NFTs.

This isn’t a time to criticize others for criticizing you, or for any words really. This is the time to gradually and slowly show, concretely and objectively, why NFTs are not a fad.

Because once you get into a criticizing match… well, are the critics too wrong? Sure, you can turn right-click into a meme joke, but it’s just an ID pointing to a URL and that URL might not even have your jpeg.

There’s some blockchain based algo NFTs and there are plenty of other things, but no one can quite expect the very first iteration of NFTs to in any way be perfect.

They’re far from it, and yet they’re necessary to liberate art. The public wants them as the boom showed, but you have to listen to the bust and understand why there is one in NFTs, and most crucially work to win the next boom which is no guarantee at all.

So we welcome the critics and we’ve welcomed them throughout. We’ve engaged them plenty of times. These things are very new, the public needs to be informed, educated, and they need to at least understand why anyone is doing NFTs.

We wouldn’t caricature them because we wouldn’t want to be deaf. Because the point isn’t quite to win an argument, but to facilitate an outright revolution in the financing, production, and consumption, as well as the ownership, of art.

The innovation and variety is presumably still there, but there’s too much noise. Our attention is grabbed by a staged protest rather than whatever might debut at NFT.NYC.

Now of course if this protest was real, they would have deserved the caricature. But as it wasn’t, this is more the NFT scene caricaturing itself.

Two million views of the video, and do you think the public will really laugh at it, or will they see it more as some sort of a sad attempt to keep partying without substance.

Not that NFTs don’t have substance and at the end of the day this is just some project doing a stunt, no one cares and it will very quickly be forgotten.

That’s tough, but there are plenty of low hanging fruits. It’s just that the public right now is not quite sure where NFTs are going and so the builders and the artists have to show them why NFTs are here to stay and are a tool of cultural enrichment.