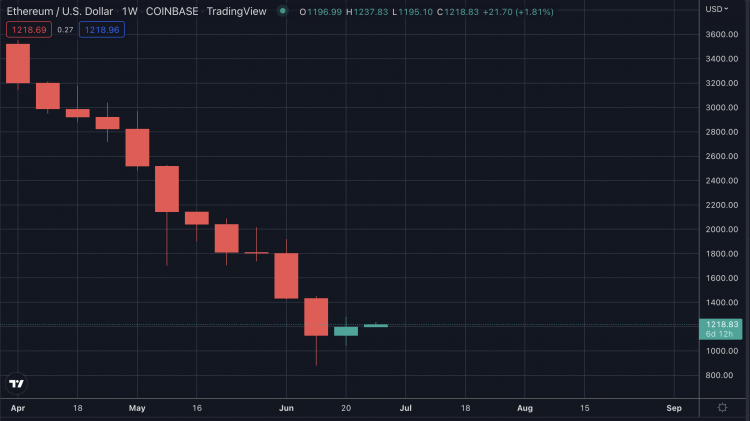 Ethereum has finally closed the week in green for the first time in 12 weeks, or about three months.

The monthly is still red however for the third month running, but the streak of endless weekly red has come to an end.

The green candle that closed the week looks like a plus, more clearly seen in bitcoin. Indicating that the market is not sure of direction or, more often after these long streaks, that there might be a trend reversal.

Strategists at Credit Suisse suggest there will be zero growth for this quarter in US, which almost amounts to a recession, but not quite officially.

Inflation can ease and so Fed’s chair Jerome Powell can go slower on raising interest rates, pausing the seemingly endless streak of red.

Where crypto factors are concerned, it may be that investors tried to front-run autumn. $30,000 held for long in an iron support of sorts, and so it is comparable to 2018’s $6,000.

Suggesting that we may have seen bottom, but a lot more time is needed for that to be established.

What we might hopefully see however is a return to $30,000 with some long sideway there to then very, very slowly rise again.

As $30,000 was huge support, it will now be huge resistance. Bitcoin may well retreat a few times before retaking it, and may even return to these levels, so we may have quite some time to spend here.

Where eth is concerned a big question is whether the bull in defi will be back. A bull which is trapped currently by the lack of capacity in eth, making strategies and investments in defi a more complicated cost calculation.

One way around that would be pooling, or smart contract based investment management. If for example you want to lock SNX to get sUSD to Compound for CRV to get CVX, instead of four or five transactions you just deposit to a smart contract that does it all for you.

This is what Andre Cronje tried to do with Yearn strategies before he got fat on the bull, and then bored too quickly, and it’s something that may be necessary because it is cost effective.

This is a long and menial task as the infrastructure is non existent, which is maybe why Cronje got bored of it quickly, but the SNX to CVX strategy can itself be a token which we can now use in other strategies. Meaning this can be a very lucrative ‘service’ to provide.

Beyond L2s, which might fail in execution and may remain limited in usage – though the zk L2s are not yet out and so we have to wait and see – on-chain efficiencies are one way to get around capacity limits.

Incentivizing the utilization of such efficiencies was one reason why bitcoin kept its own capacity limited, and compared to 2017, demand on the network seems to have been less this time even while usage was a lot higher.

We may see the same in eth where there’s at least some focus and thinking on how to do more with the limited capacity which clearly is here to stay for some time.

Such efficiencies may return attention to defi, which needed a cool-down after scams and the like brought a lot of noise to genuine innovation in early 2021.

Defi has been in a bear since February 2021. They probably have reached bottom, and so if froth returns there, it may be months or even a year before eth feels it.

This so being the part of the cycle where you have to keep an eye for the counter-cyclical because it is always bull somewhere.

Last time it was Chainlink, and before that it was something like IOTA. The problem being it is extremely difficult to identify them until the bear is over, which is when they top and lose attention.

This time the countercyclical may well be defi, which is undergoing scrutiny with some questioning for example the fee model of Aave.

A lot more of such scrutiny may well move the sub-ecosystem, with the other half being NFTs which now amount to $23 billion in marketcap.

It is not too clear however just how much of a positive effect, if any, NFTs have on eth’s price in as far as eth is given to artists that might fiat it.

In defi, the airdropped token model adds value, and so adds to eth’s price. Some NFT collections have now tokened too, and so we get the same dynamics, but arguably you’d think defi contributes a lot more to eth’s price than NFTs.

That could matter because NFTs might bear now for some time, and so even if defi bulls, do they cancel each other out?

Until they don’t, presumably. Until one of them becomes more bull than the other bears, or the other starts moving towards bull too.

And so you get the same picture where we might stay at these levels for some time, though hopefully with a slow recovery to $30,000, but it remains to be seen just how long this green lasts.