NFT-ing Academic Papers, Can it Work? 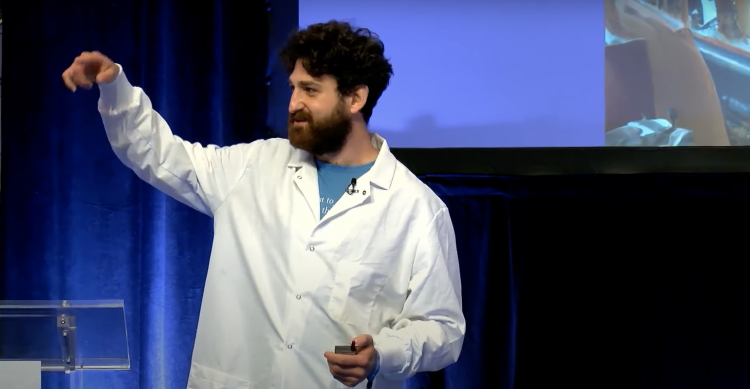 Bill Gates spent $30.8 million in 1994 on the original of Leonardo da Vinci’s “Codex Leicester,” something easily available for free online or as a copy.

Yet the original book is worth millions just because it is the original. How much would Nicola Tesla’s patents be worth today if they were NFTs?

That’s the question raised at Funding the Commons by James Sinka, a Y Combinator alumni and founder of a number of startups, including Deep Tech which help scientists and researchers bring their dreams to life.

The problem is that we’re getting less bang for our money spent on science with funding levels at record high, but the number of Nobel Laureates has stayed the same or even lower.

There are a number of theories, including that science is just getting harder, but Idan Levin, an in investor at Collider VC, thinks the problem is more procedural. He states:

“Researchers spend tons of time applying for grants, which is mostly dependent on how much publications they have on academic journals.

If you want to get publications on known journals, you need to focus your research on mainstream ideas.

This causes ideas to revert to a mean, and lack of courage to take major leaps that might seem crazy to others.

The crazy ideas, the ones that scientific breakthroughs are made of, get left behind.

With this square-thinking ranking system, the general relativities of our times might get undiscovered.

Many consider this core problem as one of the reasons we don’t see scientific breakthroughs anymore (a lot of the scientific advancement in the last 20 years is incremental).”

Decentralizing science has therefore been proposed, or DeSci. Vibe Bio, for example, just raised $12 million “to build a new way to pursue cures to rare diseases.”

Vibe Bio then uses the money raised from $VIBE token sales on proposals approved by the community to perform drug development work.

“This includes clinical trials, pre-clinical development, and manufacturing, to name a few. The economics of each of these drug research programs is shared between the disease-specific patient community and the DAO,” they say.

LabDAO describes itself “an open, community-run network of wet and dry laboratory services to advance progress in the life sciences.”

They still haven’t fully launched yet, with their aim being to “make both computational and wet-lab tools accessible to all its members.”

The ValleyDAO “aims to accelerate the transition towards a sustainable bioeconomy by funding early-stage research within biomanufacturing.”

And then there’s DeSci Labs,  which has two parts. First, “DeSci Nodes combines IPFS with decentralised indexing to store scientific knowledge as interoperable computational objects for generations. For each uploaded manuscript, DeSci Nodes creates an inventory of research artifacts, an incentive system for replication, a mechanism for validation, and a connection point embedded into your preprint.”

All this ecosystem when DeSci is just being coined, but there are two problems. First, do we hide from the Securities and Exchanges Commission (SEC) or take them head on, and second, what’s the difference between DeSci and Deep Tech.

The Politics of Financing Science

The Securities and Exchanges Commission (SEC) stated in 2018 that the Slockit DAO is a security, a claim that remains very uncontested in a court of law.

The Slockit DAO, as you might know, did not last long to become anything as it was hacked, but it held plenty of promises of experimenting with new methods of building corporations.

From a huge ambition to build autonomous things, like charging stations that connect to the blockchain, it became more a vehicle for venture investing because they were surprised by how much they raised, $200 million when they planned for $20 million.

From there it blew up in imagination. While we were wondering do you pay professionals to carry out tasks and how does the DAO manage that and how do you keep them accountable, it got hacked and so it cut that debate short.

But briefly. The idea was sound and fascinating so, the experiment will keep being tried until it succeeds, with these DAOs mentioned above, and many others, operating quietly.

Yet, is there a difference between funding the Slockit DAO experiment, and something like Vibe DAO?

SEC of course would say no, but what matters is what would the judiciary say. Congress has shown to be of no help, utterly dysfunctional with a proposal coming from our own space still kneeling to SEC.

The judiciary however may have no other choice but to be on our side, or the judiciary itself will be on public trial where this generation is concerned, with the argument here being that although often there is an element of investing in science for returns, the primary aim and motivation – especially where it is patients themselves contributing – is far greater than just money. Thus, these DAOs are more grants than venture funding.

Except we all know the big prize here is breaking the Securities Act 1933 as we have done in this space, and seeing that it has worked as it has spurred so much innovation, want to do in other spaces.

We wouldn’t therefore try to hide from SEC and it is perhaps better that scientists have a clear understanding of what is at stake because although we may think of scientists as these fluffy cuddly beings, their long history shows their huge bravery and if science is to be freed so that it isn’t Bill Gates owning such books, but we the public, some bravery will be needed.

Because at some point, if this catches on, the rich will use the law to keep their unjustified privileges of being the only ones to have the right to fund ventures, including scientific ventures, and the only way the public can win is by ignoring these specific laws.

There’s political cover as plenty in high places do support, and that includes plenty of the rich themself, with the judiciary yet untested but they risk a loss of trust in the judicial system if they are seen to stop scientific funding, something that would then turn attention to a focus on disrupting the legal system which badly needs some technization.

“France is betting on deep tech instead of the metaverse,” France24 says. Deep Tech so seemingly being the term they’re using to describe an emerging industry where science and tech overlap.

It’s not a great term, but it is sort of catchy. Same for DeSci. That’s not decentralizing science, which is of course already largely decentralized. But like Deep Tech, it conveys the idea better than tech and science.

Yet both are aiming towards the same thing, and that is turning these books or academic papers into actual products, getting science out of the ivory towers and to the mainstreet.

That’s a goal anyone would support, especially the government, which itself may well fund or contribute towards this goal.

The rise of these two terms so showing there’s potential in concentrating on funding science startups, which is ultimately what these DAOs are though with more public engagement than a traditional startup.

Would it work? Well, these are often longer term investments, even beyond a decade, and they’re riskier than many other investments.

Yet the token aspect boosts incentives because it super-charges speculation on ideas, and since it would be open to the public as well as global, people directly affected or niche interested as well as deeply knowledgable of the matter may be sufficient in number to bootstrap ideas that a VC might turn down for countless of reasons.

It is therefore a way to bring science directly to the public, and so re-energize the scientific field as well as make it more cool because there’s potentially money to be made.

The downside is that at scale, the speculation aspect may gain greater importance than the science, but we should still be left at the end of it with more innovation, far, far more, than otherwise.

While where the NFT aspect is concerned, why not NFT academic papers. But there’s so many of them and so few that make history, that the NFTs may not be worth much.

However, it’s a new idea and enacted, it’s a new thing. So you’ll get geeks, maybe financial houses, ‘kids’ now reading papers to try and figure out whether the NFT will be worth much in a decade or a century if they pass it on to their own kids.

Crowdfunding at its finest in theory. In practice, very noisy speculation with pop culture tending to have an effect of overvaluing something in the present while what will be valued is overlooked.

Yet, that’s what used to be the case and we’ve never before had such level of globalized access to knowledge, or indeed global funding of science through DAOs.

Human nature however perhaps doesn’t change and is the same everywhere, but DeSci is intriguing for its potential and it may well turn out to be a great experiment.

Although in the 2010s there was web2 crowdfunding and there’s still web2 sites to donate scientific grants, with the token element, with the public funding element, and with the global level of access, it is one of the radical suggestion of our time.

Because this is happening as code is upgrading paper, and there is of course a lot of paper in science.

Work Begins on ZK Scaling the Ethereum Base Layer