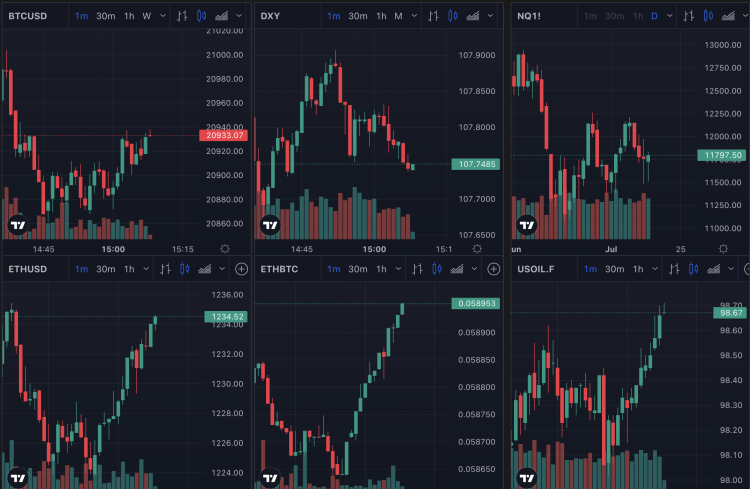 Bitcoin and other assets, July 2022

Oil is a bit up as well, 10%, from $91 on Thursday to $99 currently on some rhetorical politicking as the Biden team tries to manage expectations ahead of landing in Jeddah today with an unnamed US official ‘leaking‘ to Reuters that “the United States does not expect Saudi Arabia to immediately boost oil production.”

Saudis said last month they are to boost production to send it to pre-2020 levels, with this high stakes visit potentially determining just how aggressive Fed will be.

That’s because if diplomacy fails, the United States might have little choice but to use the brunt tool of interest rates to lower energy prices.

On that front, the dollar remains stronger than ever in the past two decades, though a bit down from 109 to 107.7.

Just how long the dollar can keep these levels will probably be determined by the wit, or lack of it, that Saudis show and soon by Europe.

The European Central Bank (ECB) has followed our timeline for raising interest rates, with it beginning just now to go slowly so as to potentially harness a once in a two decades opportunity to shake the economy out of stagnation and into good growth, 3-4% a year.

While the US has been contracting with inflation not caring anyway as the artificial energy constrains mostly contributed to that inflation for much of this year, Europe has been growing.

It is probably an opinion choice whether growth is better than inflation, with the European central bank walking on a very tight rope, yet seemingly with some confidence that the public won’t lose control and self-fulfillingly cause run-away inflation as Fed fears.

Europe starts from a lower point, negative interest rates, and will have a longer and maybe even a slower journey than Fed to get to 2%, arguably a necessary line for growth as banks need incentives – profits – to lend with interest rates being their profits.

Keeping the economy on the fast lane, or the good growth lane, during that period and maintaining it there for at least a decade, would be the prize.

That would necessitate some bold reforms, especially on investments liberalizations, but for once Europe has a chance to properly grow.

That’s while China might be headed for a contraction. Their GDP is down by $1 trillion in 2021, and may well be down in 2022 in dollar terms, with the pandemic year potentially being the very peak.

That may give room for Europe and USA to absorb much of the investment that would have gone to China, and so the two decades of stagnation may well be beginning to come to an end.

As a fixed unit of measurement, bitcoin ultimately should benefit significantly from productivity gains, with its most recent movements probably more due to the clearing out of the Terra fallout.

Celsius is now the latest to file for bankruptcy, though they don’t appear to be bankrupt in the common usage of the word, but more confused in mixing the role of active investment management with that of a courier.

Coinbase is a courier. You give them eth to stake, they stake it for you, and that’s that. Celsius was more a traditional investment manager in practice. You give them money, and they invest it however they want, sometime gaining, sometime losing.

Traditional investment managers pass both the gains and the losses to clients. Celsius however naively promised only a green APR, and so they’re now bankrupt even though they could have just passed on the losses.

The sum involved is just $1 billion, suggesting all this has been blown way out of proportion and has been exaggerated to no end with Three Arrow Capital losses also at just $3 billion.

All of which means this is good for bitcoin, and yes for real, because a similar Luna style crash in traditional finance with Lehman Brothers led to the entire country almost going bankrupt.

The sums involved were somewhat similar as well, $40 billion, but in the traditional system leverage is inherent in the money itself.

Money itself is debt, and that means money itself is leverage. Someone doesn’t pay back, liabilities compound, your counterparties go under, and you get a cascade to nothing.

In crypto, the asset itself is not leveraged, it is not someone’s debt. Contagion therefore is limited because if someone loses bitcoin, it does not affect anyone else.

And so crypto has passed a test of sorts, and arguably has shown itself safer because there is no systemic risk, even if $40 billion vanish in days.

Interestingly eth seems to be rising a bit faster, gaining on the ratio from 0.055 bitcoin to 0.059.

It may be due to Peter Todd suggesting again the fixed limit should be removed in bitcoin, or due to the merge now being just two months away, or just because eth fell more than bitcoin.

A more appealing proposition would be if it was due to defi having the appropriate environment to move towards bull.

It has been in bear since February 2021 due to high network fees. Even just no longer falling may well do things to eth in as far as at least it might not drag eth down and might even feed into eth up.

It should anyway, eventually. Now it’s summer, people are chilling, but come autumn there may be plenty trying to do investment management better than Celsius, for themselves and close acquaintances, without the intermediary risks that a black box Celsius clearly had.

In proper defi, that is, as long as fees remain reasonable. And so the cycle continues, perhaps.