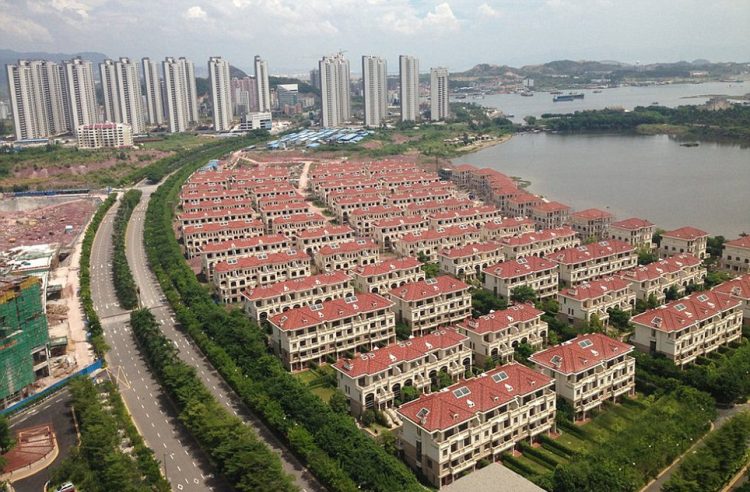 A Ghost City in China, the complex in Huizhou in Guangdong province.

A movement has began in China to default on mortgage payments on pre-bought properties that remain unfinished by property developers.

The “stop mortgage repayment” movement has spread to 274 projects over different provinces and cities with each project having on average 3,000 apartments. Thus more than two million people could be defaulting in protest.

Unlike in US and much of Europe where usually you pay for a finished house, in China you can speculate on house building by investing in pre-built homes for a 30% discount.

That has contributed to many ghost cities, with it still manageable during good times, but property prices are now crashing.

A massive housing bubble has burst, with prices down 8.8% YoY in May 2022, following a decrease of 9.1% YoY in April according to CEIC, a data platform.

State media however claims prices have stabilized, but they have been claiming that for months while a decline began accelerating since September with most of this year seeing a 10% fall every month.

The mortgage default may now exacerbate matters further as property developers tend to use these pre-payments as collateral for further projects.

It may also lead to a contagion as housing troubles spread to the banking sector with four local banks going under, losing depositors $6 billion. Plans are now being announced for some depositors to be repaid.

Property developers saw their share price fall another 5% today while the CSI300 Bank index fell as much as 3.3% with the China Merchants Bank dropping 6.3%. The Shanghai stock index itself fell 1.6%.

“A disorderly deleveraging may not only lead to a credit crunch for developers and massive defaults in offshore dollar bond markets, but also rising non-performing loans for banks, which sit at the centre of China’s financial system.”

Millions of ordinary Chinese citizens that have invested in pre-built homes may now find themselves not only without a home, but with massive mortgage liabilities for years.

That’s because property developers are simply unable to finish these homes, they just don’t have the money. So these citizens are defaulting on their banks.

Local authorities may now be affected as well because they gain income from selling rights to use state-owned land.

They have seen a 27.4% drop in revenue during the first three months of the year as the housing market plunges.

In addition GDP growth came in at just 0.4% for the second quarter. That’s the lowest since data began in 1990, excluding January 2020.

China’s economy therefore may be heading for a contraction for the first time in three decades as the housing burst spreads to all sectors of the economy.

That may have affected US and Europe temporarily, but yields are rising in the west, making investments in Europe and USA more attractive than China as the latter engages in stimulus to avert a prolonged contraction.