Ethereum to Chain-Split, Poloniex to List ETHW in August 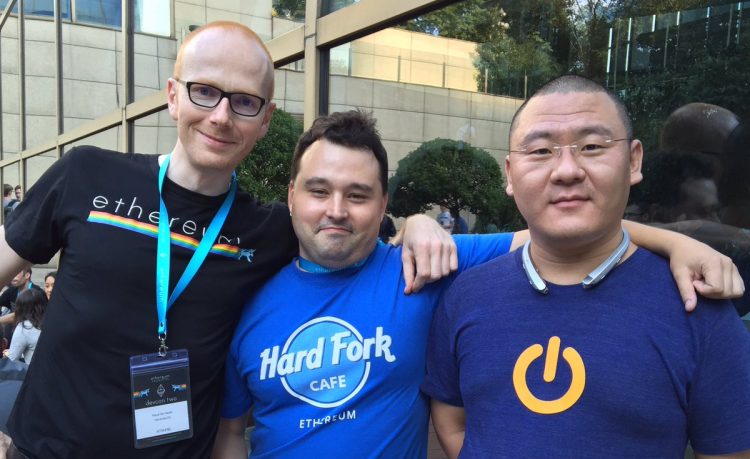 Ethereum will chain-split fork to a Proof of Work (PoW) and a Proof of Stake (PoS) blockchain once the Merge upgrade goes live this September.

“Ethpow will coming soon,” said Chandler Guo, a long time eth miner, while showing a WeChat room with Brian Armstrong present, among many others.

The participation in the room does not necessarily mean a support for the project, but they are serious enough to have a website, a discord, a telegram and a tweeter account.

They are to hold a Tweeter Spaces tomorrow with Flora Li, Director of Huobi Research, suggesting Huobi supports this fork.

Poloniex, one of the first crypto exchanges to list ethereum, is also backing this fork with the ETHPoW project stating: “Poloniex futures will launch ETHW perpetual contracts in August.”

Tron’s Justin Sun, in addition, will launch the USDD ‘stable’ coin on ETHW, making all this sound a bit real.

However, we could not ascertain some details in time for publishing, including whether the fork will happen on the merge block precisely, and if they have any developers – preferably whom they can name. We asked and will update once a response is received.

This will be the first fork of the ethereum ecosystem since the invention of defi and NFTs.

Ethereum did fork back in 2016, but at that point there was almost nothing on the network except for the Slockit DAO.

The fork was in regards to some dispute over that DAO. The solution to that dispute was to create two parallel universes, ETH and ETC, with the DAO tokens redeemable for ETH in the ETH universe, while there was no such redemption in ETC.

Naturally eth prevailed and became far bigger, with some arguing there is no need for an ethPoW fork as you can just go to ETC. However, that would not preserve the entire current value on the current ethereum network itself as ETC has been a different network for six years with almost no defi or NFTs.

Just as with the DAO token in 2016, so too all current tokens on eth, Uni, AAve, BayC, everything on eth will become two.

It’s like a stock split, except here you have an entire ecosystem that has tons of ‘stocks’ and ‘jpegs’ which will magically be cloned.

What that translates to in practice is unknown because the current eth collateralized for DAI, for example, will become ETH and ETHW with different prices.

The eth mechanics will not change because the ticker will remain eth, and so the oracle price feeds will keep pointing to the same eth.

For ethw, a new ticker will be created and so the oracles presumably will have to point to the new ticker with it to be seen how this will work exactly as there has never been a network split while collateralized platforms are running.

For NFTs, in contrast, the split should be sufficient to directly copy-clone them by pointing to the same storage. Giving you two identical apes and two tokens that have ownership over it.

So while previously it was simple in valuing ETH and ETC, now you have to value ape and apeW or uni and uniW on top of ETH and ETHW.

That makes this a different split from previously when it was preceded by huge infighting, and it even has the potential of being an amicable clean split with a different chain id and inbuilt protections against any replay attacks.

The PoW fork can be kept as just a backup in a sign that ethereum still remains very decentralized where the entire ecosystem can be forked by network participants.

Guo himself initially wanted to 51% attack ETC when it was launched by surprise in 2016. Then he kind of joined ETC, but not in a proper sense as he’s just a miner who kept mining and still mines eth.

The ‘crowd’ therefore is potentially ‘manageable’ with no real threat to ethereum in this case because the eth ticker is not being challenged.

However some may find the arguments for PoW itself a threat, but even if one is superior, it does not mean it is perfect. PoW does have its own advantages, chiefly that you can access the coin directly from the network through mining, while in PoS, you have to buy it from someone.

In China, where the government is extremely hostile to crypto, that difference might be significant because the government has tried and is trying to choke fiat points, but they’re fighting on two fronts with direct mining, and so they keep failing.

PoS, on the other hand, has its own advantages: chiefly that it is a far more clean network and can potentially allow for sharding while increasing participation in the network as anyone can stake casually while mining is an investment in itself.

Valuation wise, eth with PoS will obviously be the far bigger network as that has been the roadmap and the plan since eth launched in 2015, it will have all the developers, dapps don’t have to make any changes whatever, and it’s basically eth.

In addition, eth will be deflationary during normal network usage when more than 2,000 eth are burned through network fees and about 2,000 eth are given to stakers in reward.

In ETHW, in its current state, miners will receive about 13,000 eth a day. Generally 2,000 of that is burned, so about 11,000 eth a day will be added to ETHW’s supply, while total supply should overall fall in eth.

It may well be that to compete, miners bring their reward to that 2,000 level, which would allow for a fairer valuation. In its absence, an investor would need an extremely good reason to choose ethW after the initial woopla on listing and forking.

This divergence has so far been the biggest risk for minority chain-split forks. While initially they start off with just one difference, here PoS and PoW, they tend to add other less ‘objective’ changes, putting a cap of 200 million coins for ETC for example.

Because if ethW is to maintain some long term reasonable proposition, then it has to maintain a very strict ‘regime’ of basically being eth, but PoW.

That means reducing issuance to the same level. When data sharding comes to eth, adding that to PoW as well, and basically keep copy cloning everything with zero divergence whatever save that one is PoW and the other is PoS.

Just by the sound of it, one can tell what a difficult task it is. Yet if they can, this would be an excellent way of maintaining the maximum total value in the ethereum ecosystem as far as current eth holders are concerned.

And if they can, long term valuation would be more dicy at this stage because the market has never passed judgment, at least so very clearly, on this specific parameter.

And it is dicy because one can have a subjective judgment on which is better, but we don’t have concrete data on which satisfies market needs better across the globe.

Yet to reach such stage, the ethW development team would need significant competence, and as it stands we don’t know whether they even have any devs at all, though we presume they do, let alone their competence.

It is far more likely therefore that ethW will just repeat previous mistakes as that reduction, in particular, from 13,000 to 2,000 eth is probably far too much for miners.

Yet the market is objective, at least eventually, and to compete you have to be objective too. Making this an interesting fork if one considers that even if they don’t change the issuance from the beginning to align it with eth, survival will force them to do so.

From an investment perspective this is also a very interesting fork because it will be the biggest airdrop to eth holders and eth token or nft holders in history.

As there’s a good reason for this fork – unlike for BSV – specifically that difference in regards to network access which may matter in some countries, the combined value of the two coins should also be bigger after the fork as they can keep more value in the ecosystem together.

All of which means a party is about to begin and it may well be the biggest yet with Proof of Stake and an airdrop bonanza the likes of which we, and the world, has never seen.