Work Begins on ZK Scaling the Ethereum Base Layer 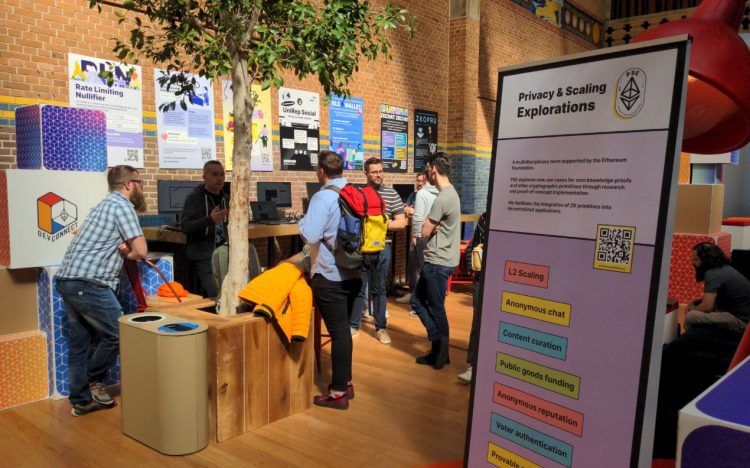 The Privacy and Scaling Explorations team at the EF Devconnect co-working space, Aug 2022

A team of developers funded by the Ethereum Foundation has already began working on using zero knowledge (ZK) technology to scale the ethereum base layer.

In describing different types of zkEVMs, Buterin described Type 1 as striving to be “fully and uncompromisingly Ethereum-equivalent.” He said:

“They do not change any part of the Ethereum system to make it easier to generate proofs. They do not replace hashes, state trees, transaction trees, precompiles or any other in-consensus logic, no matter how peripheral.”

It has “perfect compatibility” as they can “verify Ethereum blocks as they are today.”

In short, this is the application of zk technology to the ethereum blockchain itself, rather than it being a second layer, with the Privacy and Scaling team stating on their GitHub that their goal is to “create a proof of validity for every Ethereum block,” through two proofs.

That’s the state proof which checks the “state/memory/stack ops have been performed correctly,” and the EVM proof that checks “the correct opcode is called at the correct time.”

“After verifying both proofs are valid, we have confidence the Ethereum block is executed correctly,” the team said.

Thus this is verifying the blocks itself, at which point there won’t be a need for all nodes to verify the block, allowing for parallelization and far greater scalability. Buterin said:

“My hope is that everything becomes Type 1 over time, through a combination of improvements in ZK-EVMs and improvements to Ethereum itself to make it more ZK-SNARK-friendly.

In such a future, we would have multiple ZK-EVM implementations which could be used both for ZK rollups and to verify the Ethereum chain itself.”

Currently only Polygon and a newcomer, Scroll, are closest to type one, with both at Type 3 and moving towards Type 2 which is basically ethereum, but with minor changes.

Ethereum thus is envisioning moving towards a future where zk tech is an integral part of the protocol itself.

No other blockchain is working on the same matter as far as we are aware, and none is so advanced as to be months from a Type 4 launch, with zkSync where the zkEVM is through a smart contract, let alone a Type 3 launch with Polygon.

However, for a Type 1 implementation it may take some time, but that it can be done at all and that it is beginning to start taking form, may be a breakthrough.