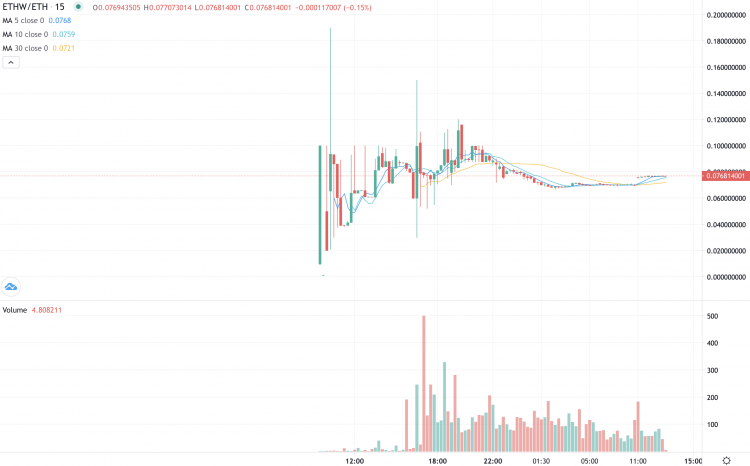 The ethereum Proof of Work coin, ETHW, has began trading on Poloniex, the oldest ethereum crypto exchange, at a market cap of $16 billion, making it a top ten coin.

ETHS has also been listed to stand for the ethereum on the Proof of Stake blockchain. This is trading at 0.924.

An ETHS won’t exist after the fork as it will be just eth, but ETHW will exist. However, prior to the fork this September, Poloniex has launched a market whereby you can split your eth right now into ethW and ethS, selling one, or both, or indeed buying either.

This gives the first signal that ethW will have a market, as well as huge interest with the ethS volumes at just 780 eth.

This high level of relative interest is because this is all a new opportunity to speculate, and therefore it is probable all major exchanges will list ethW, not least because they have to give the new coin to their customers.

At $135 per coin, this will be worth about $16 billion, above Solana and close to overtaking Ripple’s XRP for sixth position as top crypto.

That makes it about three times bigger than ETC, and indicates about 8% of the ethereum holders support this fork.

Much of course may be simply speculation, but 8%, or $16 billion, might come as a surprise to some ethereans.

Not least because ethereum always planned to go Proof of Stake, which will occur in a few weeks through the Merge upgrade.

But the Proof of Work chain will also keep running, giving us an historic first fork of the defi ecosystem which holds $40 billion in assets.