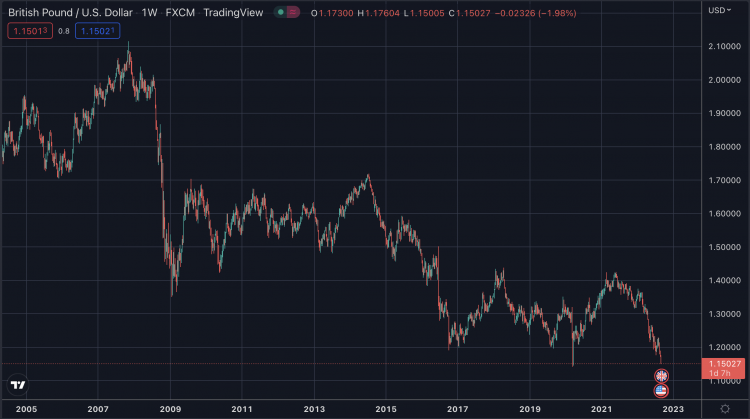 A general strengthening of the dollar is one explanation, but a rise in strike actions now threatens to develop a new crisis in Britain.

Amid the vacuum of a political leadership, with the new Prime Minister to be announced on Monday, trade union after trade union has voted for strike action.

115,000 Royal Mail workers and 40,000 BT and Openreach workers are on a strike organized by the Communication Workers Union (CWU).

Staff in 20 universities across UK will go on strike after Unison member voted for action.

Criminal law barristers will clog the courts too while 1,900 dockers at UK’s biggest port Felixstowe, which handles some 50% of incoming containers, just concluded their strike earlier this week.

Some 15,000 train drivers are expected to start striking in two weeks, while UK’s biggest trade union, Unite, is trying to rally bin collectors to go on strike so that the chaos is a bit visible.

The union of Rail, Maritime and Transport Workers (RMT), which has been accused of having ties to Putin, wants to go even further and call a general strike with the Trade Union Congress (TUC) to meet in two weeks.

Some of these workers are going on strike even after having been offered a 7% rise in pay. They demand more, some want a 12% rise, citing inflation even though such gigantic rises would add fuel to inflation with the Bank of England warning against such wage spirals as it would entrench inflation.

The postal workers however have been offered just a 2% rise, but their median wage is more than £32,000 a year, significantly higher than UK’s median wage of £25,000.

For train drivers the median wage is £50,000, double the national level, with the end result being that rail transport in UK is one of the most expensive in the world.

The equivalent of a £2 ticket for a rail journey in Italy easily costs £20 in UK and more often than not, £50 or more.

The timing of these actions moreover, when the UK economy is at a delicate balance, may add more pressure on supply chain issues, including labor shortages.

Nor is it clear just how much influence Russophilia might have. A prominent Labour MP for example, Dianne Abbot, was forced to withdraw her signature to a Stop the War statement that criticized Nato for showing “disdain for Russian concerns” in Ukraine, according to the Telegraph.

Some labour MPs have joined the picketing line, though to the anger of Labour leader Keith Starmer.

The new British Prime Minister however, who might be the frontrunner Liz Truss, someone Russia has called the new Iron Lady, is expected to take a tough line on these strikers with plans to increase the threshold to 50% in favor of strike action, from 40%, within 30 days of taking power.

This will be just one of the challenges facing her, with a far bigger delicate balance of growing the economy while keeping a lid on inflation likely to be her primary focus.

Her task, if she wins, will be to get out of stagnation, so making these strikes irrelevant. But whether she can remains to be seen, yet the pound so low seems a bit artificial and an indication perhaps that the dollar strength index is around a topping range.

That might be in part because Fed moved faster on raising interest rates, but both UK and EU will catch up, re-adjusting this unusual exchange rate.

Whether they can while keeping good growth, however, is the question of the year and perhaps even of this entire decade.