Dogecoin Leads NAFO as the Propaganda War Heats Up 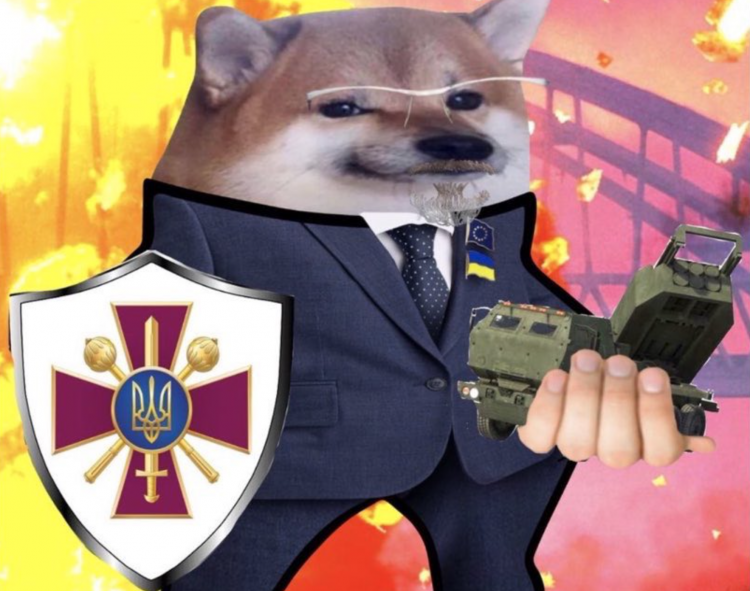 Doge, the beloved symbol of Dogecoin that took the heart of even the world’s richest man, Elon Musk, now leads the charge in the digital defense of Ukraine as the propaganda war intensifies amid troop movements on the ground.

The advance of the Ukrainian army towards Kherson is currently non-negotiable either. They’ve taken some villages, with suggestions they’ve crossed the Inhulets River in the past 24 hours.

They’re also taking up defensive positions in Myrne and Lyubomirivka, just east of Posad Pokrovske which is about 20 miles northwest of Kherson city.

Suggestions are this will be a slow grind however, no blitzkrieg, though with a lot of fireworks so far. They want to surround and destroy the Russian troops stuck in the city, while not destroying the city itself.

This shift in fortune has seemingly led to an increase in Russian propaganda, which has accused Annalena Baerbock, the German Foreign Minister, of putting Ukraine first, ahead of Germany.

Ignoring the fact Ukraine may well be the first defense between a Russian imperialist expansionist army and its march to Berlin, Germany has just announced a €65 billion package to shelter its citizens from the now seemingly falling gas prices.

Natural gas dropped below $9 on Friday, raising hopes we may have seen a double top as the demand side now seemingly forms a cartel as well to in part counter the OPEC+ cartel, which includes Russia, by deciding they too can and will fix prices through putting a cap, though on just Russian oil and gas.

In addition, China’s gas demand has fallen by 25% over last year as their economy sees its biggest slowdown since data began in the 90s when communism fell.

Even China therefore is now selling liquified gas to Europe according to Chinese media. As such, the European gas market might even be flooded, with that mythical proper gas prices crash maybe even coming at some point as current prices are far too artificially high.

In any event, Europe is rich enough to shelter the poor and the elderly, with the choice here not between the economy and Ukraine, but between war and peace where there is no choice since Russia has decided war.

Yet an estimated 70,000 Czechs took to the square in the Czech Republic, protesting agains the EU and Nato, asking for ‘neutrality.’

Neutrality for Czechia would of course mean being invaded by Germany, at some point and eventually, since that is what happened when there was no EU, and since if buffer games are to be played, they will be played in both directions.

Best such games stop in Ukraine, with the Czech Prime Minister Petr Fiala stating of the protesters:

“The protest on Wenceslas Square was called by forces that are pro-Russian, are close to extreme positions and are against the interests of the Czech Republic.”

In UK, the allegedly pro-Putin RMT trade union started off the recent round of strikes by getting their train drives off work even though they earn twice UK’s median wage and even though they were offered a 7% pay rise.

They may have benefited from a political vacuum with the new British Prime Minister to be announced tomorrow, but this propaganda win in the Czech republic does raise questions about what their government is doing, especially if any of these groups have been found to have been financed by Russia, which with a war going on may well amount to outright treason.

The dogecoining fellas deal with more lighthearted matters instead, though still very serious, but they don’t focus on political attacks within Russia, as Russia clearly does in Europe especially with its political attacks on Baerbock, particularly during the election.

Such propaganda may increase further as Ukraine advances. Europe has to stay strong, or the fools will succeed in starting off another buffer game that can only end in hell.