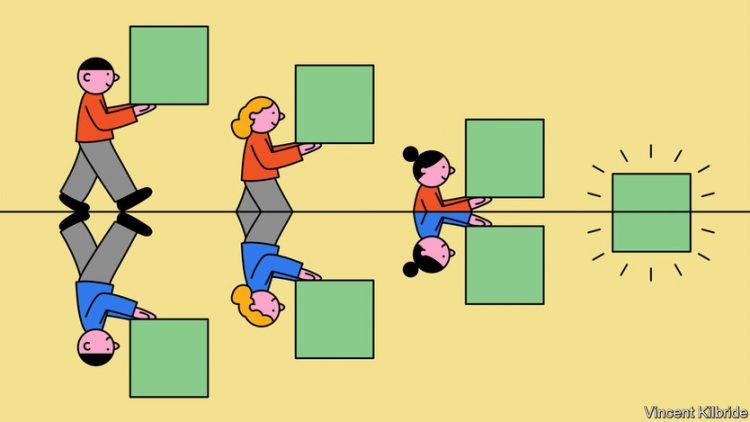 The ethereum merge on the Economist cover, Sep 2022

Ethereum’s upgrade to Proof of Stake next week may be the first technical event the world pays attention to since Bitcoin Cash forked from bitcoin in August 2017.

The merge matters, says the Times, touching on the key theme of environmental, social and governance (ESG).

They quote Joe Lubin, the founder of ConsenSys, who stated that he’s talked with several “major financial institutions” who have been waiting until the merge to become “significantly involved” in Ethereum.

Just how many Lubins they’ll keep waiting after the Merge, is anyone’s guess, but Quartz maybe gives a hint.

They spoke to John Quealy, the chief investment officer at Trillium, a $5.4 billion asset manager that prioritizes ESG investing and has so far not touched cryptocurrency for reasons unrelated to Proof of Work.

Quealy thinks that it will take time to verify that the new system is as green as it claims to be, with it unclear just how much this anecdote is Quartz’ bias as it will take no time whatever to verify ethereum will be green next week because we’ll watch the hashrate chart instantly plunge to zero.

That’s grabbing the attention of energy markets with an oil industry paper using Digiconomist data to estimate eth is not far off bitcoin’s 128.61 TWh per year energy consumption, at 79.79 TWh per year for ethereum.

The Economist has this dramatized by showing a chart of Netherland’s energy consumption plunging to zero.

This element hasn’t been analyzed much in regards to whether the Merge will have an effect on global oil and gas prices as circa 0.7% of global energy usage will kind of vanish.

Some miners may of course go to other GPU blockchains, but their crypto prices are no where near sufficient to support the level of mining that ethereum does until next week.

Both oil and gas may therefore fall further in part due to the merge, with other industries – like GPU manufacturers such as Nvidia and AMD – likewise seeing some short term effects.

But a more interesting aspect of the Economist article is that the author considers the upgrade as showing “decentralised groups of people can do risky, contentious and important things.”

The last time the general public paid any attention to technical crypto elements, it was concluded that bitcoin can’t upgrade, can’t change to even expand its own capacity.

Since bitcoin was and maybe still is ‘crypto’ for a large part of the general public, that eth can upgrade seems to be significant and worthy new information to them.

Or maybe it’s just this author who further implies that since eth can do this upgrade, “time to find out if they can” the Economist says, then there’s ground to reasonably think they might do upgrades that solve scalability, making blockchains efficient at base.

Interest in the merge has also reached India, where their local paper says it will make ethereum “a stronger and more attractive network.”

The merge however has not quite reached a proper mainstream level for the general public. BBC’s news at six will probably not cover it, and Newsnight has not cover it either so far.

So it is not quite attracting the same level of attention as NFTs did when they first debuted last year, or as China closing down crypto exchanges did in September 2017.

Yet. On the day itself, maybe they will cover it because Netherland going off the grid is fairly big news, isn’t it, especially with the energy crisis.

But, this will be good news, and so it might go against their doom bias of ‘the crisis’ with people freezing in their imaginary anecdotes.

Yet, with the new British Prime Minister Liz Truss announcing a huge package where the state covers the cost, the merge may be just about in time for broadcast corporate media to think about waving goodbye to ‘the crisis.’

That’s something that remains to be seen, not whether this upgrade can happen because there’s almost zero chance it won’t happen.

One paper even suggested off hand that it might be delayed again because very complex upgrade. Changing the gas engine to electric while the car is driving at 70 miles an hour, it said.

Or more like pointing your domain servers to a new hosting provider, but we can’t fault them too much as it would be a bit like Trustnodes reporting on physics. We’d probably get some wrong.

Overall, however, the bias on the general reporting of the merge seems to be tilted towards the positive, even though sometime they can’t help themself to smirk here and there, like randomly calling cryptonians ‘boosters.’

In addition, the term ethereum is mentioned often and prominently, without too much mentions of bitcoin alongside, but it isn’t too clear whether that still translates to just bitcoin for the wider public.

However, it was around this time about five years ago when the general media had to grapple, for the first time, with somewhat technical details regarding bitcoin when they were trying to explain the blockchain.

And it was around that time when bitcoin went mainstream in US in awareness, though not SNL levels mainstream reached for… Dogecoin?, last year.

This may therefore be the moment when eth moves towards the mainstream too as the public, perhaps, finally moves to understand that bitcoin and eth are more like Microsoft and Apple, rather than just a new bitcoin.

But whether this upgrade itself will be sufficient for the general public to reach that level of understanding, remains to be seen. Yet, it clearly helps.