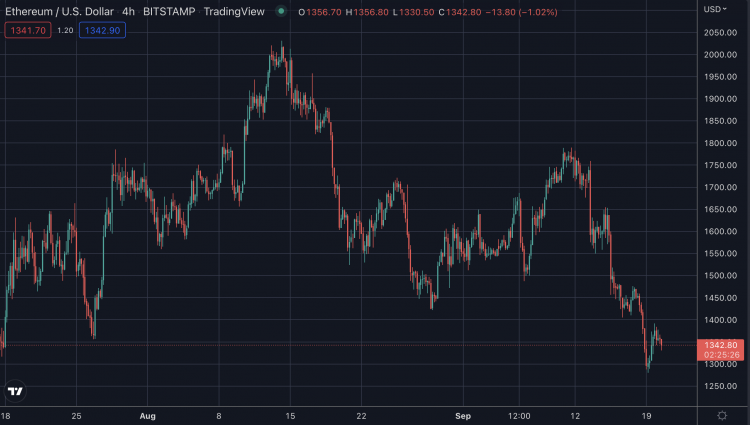 Ethereum’s ratio and fiat value fell by more than 25% following its big upgrade to Proof of Stake, which was featured even on Newsnight.

Expected, perhaps, as the ‘buy the rumor sell the news’ crowd moves out, or rotating traders move back to their initial coin.

The latter may explain the ratio. Undoubtedly some bitcoin holders changed their holdings to eth to ride the Merge hype train, and then left once the merge went through.

But the ratio has not done too badly, at 0.07 btc from 0.08. Some more medium term value, therefore, has been added.

Yet after such a smooth upgrade you’d expect it to hold even better. That’s especially considering that bitcoin is currently more inflationary at the rate of $20 million a day.

At some point that presumably will be reflected on the price, but in the short term clearly the value that may have arrived from other coins was bigger than about $100 million so far that bitcoin has added to its supply more than eth.

66,410 eth would have been added to the supply if the Merge had not gone through, according to Ultrasound. Only 3,700 eth has actually been added.

That’s a difference of $84 million, which presuming all stays the same, amount to effectively an additional $84 million buying eth in the past five days.

Yet price doesn’t instantly reflect supply and demand. A lot of the trading is Over the Counter (OTC) which takes time to reflect on price setting exchanges. There’s derivatives as well, and they may slow down further spot price discovery.

Then there’s sentiment. A dip was expected, so we got a dip. Just in time, the Fed obsession tuned on as well, and so everything that crypto does is because of Powell nowadays in the heads of some.

Powell though can never cut the dollar’s supply like eth just did and he doesn’t even want to. Instead he’s trying to manage a transition from the central bank printing, to commercial banks printing, because his target does remain 2% inflation, year on year.

Yet a lot of the market game is what others think, so Nasdaq is down another 1% today, while eth is holding fine and even slightly rising.

Which may well mean the eth dip was temporary due to the short term bettors getting off, and the price re-adjustment now may be more medium and long term in accounting for the huge change in supply.

That has the demand equation, so obviously if demand changes to lower, then the price may adjust less positively.

But, some new demand may well be added simply due to the change in issuance, an expectation that in itself may at least dim the bear.

With it all being too soon to say, for today perhaps it suffices to suggest that maybe the short term dip has stabilized, and that might be giving way to the less short term considerations.

Likewise the Powell show ends tomorrow, after which Fed might become more boring in moving less bombastically once interest rates rise on Wednesday above the inflation expectations of 2.5%.

A gradual re-adjustment therefore may occur thereafter as the slow lack of new supply presumably at some point starts becoming noticed.