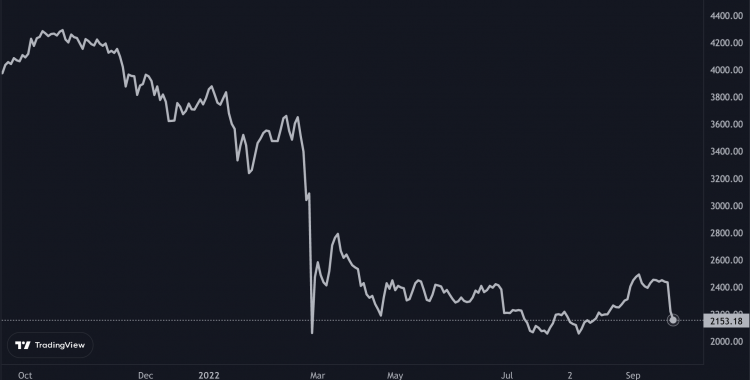 Russia has stepped back from becoming the first great power since the end of the second world war to mobilize, with their president Vladimir Putin ordering what they say is a partial-mobilization, but sounds instead very much like a surge.

300,000 reservists, out of a claimed 25 million, are ‘mobilizing,’ presumably for the front. There is no talk of recruiting students “under any circumstances,” said Russia’s defense minister Sergei Shoigu, but the brothers of some of those students may well be affected.

President Jo Biden’s response has been to raise the law, expected to state that Russia’s invasion of Ukraine violates U.N.’s 1945 charter.

That’s another way of stating that there is no basis in the law to state that the planned annexed territories are Russian territories, implying presumably that the referendums will change nothing on the ground.

Russia made no attempts whatever to make a case for the invasion of Ukraine on recognized bodies, like the UN council. The United States in contrast did have a UN resolution against Iraq which authorized the use of force and for which Russia voted in favor. It just happened to be an older resolution, but still there was some legal basis, while Russia has none whatever.

Standing Back From the Brink

Putin delayed a speech in which many commentators thought he was to order a full mobilization.

No one thought they’d all be going to war back then, but in an attempt to make the other side back down, Russia’s then full mobilization order led to a chain of events in full escalation.

That’s because Russia takes forever to mobilize, about two months, leaving plenty of room for others to speculate. Word got out, and Germany could take no risk, so they mobilized.

Likewise in our times, if Russia fully mobilizes, with millions of soldiers on the march at the borders of Europe, then Europe would have no choice but to mobilize as you can’t take any risk in that sort of situation.

But, Russia has not made such order. Instead, Russia is doing what the US tried to do in 2006 with a surge, send in more soldiers.

In that 2006 the reality of war came home as the surge went pretty badly because the population there just did not want US troops in their land.

That surge led to the air becoming so thick that students were about to take to the streets, but Tony Blair pre-empted them by resigning.

Whether this will repeat and whether Putin would be as smart, is anyone’s guess. But the war remains localized and neither side can back down, so the battlefield decides with of course conventional means.

The population in Kherson and the Zaporozhye region appears to be hostile to Russia as their own polls show a survey has only 65% in the Kherson region being in support of joining the Russian Federation, 72% in Zaporozhye.

If their own poll is putting it at 65%, then even from the Russian perspective, annexing Kherson is just too much trouble, because the actual support is obviously much lower.

In Donbas they put it higher at 80%, but they barely control half of Donbas. In Zaporozhye they don’t even control the capital city.

People, ostensibly from these regions, in Moscow and Crimea can vote though, but they’ve given away the truth in Kherson, which may well explain why they couldn’t advance beyond it: the population is hostile.

Not that it matters, except for Russian domestic consumption, as he has to take all these grounds anyway which he doesn’t control, and has to keep the ones he does control.

Putin was losing and obviously he had to put more men in it. That’s what he is doing.

This endless rhetoric about nukes therefore remains granny nonsense. Granny because naturally they worry, but they’ve seen too much to know it’s bull.

Not least because who exactly would surrender if nukes go off? That just escalates matters in totality and for the entire species, in which case very different forces would instantly take charge.

He’s presumably trying to restrain the response, but you can’t just declare some territory as being Russia and expect anyone to react like it is Russia. So Biden’s response appears to be nothing will change because this is an illegitimate war against a democratic and peaceful nation that never attacked Russia, and against the UN conventions which Russia signed and which oblige others to enforce.

It is also against a treaty that both Russia, US and UK signed guaranteeing Ukraine’s security. Russia may invalidate their signature all they want, and arguably even US, but UK can’t afford it, at all, and if UK will play then what choice does US or others have as history has shown and very clearly.

So this is back now to the local battlefield and some rhetoric maybe needs to cool down on both sides as Russia is just sending some more troops which Ukraine will hopefully handle as they have superior gear, with the rest being just women talking, yes including Putin.

That’s partly because there were concerns about full mobilization, but the surge will also probably re-direct some manufacturing with Putin asking factories to be faster and in bigger quantities, and Russian investors may well be worried about more sanctions.

The question now is obviously what is left to sanction in as far as do we want to be in a situation where there’s no longer any economic response to Russia, leaving only physical choices if a response was necessary?

We’re still quite far from there though. Not as much gas is flowing, but still some is flowing. Oil is flowing. There are Russian banks that still connect to the outside world because of that gas and oil. And there hasn’t really been any enforcement of secondary sanctions.

Turkey is apparently cutting off the Mir card system for withdrawals and UnionPay, following China. There’s a lot more that can be done if it was desirable. That comes with costs obviously, but as an example US and Europe can tell China or India or whoever else, that they won’t export something or will withdraw whatever foreign investment if they keep doing whatever.

So there is plenty of room for sanctions still. The fundamental question however is whether we want to fully cut relations, and on that you have the more social aspect as well regarding visas.

Russia therefore will probably become more isolated, in yet another proof that nationalism is not good for the economy, or peace, or prosperity.