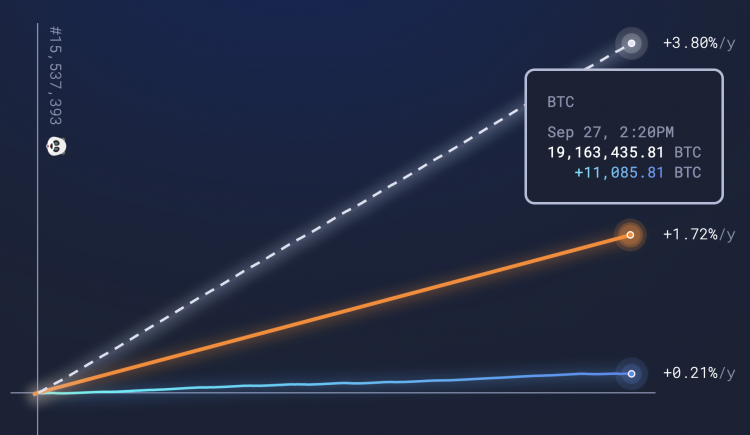 Bitcoin has increased its supply by 11,085 BTC since the Merge upgrade on September 15th, worth $223 million.

Ethereum would have added more than 154,000 eth if the Merge upgrade had not gone through earlier this month.

Coincidentally that’s worth $212 million at current prices, the same level bitcoin added to supply, suggesting there might be some sort of relationship between the fiat amount bitcoin and eth paid to miners and price.

Ethereum’s ratio against bitcoin however does not seem to have reflected the new dynamic in the amount bitcoin and eth have added to their supply.

The ratio instead seems to be sort of sidewaying at the levels it reached in May 2021, during the first part of the bull run.

One can of course speculate that the ratio not falling down to bear levels is taking into account the new dynamics, but it may well be more the case that it is a bit too soon for effects to be felt.

$200 million afterall is 0.05% of bitcoin’s market cap and just over 0.1% for eth, a sum arguably too small to move either market.

Not to mention that miners may have operated a month in ‘arrears’ or more in as far as they may have used eth mined a month ago or two in order to pay current costs.

It has been hardly two weeks since these miners no longer received any eth, and thus any supply crunch may need some more to go through the ‘pipelines.’

The current rate at which the two supplies are diverging, however, is currently running at about $400 million a month.

That’s circa $4 billion a quarter, which gets us to 2.35% of ethereum’s market cap, a sum that may well be more towards the territory where it can move the market.

A re-adjustment may therefore be on the way, but just how much it will be reflected on prices remains to be seen.