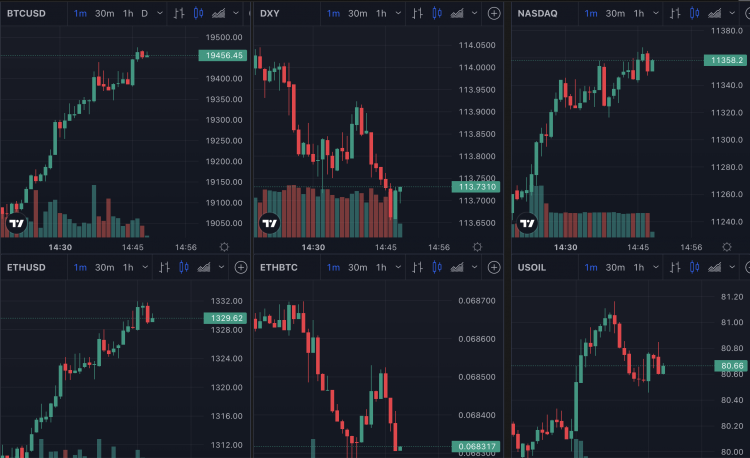 Bitcoin, cryptos and other assets, Sep 2022

Bitcoin has slightly recovered from Tuesday’s dip to above $19,400 as all major indexes rise with Nasdaq gaining 0.83% as of writing.

European stocks turned green too after a day of mostly red, with UK’s FTSE gaining after the Bank of England announced they are to re-start bond buying, temporarily.

Asia however had a difficult trading day with the Shanghai stock index down another 1.58%, while Japan’s Nikkei 225 fell 1.5%.

Hong Kong had it worse with the Hang Seng index down 3.4% while numerous major entities, especially in property, fell by 10% in China and Hong Kong.

So much so their financial media even cried Black Wednesday as CNY shot up past 7.2 to the dollar with some speed, its lowest level since 2008.

PBoC intervened however to make a statement, warning that you shouldn’t expect CNY to just keep falling as it can move in both directions.

That appears to have eased the pressure a bit, but a new report states property prices in China have been in decline for 14 months, and the problem is that there isn’t enough demand.

There’s been a bit more easing therefore in lowering some taxes, especially related to pensions, with futures indicating green for Asia tomorrow.

Markets for the day seem to be a bit more tentative following the Nord Stream jitters on Tuesday which paused sentiment.

The incident as it happens is in international waters, reducing any risks of significant escalation.

Gas in addition is back to being a bit down, suggesting that whole spring-summer narrative may go back to the background.

Crashing bonds are currently the story. US 10 year treasuries rose above 4% at one point today, down now to 3.78%.

Traders may be speculating Fed will follow the Bank of England in ‘temporary’ bond liquidity easing, in addition to this potentially being one of those ‘something broke’ moment.

Any further rate hike by the Fed therefore may be at its limits considering the volatility in forex and bonds.

In addition the strong dollar is hurting some US companies. Apple is down 3.5% today after Bloomberg reported “Apple Inc. is backing off plans to increase production of its new iPhones this year after an anticipated surge in demand failed to materialize.”

Most of Apple’s sales are outside of US. The fall of the value of non-US currencies against the dollar may therefore lower their earnings.

US imports should benefit however and US does import more than export, but at this stage it may well be that if inflation is tying Fed’s hands from below, market turbulences especially in bonds may tie their hands from above.

Some suggest Fed’s plan was to pause at this stage anyway in regards to interest rates, but does that mean back to bond buying, or at least a pause in bond selling?

That remains to be seen. Bank of England intervened because markets became a bit of a political tool after a lot of hype about the budget of the new chancellor Kwasi Kwarteng.

As it happens UK’s opposition has roughly the same plan. During their Labour conference this week they clarified they will keep the 1% reduction of the base tax rate to 19%, and the reversal in the National Insurance tax.

Their only criticism is about the lowering of the top tax rate from 45% to 40%. That concerns only $2 billion, so rather than an economical matter, it is very much political point scoring.

The top tax rate in US however is 37%, and if the City is to compete with New York, $2 billion sounds like a very low cost.

Labor in addition also plans to fund their spending with borrowing, claiming again what is probably Kwarteng’s other half of the plan, that they will invest in what can be called industrial innovation, or tech infrastructure in regards to solar panels, electric cars, maybe hydrogen power, maybe even if we had our way Satellites for all the GPS as well as the space race.

Where the meat is concerned therefore there appears to be almost no difference, except Labour wants to get rid of fracking when that has been a huge success in USA.

As such, arguably there isn’t much room for markets to react as there isn’t a real alternative in UK, but politically of course this budget is apparently so wrong over a $2 billion difference when the similarities are tens and even hundreds of billions.

That same political pressure is not quite on Fed yet, but the market pressure has clearly increased in bonds, raising the prospect that finally they no longer have room to move up.

That could potentially explain today’s little green, but where the printer is concerned it may be more the case the tightening slows down or even pauses, rather than the printing restarting.

That may depend on both inflation and growth figures for the now almost at end third quarter.

If we have another deflationary headline figure month on month, as we did in August, then speculation may well rise that Fed has gone too far, and they may well choose in that case to reverse a little bit by lowering interest rates by 0.25%.

Because if energy prices caused the lagging wider inflation, then a fall in those energy prices may well laggingly be reflected on wider prices, and if they get to deflation stages then Fed has made a mess.

That’s a lot of ifs, but it may well be the wider conversation moves from how much to tighten, to has it been enough, has it maybe even been too much, should it perhaps be easened a bit.

That changes the macro, and so pressure may well ease on assets, with the only question being whether this stage, if it has been reached, has been reached while reversing the stagnation.

In UK, the government intervention raises optimism that growth is back on track. In US, president Jo Biden has also invested plenty, and so this structurally new economy may well be one of growth.

Which is all good for bitcoin, of course, and so the crypto feels a bit like its bouncing to jump, though what it will do remains to be seen.