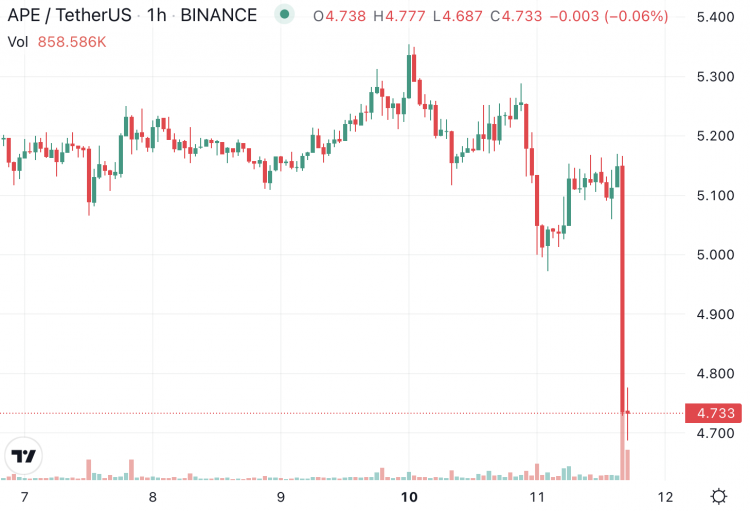 That’s on rumors the Securities and Exchange Commission (SEC) is investigating Yuga Labs, the startup behind BAYC NFTs, over “whether certain nonfungible tokens are more akin to stocks and should follow the same disclosure rules,” Bloomberg said according to an unnamed “person familiar with the matter.”

SEC is also investigating whether ApeCoin, which was given for free to NFT holders, is tantamount to a security.

“As a leader in the space, Yuga is committed to fully cooperating with any inquiries along the way,” Yuga Labs said in a statement.

Yuga hasn’t been accused of wrongdoing and the opening of a SEC probe doesn’t mean the agency will sue the firm.

The value of ape NFTs has intriguingly remained stable throughout the bear at about 77 eth, raising speculations that this might create a very new and unique asset class if they can manage to bull again.

They’re literally a JPEG, but tied to a unique, or non-fungable token, allowing for ownership of the JPEG.

In this case that ownership comes with copyrights, providing a very strong case that this is basically selling digital art.

To make that case further, a physical Banksy collectable was burned last year and turned into its digital version as an NFT, with it then sold for more than the physical piece.

SEC however has taken the view that everything in the crypto space is a security, and Congress has not taken them to account for this maximalist view.

Yuga therefore may either have to register or tie them up in court, with a case already ongoing currently in regards to ApeCoin like distribution matters in SEC v Ripple.

Ripple was also initially distributed for free on the BitcoinTalk forum. Pre-trial work has been on-going in that case for two years, and the trial has not yet even began, but SEC seemingly doesn’t care enough for the opinion of the judiciary to wait for their decision.

In addition, if ApeCoin is a security, then presumably SEC will have to investigate itself for insider trading and/or manipulation regarding this leak of the investigation by this unnamed person familiar with the matter.