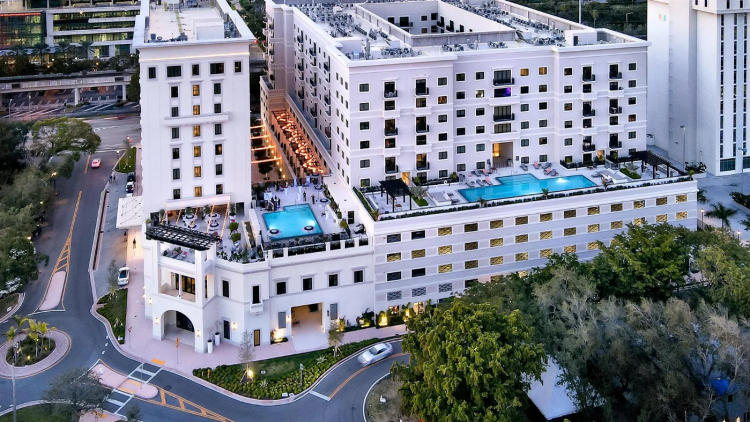 A real estate project by Nolan Reynolds International (NRI), which has over 130 years of history developing and managing commercial real estate properties, has filed with the Securities and Exchanges Commission (SEC) to register tokenized shares.

The project includes the Thesis Hotel in Miami, a 245 room hotel with 8,000 square feet of meeting spaces and three owned restaurants: Mamey, Mamey on Third and Orno.

In the filing they say they commenced an offering of up to $85,000,000 limited partnership units (the “OP Units”) in July 2021.  That was limited to purchasers who met the definition of accredited investors.

“Each OP Unit is convertible into one share of common stock of the Company, which, subject to the Company successfully establishing the required infrastructure, may be represented as digital securities (distributed ledger shares) which are designated as NRI Real Estate Security Tokens (the “Security Tokens”),” they say.

In describing the security token, they say it is divided into three distinct layers.

“The first layer is a public blockchain network protocol and infrastructure such as Avalanche, Ethereum or other layer one public blockchains, atop which the exchangeable form of digital securities token is developed.

The layer one digital Security Token is programmatically tied to XDEX, a private restricted access enterprise second layer distributed ledger blockchain platform operated by the Transfer Agent that functions as an independent system of record and audit network designed to increase the accuracy, function, and compliance of the layer one public network.”

Initially they said they would use an exchange like Securitize Markets, tZERO, or INX, but instead for trading they’re listing on Templum Markets, which facilitates placements for alternative private equity listings.

This seems to be more a traditional exchange, with LedgerLab LLC to act as the securities transfer agent for shares of common stock represented by Security Tokens. They say:

“Like current capital market post-trade settlement processes, when the Security Token is issued and subsequently traded in secondary markets, the broker-dealer and/or exchange platform notifies the transfer agent of a pending settlement for recordation.

LedgerLab records the transfer of the tokenized shares using 10XTS software platform technology, XDEX, which is separate and distinct from other enterprise platforms and other public blockchain or like technology.”

That makes this token far more convoluted and restricted than we’re used to. You can’t just list it on Uniswap, for example, or just transfer it as you please.

Instead you have to go through third parties, in this case LedgerLab, with all the problems that can bring as you need to trust the third party and you’re exposed to counter-party risks.

These fundamental restrictions and what we can call attempts toward the paper-ization of the blockchain, where systems designed last century for paper based commerce are applied to natively digital commerce, is one of the main reason why token projects refuse to register with the SEC.

Because as we can see from this project, all that makes the token a token is taken out in the process.

The token can’t be free on the blockchain, it has to be chained in a second layer where there are strict controls and where the public, global, permissionless, and anyone can access part, is removed.

Leaving you with a paper share in the end, in which case what exactly is the point of the token?

This project is still noteworthy however for being one of the first to try tokenize in compliance with SEC requirements, but the end result is that this is not quite a token anymore.

That’s because SEC has numerous requirements which in a paper system make complete sense.

To prevent counterfeiting of shares, for example, it used to be the case that you’d get a paper certificate with your name on it, and the issuer has your name in the register of shares, so when you go to redeem the share, he checks the register and all is fine or not.

To transfer that share, you have to go back to that issuer and tell him/her, a process taken over by brokers as this scaled.

So the law now says you need a register of shares and there are countless of requirements for that transfer process for numerous reasons, including to prevent forgery.

Applying the old laws and requirements to the blockchain, therefore, creates a fundamental conflict that is irreconcilable because those laws are made for a technology that is completely different: paper.

This attempt to fit in that box has just translated into the blockchain becoming a 19th century technology, which of course it is not.

From an investment perspective however, this project seems to be profitable with a total revenue of $8.4 million in Q2 2022, and expenses of $5.1 million in the same quarter.

Nor is it the first project trying to comply with SEC requirements. They’ve all fallen by the side though where the token aspect is concerned because without updating the requirements to take into account the unique properties of the blockchain, complying with them is just erasing the blockchains.

This has been known since at least 2018 when industry representatives were telling SEC they can not fit into the box, yet SEC kept insisting, and does insist still, that blockchain has to fit into the paper box.

Some see that as an attempt to protect banks and other incumbents from competition and disruption by placing barriers and requirements that can not possibly be met.

Yet the industry at large has ignored SEC instead, or is fighting them in court, because complying would be to kill the blockchain, to kill innovation, and to go back to the last century, which makes the decision of the industry quite easy especially as SEC has been unwilling to in any way address any of the concerns whatever.