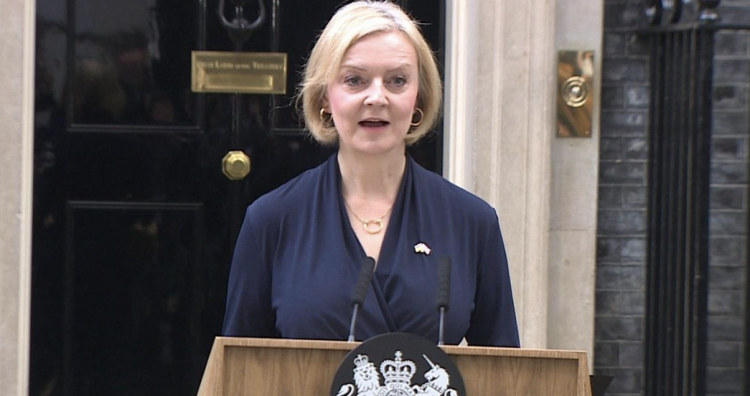 Liz Truss has become the shortest serving prime minister in all the centuries of British government.

In a statement to the British public, she said she has told King Charles she is resigning as leader of the Conservative Party.

“I recognize… given the situation I cannot deliver the mandate on which I was elected by the Conservative Party,” Truss said.

Following two months of chaos in Westminster, and just a day after Truss said she is not a quitter, it is time to face the country, the leader of the opposition, Keir Starmer, said:

“The Tories cannot respond to their latest shambles by yet again simply clicking their fingers and shuffling the people at the top without the consent of the British people.

They do not have a mandate to put the country through yet another experiment – Britain is not their personal fiefdom to run how they wish.

We must have a chance at a fresh start. We need a general election – now.”

Truss however stated that there will be a conservative party election instead within a week.

Sir Graham Brady, chair of the conservative backbencher’s 1922 committee, says the new Tory leader will be elected by 28th, and will take power before the 31st.

Yet, it is unclear the conservative party can now continue ruling without a mandate from the public.

If they coronate Rishi Sunak, the former chancellor whose resignation brought down Boris Johnson, they would go against their own conservative party members.

In addition, there hasn’t been a time in living memory when a second prime minister is selected by only the party, rather than the public.

An internal election without a mandate from the public, moreover, would leave a lame duck Prime Minister and government, whoever is selected, at a time of economic crisis.

The conservative party therefore has to put the country first, as Labour to their credit did in 2019 even when polls were not favourable.

If the conservative party instead continues as a lame duck government without a general mandate, they risk putting themselves out of power for decades when the election inevitably comes, instead of potentially just a few years.

Markets seemingly expected this resignation with the pound a bit up by 0.36%, while bonds are further down to 3.86%.

That’s after political instability following the Brexit vote in 2016, with the conservative party unable to find a leader that sticks in the past six years.

They’ve now gone through another one, with their backbenches full of former prime ministers and chancellors, an unstable situation whoever they select.

So they must now call for an election and let the British public decide just who should be governing the country.