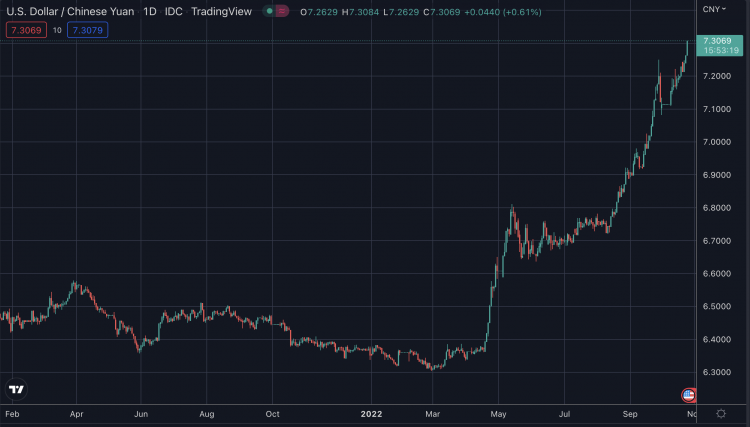 China’s yuan has fallen beyond 7.3 to the dollar, its lowest level since 2008, amid a capital flight that contributed to a stock market crash of 6% in Hong Kong’s Hang Seng index to its lowest level in 14 years.

The Shanghai stock index also fell below 3,000, while the Nasdaq Golden Dragon China Index, which tracks dozens of Chinese companies listed on American exchanges, crashed 14.4%, its lowest level since 2013.

“The sentiment of foreign capital is relatively pessimistic, and the scale of outflows has been relatively high recently,” Chinese state media says.

The return of Xi Jinping for a third term has raised concerns that a change of focus to the economy is not expected anytime soon.

No successor was appointed to the politburo, while the ranks were filled with Xi loyalists, increasing expectations that more state intervention in the market will follow.

Their economy grew 3.9% in the third quarter however, so claims the National Bureau of Statistics, but energy consumption is up only 2.9% this year.

While there has been growth, it’s probably not as much as official statistics say with retail sales up by just 0.7%, but manufacturing grew 8%.

The property sector instead has contracted by 8% in the first three quarters, with no indication of that easing.

Higher interest rates in US is also causing a liquidity crunch as wealthier Chinese investors take their money abroad.

That may reinforce this fall in CNY’s value, but bitcoin hasn’t seen any gains despite fairly strict capital controls in China.

A hostile government attitude towards crypto has chocked the industry there, yet CNY may fall further as China’s central bank might have to continue loosening its monetary policy.

Not least because commercial real estate sales have plunged some 25%, while the growth rate of sources of funds for real estate development is down 24.5%.

Those are deep recession numbers, yet somehow they’re not figuring on the GDP, even though the property sector is estimated to be a quarter of China’s economy.

Manufacturing backlogs due to the pandemic might have temporarily covered the effect, while the fall in yuan’s value might boost exports as goods become cheaper.

Considering the scale of their property crash however, concerns might increase regarding their banking sector as investors default.

Yet for now China is managing to continue growing at a significant rate considering the size of their economy, but they are seeing what might develop into a structural slowdown as political uncertainty puts the breaks on a years long debt fueled boom.