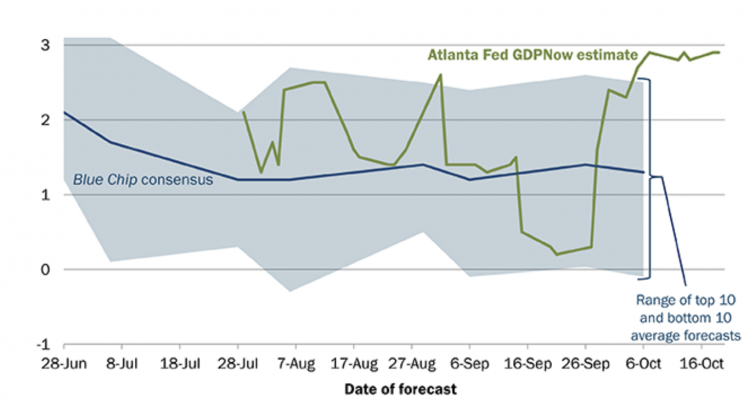 Far from a recession, the United States economy is currently seeing good growth with it estimated to have seen another gain of 2.9% in the third quarter.

That would make 2022 so far one of the best year after 2021, with all three quarters seeing a year on year increase.

The official data for the third quarter will be released on Thursday, but Atlanta’s Fed GDPNow was updated last week to point to some good news on the economy ahead of the mid-term elections.

Not least because US and Europe are still growing at China levels, in part because China has seen a significant slowdown.

This year in fact for the first time in decades, the Euro area may grow faster than China, reversing 14 years of a status quo where Europe stagnated and China mooned.

The question is of course how long can this continue. Fed is to meet next week when another hike of 0.75% is expected, with it then speculated to slowdown to see the effects of hikes so far.

That will bring interest rates to 4%, giving high yields in US for the first time in 14 years. Something that may well contribute to further capital flight from China, and thus to more foreign investment in US.

Europe has gone a bit slower with interest rates there at 1.25%. They’ll increase to 2% as inflation has still not peaked in Europe, and they may rise even further.

The big question for months now has been whether the economy can handle it. Speculation during spring and summer was that in autumn it would get worse, but now they’re speculating that a recession might come next year instead.

And yet some are suggesting that maybe there will be a soft landing, with one thing that no one knows being whether there has been some sort of a structural change to the economy.

The return of inflation suggests that there certainly has been a change, but it is not due to any change in the velocity of money, which has plunged in 2019 and is no where near recovered for usd.

Some sort of a ‘spiritual’ change is not necessarily out of the cards considering 2020, especially with the labor supply being a lot tighter which may have tilted the bargaining power.

The money printing in addition maybe this time has created some value because it went directly to the public, a public that for the first time had months to think about just what they were doing, what they want to do, and how exactly to get there and had money to invest in potentially bringing it about.

And although there’s plenty of bad news, the economy is kind of buzzing. It can be felt too because costs are up and so on, but earnings are also up.

Among other ingredients there’s also the question of whether China is done and now it’s the west’s time to shine.

Finally, the boomers are giving way to the millennials who are more and more taking charge of pretty much all decisions.

We still have our grandpas of course, but less than we used to with it anyone’s guess whether this generational change brings potential efficiencies as millennials are the first digitally native generation, and thus arguably are more sophisticated as well as more informed with this generation being the most highly educated so far.

Anyone of those can change the economy. In combination, who can predict but the world has changed, whether we realize it or not. The 2020s do feel a lot different than the 2010s. There’s a lot more industrial innovation now. There’s also a lot more calm in the West, as incredible as that might seem with the current macro.

And so maybe we’re entering a new economy where the 2021 boom leaves a lasting effect, and the pandemic sort of washes away the stagnation.

But it’s too soon to say whether any of that is indeed the case, yet good growth in Q3 despite the many hikes might indicate that we’re potentially entering a new economy due to structural changes.

Fed’s insistence that they won’t lower rates after hiking them, perhaps should have given that away as the era of free money seemingly comes to an end and we’re back to… well, hopefully not no more boom and bust.