Turkish Lira and Inflation Stabilizes Despite Interest Rate Cuts, Why? 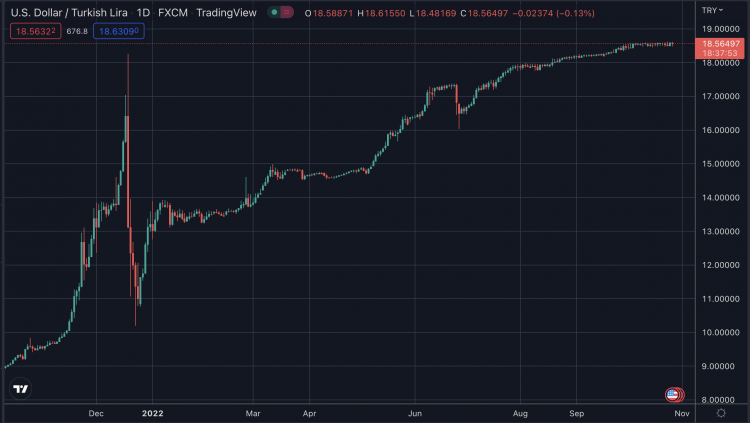 The Turkish Lira crashed from 8 in September 2021 to 18 TRY per dollar. A dive to 10 made it bounce to 14, and since then it has gradually fallen but has recently become somewhat stable at 18.5.

Inflation also began spiking at the end of last year, but has become somewhat stable-ish since June at around 80%.

Interest rates on the other hand are down and down, from 14% in August to 10.5% with suggestions they’ll end the year in single digits.

Those interest rates were at 19% at the end of last year, with the move to lower them blamed for the crash in TRY and the spike of inflation.

But why did the huge summer cuts not reflect on either? Was it all priced in, including inflation pricing in itself somehow?

Maybe, but things like the central bank balance sheet, the commercial banks balance sheet, and the money supply have stabilized after doubling at the end of last year.

Fiat money is a complex mechanism in a public-private partnership that allows for the privilege of money creation through debt.

Now why exactly did all this money get printed at this scale just when they moved to lower interest rates is not too clear, but whatever it was seems to have cooled even though interest rates keep being lowered.

If you’re going to double your money supply, then no wonder there will be inflation and the relative value of your currency will fall, but the spike seems a bit extreme with the commercial banks balance sheet going from 3 trillion in 2018 to 12 trillion in 2022.

Again we have that sudden spike at the end of last year with it continuing to march even though interest rates were kept stable for some months, but despite this going up, both inflation and the value of Turkish lira have somewhat stabilized.

Making it a mixed picture regarding the relationship between interest rates and demand for bank loans, that is new money printing, but the money supply has clearly increased while interest rates have been lowered.

The economy however has also increased and at a fairly high rate of more than 7% a quarter in real terms. That’s some 87% in nominal terms, which sounds incredible but the value of the lira has also fallen significantly since last year.

It may be that this economic growth has now become sufficient to absorb the money supply, and so a new balance maybe has been reached where lowering interest rates does not seem to quite create as much inflation anymore.

If that’s the case then they might be able to get out of a high interest rate environment as if inflation has stabilized then it should start moving towards more ordinary levels in year on year measures, but for how long can they realistically have such huge quarterly growth?

And if it does stabilize, then Erdogan would have done a reverse Volcker, where instead of causing a recession to tame inflation, you let inflation stabilize in year on year measures while hopefully keeping good growth.

That’s a lot of ifs however, with this story still very much halfway through as inflation is still rising a bit, rather than starting to go down.

But if money is created through debt, and that is borrowing, then presumably there’s only so much demand for borrowing, except there’s Argentina.

Interest rates there are 75%, while inflation is 83%. So much for Volcker. And they tried to do a Volcker, they hiked interest rates to 80% in 2018 when inflation rose to 40%, causing a fairly deep recession but they’re now back to the same interest rates with even higher inflation and banks’ balance sheets have not even gone parabolic there, barely increasing by 50% rather than 4x as in Turkey.

The case is a bit exceptional however as Argentina went bankrupt, but interestingly while they saw a deep recession in 2018, they’re now seeing good growth at 7% too.

Making all these factors a lot more complicated than a simple relationship where you have a mathematical if/then response because a lot depends on how humans respond, including whether they increase or decrease demand for borrowing.

Making economics very much a social science, and that includes tools like interest rates or measures like inflation which can depend on supply as well as demand.

It also makes it very much theory without easy experimental observation with Europe’s example of negative interest rates and almost no inflation adding to the fairly confusing mix of just what exactly is the relationship between them.

The only certainty here being that interest rates are a cost for borrowers, but whether borrowers care may be a different matter because the inherent flaw in this system may be the fact that those interest rates can be paid back in totality only by others borrowing more, and therefore in the abstract the level of interest rates doesn’t necessarily matter.

The relationship between all these factors therefore might depend more on how people respond, making this manipulatable fiat money a subjective system with its own weaknesses because it can be gamed if people decided to just keep borrowing.

Hence why there are other tools, including capital reserve requirements, but they eat on banks’ profits and therefore aren’t used much.