Investors Battle the Central Bank Storm of Boom and Bust 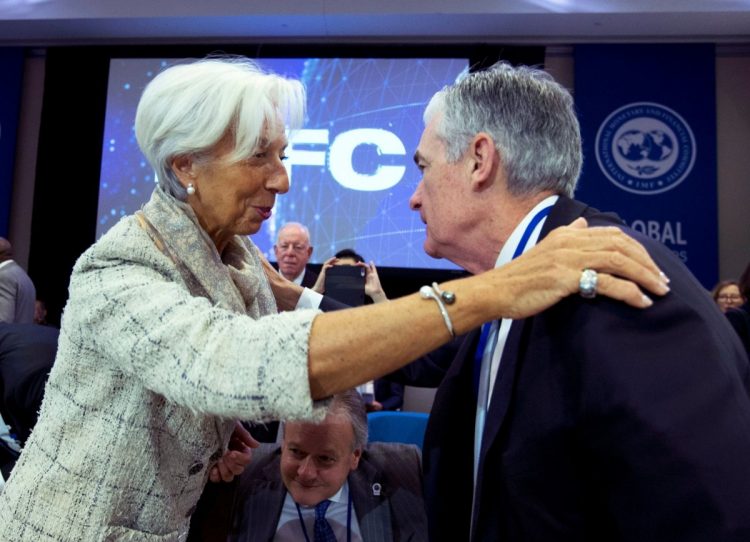 The worst year for investors keeps getting worse for some, with a Facebook crash of 22% in their stock price bringing it now down 60% compared to one year ago.

Silicon Valley may be facing its first recession in close to two decades, with banks reasserting their primacy and control over the economy and indeed governance.

We’ll do what we have to do, ECB’s Christine Lagarde said, after echoing Fed’s Jerome Powell in stating a policy that pretty much sounds look boom and bust.

It was just a year ago, and a bit, when Powell told all that their target for inflation had moved above 2% “for some time.”

Their mandate of course was 2%, and now they tell us that’s their mandate, and their job is the mandate, not the economy.

Just a few months ago however they did not care about this mandate. Instead they gave themself a mandate of higher inflation for some time.

“Following periods when inflation has been running persistently below 2 percent, appropriate monetary policy will likely aim to achieve inflation moderately above 2 percent for some time,” Powell said.

Just what is “moderately above,” journalists kept trying to ascertain, and what is “for some time.” The answer was it’s a “judgmental assessment.”

“Not looking for one month of above 2% inflation,” Powell said in September 2020, but did not quite specify just how many months he was looking for.

We all know the results of this non-mandated policy, and if it was left at that, this would just be history. Now however they are unilaterally changing the mandate again.

Lagarde, echoing Powell, said first of all their aim was to get to a neutral policy rate. She then added they may go above neutral, again for some time, to make sure inflation gets to 2%.

This in effect is making policy and decisions that are not for the Central Bank to make, because they have changed their policy from targeting above 2% to now effectively targeting below 2%, when their mandate is to target 2%, not above or below.

In other branches of government if you exceed your powers, then if you’re the President you get impeached, if you’re Congress you get struck down by the Supreme Court. If you’re Fed?

Technically you can be fired by the President, but then you get shouts about the independence of the bank, an independence which for the Bank of England was only granted two decades ago and that didn’t go too well because the Great Recession soon followed.

Plus, you naturally can not have independence from the public when your decisions so drastically affect the public.

Still, there is no accepted principled balance of power when it comes to central banks, and so their change of the mandate, now for the second time, is going through without even commentary.

We saw what happened the first time. There was a massive boom, though mainly due to opening up, assets mooned, and inflation rose to what some would say is moderate, 4%-5%, then unmoderatly doubled.

Now in US it appears to have peaked and may even be falling quite quickly. The released data earlier today by the Bureau of Economic Analysis says:

That second number sounds close to the inflation number, if not identical. The question being what exactly happens if it moves in that Q3 direction?

Will we see deflation get out of hand? Here they have tools of course. The rates they’ve hiked so much, they can lower, but if confidence is damaged due to their policy of “above neutral,” will they just have to print again?

We all know that rates will probably come down a lot slower than they went up. No one is talking about such rates coming down in fact, but now the US economy has stagnated.

In the year on year measure, it is still growing, but we can see the trend with concerns increasing that it might turn into that orange.

They had one job, and clearly they haven’t done it well, but the worry now is they may have done it so badly that we await potential deflation and a contracting economy.

Are they stupid? Not that they didn’t achieve their aim but seeing by how much they overshot in regards to inflation, why should anyone not expect them to also overshoot in regards to what are deflationary policies, especially considering their planned actions?

Which means, as far as markets are concerned now, they want Powell to make a mess. A recession would be the best news on Wall Street. Any indication inflation is not just falling, but headed for deflation, will be champagne time for bulls.

The public may watch of course the towers and how they’d be partying while tech students fresh out of University probably have no chance of getting a decent job in the next few months and maybe even a couple of years.

But, that’s what you get when you have an ‘independent’ central bank in charge of pretty much all things – money – and which doesn’t face any consequences when they don’t follow their mandate.

There may of course be a comic stand where angry Fed still doesn’t turn on the printer even if inflation turns negative, but interest rates obviously would go lower and lower in that instance.

Whatever Powell might say therefore, hikes while inflation is going down would only tell the market he likes the printer too much.

In a very very technical sense that is not his fault. Congress should amend the mandate to a trio of inflation, unemployment and growth because while unemployment used to be linked with the latter, the mainstreaming of contractual employment has decoupled the measure, and the lack of distinguishment between proper employment and Wendy’s car park, may well make that measure nonsense anyway.

But, we all know that if Congress attempted so, we’ll have commies arguing that there shouldn’t even be any growth because there are starving and homeless people whom should just be provided by the government while growth makes more homeless people – or increases inequality as they would say, plus the planet.

And even if we didn’t have actual socialists in Congress, the combination of all the grandpas would probably take five decades to just tie their shoe laces, let alone actually do anything.

Not that markets care whose fault it is, or why it even is. That it is, is good enough, and what we are seeing is unusual strength by investors.

Facebook crashed today by some 25% at some point due to lower earnings in a year when Facebook investors have now lost half a trillion.

Yet Nasdaq briefly managed to even go into green. Bitcoin is ignoring them completely, keeping its gains, and for bitcoin it can make sense since it has nothing to do with Facebook.

Facebook is in the Nasdaq index however, an index that also has Google which crashed 8%, yet somehow the index overall keeps green.

It has now turned red a bit -1%, while Dow Jones keeps on greening, up 1% even though some of the biggest companies in the world are very red.

The bust, they probably expect, will be followed by the Fed trying to get a boom on again, unless the Fed is on some sort of ideological crusade that wants to bust everything because the Fed knows best, not markets or the economy.

That’s a speculation squared corner however, with the main thought probably being that if these guys have a policy of higher than neutral in targeting deflation, then naturally they will start targeting inflation so as to get it to neutral.

And this way is how we get booms and busts. First by inflation, and then by deflation, all the wealth just trickles up while the elected keep trying to tie their laces, or get thrown out like Liz Truss who dared suggest she was going to review the Bank of England’s mandate.

The public was cheering on that unceremonious exit too, even though everyone was denied a vote – including conservative party members – because it was her that raised interest rates, and it is of course Truss aiming for higher than necessary deflation.

The bond markets also rule when it was the Bank of England that decided just what the yield should be when it wanted to decide. Now everyone understands that again, with the new government back to: who cares about the debt?

Which is why we bitcoin of course, because their game is rigged. At least with bitcoin you know one bitcoin is one bitcoin. People might sell or buy, but the nature of bitcoin doesn’t change, there’s no yoyo interest rates, no mandate some human can just ignore on one hand and tell you they’re following it when asked about the economy.

Nor does bitcoin have to care about any of this. Afterall, it’s not an instrument based on debt. There are no corporate bonds that become more expensive, no mortgage on bitcoin that now has doubled and tripled and even 4x-ed in monthly installments – well no mortgage in general since there’s always stupid.

In some abstract sense people might care because banks have upped their taxes, but bitcoin is too small and adopted more by family offices or individuals that have invested sums which they can afford to lose, rather than depending on 9 to 5 moms’ paychecks.

So it can just wait out Powell and his comic plan to hike so much that he has to lower interest rates, a plan that sounds very much like power corrupts and absolute power corrupts absolutely.