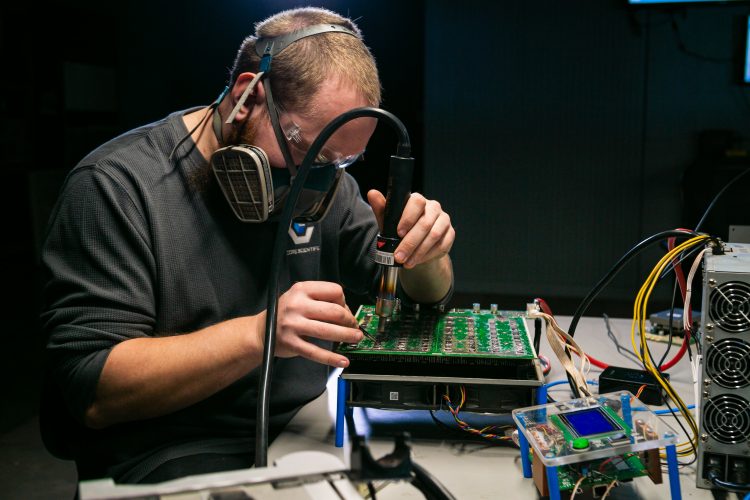 No one can predict the future, but we can all be reasonably sure the laws of physics will still apply.

The news of a default by one of the biggest bitcoin miner, Core Scientific, worth $4.4 billion last summer and now just $100 million in market cap, is terrible for those involved, but is also one of the best news for some time.

In a statement that sounds apoplectic for anyone involved with Core Scientific, the company didn’t mince its words, stating:

“The Company’s operating performance and liquidity have been severely impacted by the prolonged decrease in the price of bitcoin, the increase in electricity costs, the increase in the global bitcoin network hash rate and the litigation with Celsius Networks LLC and its affiliates (“Celsius”).

In addition, the Board has decided that the Company will not make payments coming due in late October and early November 2022 with respect to several of its equipment and other financings, including its two bridge promissory notes…

The Company anticipates that existing cash resources will be depleted by the end of 2022 or sooner….

Given the uncertainty regarding the Company’s financial condition, substantial doubt exists about the Company’s ability to continue as a going concern for a reasonable period of time.”

The claim regarding the now defunct Celsius concerns ‘only’ $2 million of claimed unpaid dues, as well as $50,000 of ongoing daily energy costs.

Small amounts relative to an incredible $1.33 billion net loss in Q2 when they were just about in profit the previous quarter.

So inflation, interest rate rises and the crypto crash has made all numbers go in the wrong direction too much for this company to bear.

A tragedy, but not for the network which doesn’t care and arguably not for investors either because this company was able to survive by depleting their bitcoin savings, by selling crypto.

Now they have no bitcoin savings, and no bitcoin to sell anymore. Unless they’re somehow bailed out, they won’t therefore be able to mine any more bitcoin to insta sell to just survive.

This automatically increases the profitability of other miners that continue to operate because in theory since they’re out, their hash is too.

Yet bitcoin’s hash, despite some brief dips, seems to only know up. That must be because of improvements in Asics computing, but whatever it is, whoever is left mining or is adding more hash is putting less bitcoin supply on the market unless they too want to go bankupt.

At some point an equilibrium is reached. While in good times all can mine at profit, in bear we get to find out the actual global cost to mine, and whoever is above that cost gets out unless they’ve built substantial fiat savings in better times.

An actual bankruptcy therefore signals that such global cost has been found. Coupled with the four months sideway, it adds evidence to the suggestion that if we are not at the bottom precisely, we probably are at the bottom range.

This cost of production valuation doesn’t necessarily have to apply, of course. If there’s some sort of loss of confidence or whatever other extraordinary event, price doesn’t have to care.

But, all being equal, while it might have previously made sense to mine rather than to buy, now it makes more sense to spot buy bitcoin than invest in mining at a loss.

That amounts to a double whammy of sorts in both reducing supply from inefficient miners who couldn’t save and hodl at the bottom, while increasing demand for spot bitcoin from that part of the market that otherwise might have gone to mining.

This signal usually would come around the middle of the second bear year. In 2015 it was a miner that then was big and influential, but now we can’t easily recall, including FinalHash. In 2019 some went out as well, including Bitfury unless we’re mistaken, but in this cycle we appear to be on an accelerated lane presumably due to front-running and pricing-in.

It used to be that pricing-in did not quite apply in this space in part probably because retail did not have much at their disposal. But now we have institutional investors and even Wall Street, and they can tap onto tons of funds either sitting or opportunity costing somewhere.

So, pricing in might be getting in, or the Terra collapse was a sufficiently big unique factor that accelerated the capitulation.

Regardless, now is time to hold more than ever on the balance of probabilities because when miners go bankrupt, who exactly is left to sell.

And whether they’re famous last words or not, they have to be said anyway as we’ve entered network level processes which have kept the balance so far.