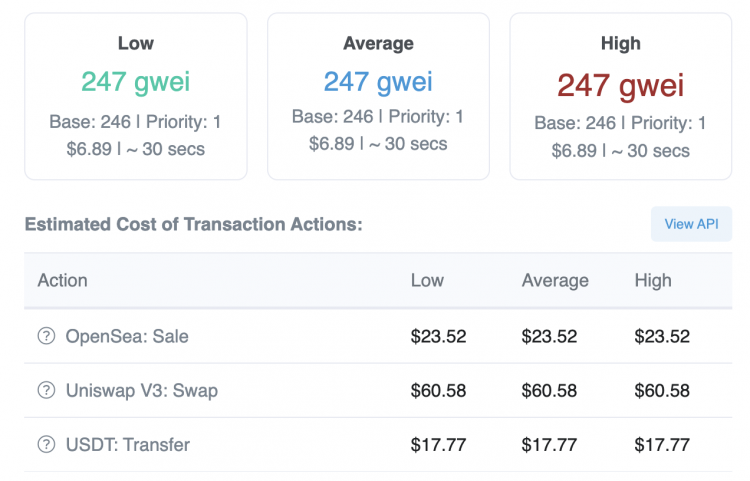 Ethereum network fees have spiked 10x to 318 gwei with a simple transaction nearing $10 at one point while Uniswap transactions reached $76.

All of crypto is red with the combined market cap falling below $1 trillion to $900 billion as the market awaits to hear from Changpeng Zhao or Sam Bankman-Fried on Binance’s proposed acquisition of FTX.

The most spectacular crash has been seen by FTT, FTX’s token, down to $4.40 as of writing from $25 just a couple of days ago.

That’s an ERC-20 token which also operates on other chains. There have been tons of liquidations due to its freefall, increasing demand for network transactions and so increasing fees.

The dive in price of many other crypto assets has also probably led to many liquidations in defi, making it pretty much mayhem out there.

Just how long it will continue is not clear with Alameda’s CEO being quite all day. They are thought to have close to $6 billion in FTT assets and loans. The entire market cap of FTT right now though is just half a billion.

They’ve gone from 2x leverage in FTT’s entire market cap, to 10x, in two days and so they may be seeing some liquidations.

Solana is also being affected more than other cryptos, down 27%. FTX was a big backer of theirs. If they’re acquired by Binance, then that focus may turn to BNB instead.

Neither Changpeng nor Bankman-Fried have made any statements since announcing their intent to an agreement earlier today.

The market is probably waiting for more clarity, including whether there’s a definitive deal.

Most of today’s movements therefore may be due to that uncertainty, including in the case of FTT for which there is no clarification on what role it would play in a Binance acquired FTX.

That then may have led to some deleveraging, including in defi, with even major cryptos like bitcoin and eth seeing down and up spikes.

Presumably however this will calm down a bit, but crypto is still clearly being crypto 14 years on with its intense volatility.