Markets Stunned on FTX and Binance 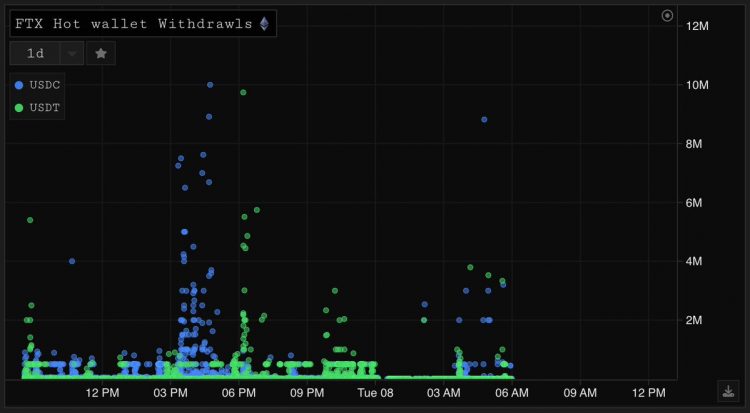 A fast jump in bitcoin was followed by most of the gains being erased. Likewise, a spike in FTT has FTX’s token down to the same levels as prior to the astonishing announcement that Binance had signed a letter of intent to acquire FTX.

Putting aside the specter of Do Kwon and Zhu Su making an appearance, though the latter only said good morning while the former posted a kneeled meme after months of silence from both of them, the crypto space is left to wonder whether this is some catharsis to clean out the June mess, some sort of a billionaires game, or just crypto being crypto.

Needless to say, we had many questions to ask Binance. They’re quite busy right now and only said: “Other than the tweets by CZ, there are no further updates from our side at this time.”

These are probably the same questions in everyone’s mind, so we’ll let them hang in the air:

Can you elaborate on the “liquidity crunch” referred in your statement?

Can FTX itself cover all the deposits? If not, how much is Binance covering?

Can you give a rough idea of how much this acquisition will cost Binance?

FTX had many investors, including Sequoia which invested $420m. Have these investors been consulted, will their shares be bought out?

FTX also has many projects, including a partnership with GME for their NFT marketplace. Any indication on what is expected will happen to these projects?

Is the FTT token still reflective of FTX, or does the acquisition change that?

Finally, how long do you expect the DD (due diligence) and much else to take? When does the market know for sure whether there is or is not a binding deal?

The last question is the most important one as far as cryptonians in general are concerned. There are reports FTX has halted withdrawals. Its CEO, Sam Bankman-Fried said it would take a bit of time to settle, presumably the acquisition.

That leaves the crypto space with a non-binding letter of intent, frozen withdrawals, and unanswered questions.

Some of the complexities however are highlighted in those questions, but still we’d expect some clarity within hours.

It may well be that it was all getting a bit too much. Every FTX movement was being tracked, related projects were asking questions, probably related businesses too.

So they may have thought the only way to make it all stop was to just let Binance take over, but this is the first time in the crypto space that a major exchange has announced intent to acquire another major exchange.

If FTX was clearly in trouble, Binance presumably wouldn’t have gotten anywhere near it. If it isn’t in trouble however, why are they selling themself to Binance?

That leaves room for either they’re a little bit in trouble, rather than completely. Or, Binance doesn’t know just how much in trouble FTX is/may be, hence the qualifier of intent.

The latter puts Binance in a difficult position because plenty may say they should have done that due diligence first before making any announcement.

Prior to that announcement, and prior to withdrawals being frozen, there was something happening, but it wasn’t quite a happening as it arguably is now.

Still, money talks at the end of the day so if FTX is in serious trouble then Binance has left itself room for maneuver.

The best scenario however in the circumstances may well be ‘a little trouble.’ Billions of dollars worth of assets were being withdrawn from FTX on Monday, intensifying today. Even if they had/have all the assets, without customers there is no business.

That however might not quite explain the urgency, unless we couple FTX with Alameda, whereby FTX is basically sacrificed to save Alameda.

That scenario could make sense with an FTX that is sound-ish overall, and yet is urgently sold.

We all know the worst scenario of course, but unless Binance has done no due diligence at all prior to announcing their intent, then the worst scenario wouldn’t make too much sense as long as that intent still stands because why would anyone want to touch an exchange that is actually in trouble.

Instead, with all the information we have and the many we don’t, it might make sense at least at this stage to explain the events as some sort of a saving of Alameda, rather than real trouble at FTX, or a firewalling of FTX if Alameda is in trouble, although we do have to wait for that due diligence first before knowing to a more reasonable degree what might have gone on those balance sheets.