Why FTX is Not Lehman Brothers 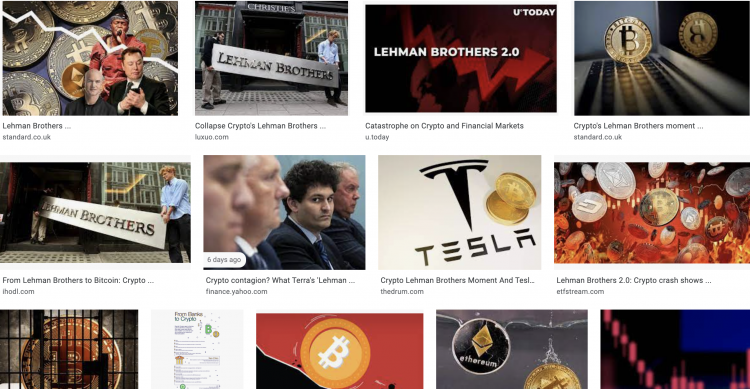 Famous last words, some might say, but cryptos have gone through enough experiences to establish to some level of a reasonable degree that Lehman style contagion can’t quite happen in crypto.

Lehman Brothers as you might know was an American bank that the US government refused to bail out in 2008.

That decision froze lending between banks as no one knew how much exposure anyone had to anyone. Without lending, the payment system came to a halt. ATMs therefore were hours from not giving out cash, forcing Congress to intervene with a bailout.

Unlike banks, exchanges are not a payment system and unlike fiat, crypto is not created through debt.

In the fiat system, if you do not repay a loan, then basically money is burned. This can lead to a cascade that can spiral to a depression due to a fast monetary contraction amid mass defaults with leverage inbuilt in the system as debt is leverage and fiat is debt.

In crypto, if you do not repay a bitcoin loan, then the bitcoin has just moved hands. The supply of bitcoin is not in any way affected, and the blockchain – the payment system – is not affected.

Traders may of course speculate and price might be affected, at least temporarily. In addition, the parties to that loan are of course affected. But this can not become systemic at least up to one million bitcoin as far as it has been shown.

That’s how much MT Gox had and then did not have in  2014. Just what happened there exactly is not clear, but it is thought a hole developed in 2011, when the price of bitcoin was small, and they thought they can slowly cover it back.

Bitcoin’s price spiked however, the hole became multitudes bigger, and MT Gox run out of coins that depositors could withdraw.

This was the first attempt at fractional reserve in crypto, and it did not work. From that has arisen the presumption that if something is wrong, we’d rather it blows up when it’s small because the problem can become 10x or 100x bigger in a short time.

And there have been many such blow ups. Not in the west until this year to the point we assumed it was just a matter of the rest of the world learning the lessons we had, with that expected to continue.

The rise of defi however, and more crucially the centralized crypto finance’s attempt to mirror that on-chain iron proof defi, has seemingly brought new lessons that have to be learned in the west.

“Never use a token you created as collateral,” Binance’s CEO Changpeng Zhao said in clearly referring to FTX. “Don’t borrow if you run a crypto business. Don’t use capital ‘efficiently.’ Have a large reserve.”

Just what happened exactly with FTX remains to be detailed, but it has become quite clear at this point that a crucial rule in crypto was not respected: Proof of Keys.

On January the 3rd every year bitcoiners run a campaign to withdraw their coins from exchanges so as to prove they can do so and that the exchange is not running fractional reserve.

In crypto, depositors have the right to withdraw their coins in any and all times, and at mass, even just for fun. An exchange that wants to last, therefore, needs to ensure that their customers can do so.

It used to be the case, and for some exchanges it probably is deep somewhere in their older pages the case, that you can check your own on-chain balance with there being crypto-graphic methods to basically prove crypto solvency and 100% availability of assets.

Now systems have more sophisticated layers in as far as we can see or find the hot or cold wallets for prominent exchanges and other exchanges with minimal or some effort depending on their size and prominence.

As everything is on-chain in crypto, even exchange balances, anyone can at any point see exactly what is happening, where and when.

It is probably therefore mostly the case that a fractional crypto exchange or entity can only last for so long before it has to answer to the market.

And when they do answer to the market, calamity as it may be for those involved, where the overall crypto system itself is concerned it may well be the case that it is more strengthened not weakened, because for example cryptos can 10x without making a 10x bigger hole.

Still it is not all flowers. It would be a lot better where there could be some sort of perfect system where factional reserve is not possible, except we do have that in self-custodian wallets which come with their own problems in as far as they might be hacked. But there are hardware wallets for longer term storage with Pascal Gauthier, CEO and Chairman of Ledger, stating:

“People have a legitimate reason to worry about the security of their digital assets if one of the world’s largest centralized exchanges ends up in financial difficulties. It’s time for an honest, industry-wide reckoning on the importance of crypto custody.

Except realistically absolutism and perfection is not possible with exchanges necessary to convert and trade in fiat, so ‘own keys’ has to be coupled with market discipline which largely worked fine until this cefi defi-ing.

But that market discipline arguably has not quite been… existent really where crypto systems outside of bitcoin and eth are concerned.

That’s probably because whoever was or is casino-ing there is not quite an experienced cryptonian and that non bitcoin/eth area is more risky ad initio, so the market applied laxer scrutiny.

FTX for example apparently had only 20,000 bitcoins. That’s just $370 million worth, probably because bitcoiners have been around a lot longer and when seeing a new exchange they’d want it to prove itself first because exchanges have, do and can go under.

It also had only 300,000 eth, about half a billion worth, with ethereans and bitcoiners really largely overlapping especially when it comes to these sort of matters.

So FTX may have attracted more newcomers dabbling in cryptos outside of the bitcoin or eth ecosystem or the very high risk takers that didn’t care. In this case those other coins are probably very newcomer Solana and some other coins/tokens we just learned of in the past few days, including the now infamous FTT.

Raising the question as to just how much this might affect bitcoin and eth considering neither used this exchange very much, beyond what it has affected them already.

And it has affected them because in some ways all things in crypto are connected with bitcoin and eth being the way to all these coins down, and then the way out too arguably.

So with an event like this naturally you’d expect price action, but not systemic as the blockchain is not affected. Instead traditional investors may be affected, like Tiger Global which participated in FTX’s latest round at a valuation of $36 billion, include SoftBank, Sequoia Capital, Ribbit Capital, BlackRock, Temasek Holdings, and the Ontario Teachers’ Pension Plan Board.

Individuals of course are affected, like FTX’s CEO Sam Bankman-Fried who has gone from an estimated networth of $14 billion to now just $1 billion according to some claims.

Where crypto overall is concerned however, this is in some way the establishment of supremacy if you like of crypto principles where you have to separate and keep 100% reserves for the exchange part, and risk only what you can afford to lose in the cefi-defi bit.

Unlike in banking where traditional banking is now more investment banking, in crypto, old fashioned exchanges keep being the winner and the ones both rewarded by the market and still standing.

Making it harsh lessons for class of 2022, but we didn’t set up either the curriculum or the school board, that’s the blockchain guy and he seems to have a way of imposing his rules throughout all these years and across the world.

Hopefully we won’t have to repeat these lessons again, as hopefully they become a sort of apriori where you can’t cheat the blockchain even if you have your own database as ultimately you are still operating on the blockchain.

Where the human stories are concerned, it remains a bit unclear what will be done with FTX, but the Bitfinex approach where there are still some assets has worked far better than MT Gox’s old paper system approach as that is ten years too late, and 5 AML/KYCs too many.

If FTX still has assets therefore, they could just apply haircuts and keep going after complete transparency, but they have investors beyond the retail customers with it still unclear just how many of the latter are affected.