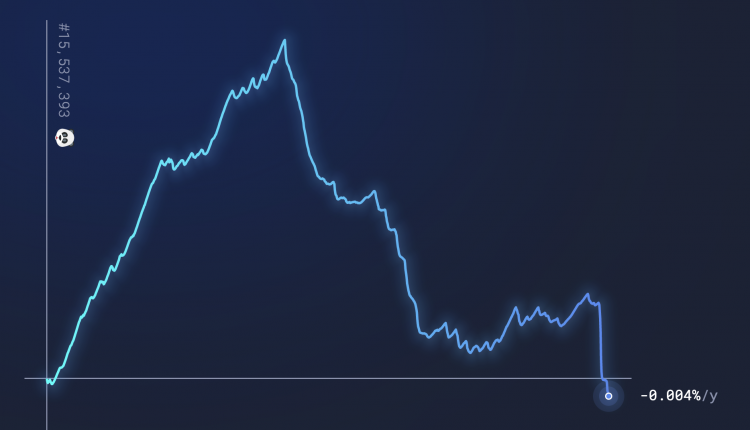 Ethereum has fallen to its lowest since July with the crypto diving to $1,160 after it became clear that not all is well at FTX.

Rumors circulated last night the exchange had a $6 billion hole. As one might expect, rumors are now circulating Binance might back off any deal.

Considering the sensitivity of the matter Changpeng Zhao, Binance’s CEO, has reprimanded his staff for this leakage, but the only real unknown now as far as the market is concerned is just how much is retail affected, and just how much of this $6 billion is more institutional investors.

That price diving comes with a silver lining for eth however as fees spike. The currency has now for the first time contracted in total supply by 842 eth.

The current crypto price action therefore would have been a lot worse for eth without the Merge, making this an event quietly celebrated in some corners.

Yet, there isn’t much celebration. It’s the depth of bear with bitcoin hitting a new recent low to just under $17,000 before slightly recovering.

There’s the question of just how much of this price action is speculation, and how much is more a fallout from the likes of FTT, with stocks also red today, down 1.35% for Nasdaq.

Where crypto itself is concerned, this abuse of trust by a centralized intermediary in many ways shows the superiority of public blockchain based cryptos.

But the quick rise and the just as quick fall of Sam Bankman-Fried also shows the ruthlessness of crypto, with defi arguably being the winer long term.

Short term, any potential recovery of crypto has been delayed. We always said we had to get through November first. Previous bear first years have tended to be the final cleaning out bit in that November.

So fundamentally crypto is strengthened because any hole at FTX could have gotten a lot bigger in more upwards volatile years, but obviously there’s people affected and hopefully they’ve diversified enough, including among exchanges, to only lose a small proportional amount.

Fundamentally ethereum’s reduction in supply does also matter, even if it is not from a nice outcome, with both ethereans and bitcoiners thought to not have used FTX that much.

In addition Bankman-Fried claimed $6 billion in crypto assets was withdrawn before withdrawals froze. We haven’t looked to verify just how much of that is supported by the blockchain, but close to $1 billion in bitcoin and eth is thought to have been withdrawn, in addition to at least $2 billion in stablecoins, so he might be correct.

On the other hand, he deleted a Tweet where he claimed he had all the assets, so we’ll have to wait for the on-going audits but hopefully retail won’t be affected significantly.

There’s references to “loan commitments,” so this might be a case where institutional investors bear the brunt which attracts far less sympathy because they should have done their due diligence.

Hopefully however we have full transparency as soon as possible as the uncertainty might be worse, but naturally it is a pretty sensitive situation with Changpeng having to decide whether it can in any way be salvaged – maybe some Bitfinex method – or not.