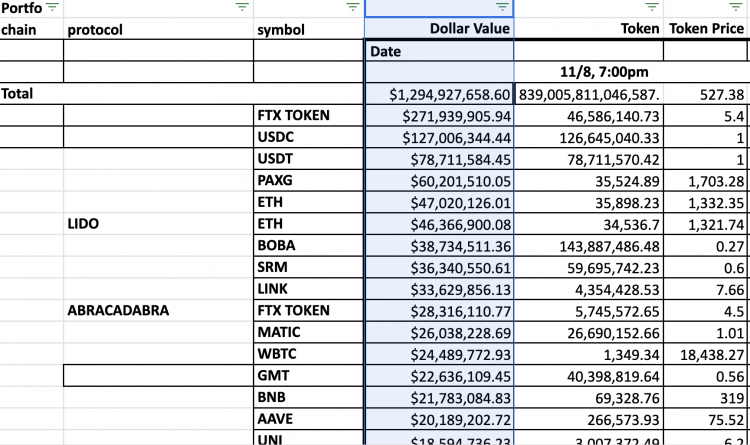 Some of FTX's alleged holdings, Nov 2022

FTX may still have $1.3 billion in assets according to an unverified leaked spreadsheet that seems to be based on Zapper, a blockchain dapp that allows you to aggregate defi holdings and assets.

The spreadsheet (downloads) claims they have various holdings in entities like Compound with it likely including the assets of Alameda Research, the hedge fund arm of FTX.

It does not contain any assets outside of the eth ecosystem, including Solana tokens, with speculation quite intense right now as to what exactly is left at FTX.

That’s because the amount of assets they have left may well determine whether the exchange can be salvaged, although there would be many questions as just how, including who would keep it as a going concern.

Fundamentally however crypto has had two models so far. The MT Gox way, or the paper route that goes through years of lawyers feeding off the assets with many court fees and a complex distribution system that where depositors are concerned means they won’t see the funds for years.

Or the Bitfinex route, which basically gives depositors a haircut and a profits-token where they are entitled to the exchange’s profits until they are repaid.

As a simple example if 1 eth is frozen in the deposits and they still have enough eth to give everyone say 20%, then you’d get 0.2 eth and an FTXdebt token worth 0.8 eth of their profits, with that 0.8 maybe being in the current fiat amount.

The MT Gox route would be you’d get zero, and then you’d wait a decade, and then maybe get 0.1 eth after all the lawyer fattening fees.

The Btifinex route would also give all the rest something now, including employees who can potentially keep going if the exchange can eventually recover to earn the trust of depositors.

That would mean someone else other than Sam Bankman-Fried would have to take over, that FTX would have to implement Proof of Reserves, and even then maybe it works out for non-retail.

For retail naturally it works to get whatever asset and now, and if this is challenged in court there are arguments from equity to put retail first above employees, and certainly above shareholder investors.

The latter come last anyway. Employees tend to be protected, but in this case they said nothing when they should have said something, and the maybe keeping your job is certainly better than not keeping it for certain.

Then there’s the loan providers. Here too one can argue they come after employees because a loan by definition is a risky matter, while retail deposits by an exchange that confused regulated FTX.US with FTX are at the very least not meant to be as risky as a loan.

So retail first. If they have any assets, distribute them to retail. Any court activity can then happen later when no one cares, but the suggestion here is that something is better than nothing and no one can really reasonably argue with retail-first.

Except it isn’t too simple. Binance is still considering the matter, even if they’re leaning. We don’t know how many customers FTX had, but it obviously was some. Many might say they’ll all run away, but some of them might be kept if it becomes clear the new FTX is completely different with Proof of Reserve guarantees.

The question then becomes a more subjective: who would want to take charge of that. But, we do have tokenomics, they can become here debtonomics, and so what exactly is the problem with the Bitfinex way?

Fool me twice, but in that case it would rek this model too, so they better not do such fooling.

In addition as a very new thing, crypto has an opportunity to do things in a new way. Businesses have failed since time immemorial. This generation and this industry has now to consider how we can improve on how we deal with it, and the Bitfinex way was of course a great improvement on MT Gox.

The Bitfinex situation was very different from FTX however, and we don’t know just what proportion of the retail deposits FTX has, but we do have the opportunity to ourselves decide how this should be handled before the others have their say, which they will, but the crypto industry gets the first bite and so needs to consider all the options within its power.