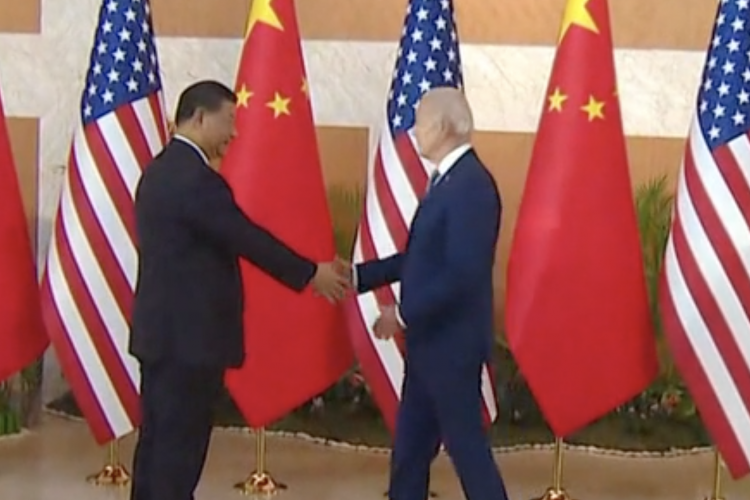 “The vast earth can fully accommodate the development and common prosperity of China and the United States.”

So said China’s re-‘elected’ president Xi Jinping in the first meeting with the US president Joe Biden since he was elected in 2020.

The three hours meeting has been called a detente. The task apparently was to just stop relations from getting even worse.

Some call it a reset, but there was no change of position, echoing potentially the ‘reset’ that Vladimir Putin also got in his third term.

That being the crux of the matter, and yet there was no movement on it at all. Instead, China’s response was:

“Xi Jinping pointed out that the US pursues capitalism and China pursues socialism, and the two sides are taking different paths. This difference does exist today and will continue to exist in the future.”

At the same time they turned around to say they are against decoupling and breaking links, but won’t provide any assurances that foreign businesses or investments in China won’t just be socialized.

“Xi Jinping pointed out that freedom, democracy and human rights are the common pursuit of mankind and the consistent pursuit of the Communist Party of China.

China has Chinese-style democracy… We are also proud of it.”

Argue with that. Words are just a combination of letters, so what does it matter their meaning or indeed the fact that democracy is not a style, it’s a package.

Still, freshly elected for a third term, Xi had to be met. China has chosen to present a stubborn front, so looking to see how the two can move forward is of course what you’d expect.

But, the fundamental problem is that innovation is not safe in China, and that’s a problem not with socialism as such or democracy, but with no limits to the government.

From that derive many conclusions from a logical perspective. Chiefly, that China is uninvestable in any sector that is or can potentially be innovative.

Innovation is extremely hard work. It can take decades of research and investment. It can result from what appear to be very accidental discoveries. Pure innovation is often ‘threatening’ in one way or another at the very beginning. It is at that very beginning when it is also most fragile.

Why has Apple innovated nothing since they moved to China? Italy dominated on fashion. Where is any innovation in that industry since Versace sent flip flops to China’s sweatshops?

That’s a fundamental problem because it makes the whole world poorer, not richer, the lack of innovation.

Trade is beneficial, but mainly because it tends to result in more not less innovation. Otherwise it is just moving the same pie around, a zero sum game.

Xi Jinping says it isn’t zero sum, but their influence has grown while that of the west has proportionally lessened. You can say that’s because their influence was too low, but the lack of any innovation arising from China is a serious problem.

It’s a systemic problem, and not because of socialism but because of their authoritarianism, their complete intolerance of even bits of code running on some blockchain.

This is the most visible innovation that China has tried to stifle. Just how much more there is, can only be assumed by asking that 15 years on and 10 since Xi in power, what exactly has China given to the world?

Why is it America that invented electric cars, or indeed reusable space rockets, or Europe with solar panels and now hydrogen?

Authoritarianism is stifling. The effects of it we see are minuscule to its total effects, including in academia, industry and much else.

Investing in a China that is unwilling to protect innovation therefore, by limiting the government’s reach, is to invest in stagnation.

And that is arguably what the west has done for the past 15 years, but no more quite to the same extent because the world simply can not afford any slowdown in innovation.

They should instead re-open the crypto exchanges. They’re a litmus test of just how accommodative China is to new inventions, and therefore as long as they remain shut, China should also stay shut to investors.

Because we want to improve the world, not keep it stagnant in just shuffling pies around.

We also do not have to accept China’s authoritarianism. The Chinese do since Tiananmen Square, but the rest of the world and especially the business world, doesn’t.

Why should we accept any of it when we have the free choice to do business there or elsewhere, to do businesses under authoritarian boots, or in a jurisdiction with a rule of law?

Unless obviously they accommodate, two lanes of sorts. They can keep their “Chinese characteristics” for the Chinese citizens and businesses, while western businesses or investments get western “characteristics.”

And the same doesn’t apply vice versa, that Chinese businesses should get authoritarianism in Europe. Democracy – the framework of liberalism – is superior and therefore they should accommodate. And if not then maybe those “Chinese characteristics” should be applied vice versa too to only Chinese entities.

Because if what Xi is saying is that we should just continue as we have in the past 10 years, let innovation go to the grave, then hopefully this generation replies with a resounding no.

Why should we? History is a mirror, Xi said. We’ve read that history, which is why he should answer the question: Why should we just let innovation die?

We won’t, but no one seems to have any illusions about that. Nor is there any indication China plans to change anything. At least so far.

Hopefully however they’re aware of the very recent history of resets. Putin was given a real chance to do so. Now, his country is very poor.