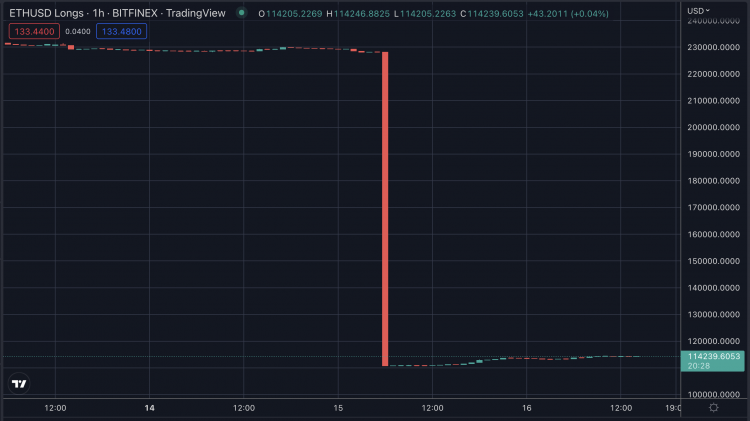 Ethereum longs on Bitfinex saw a sudden plunge on Tuesday, and it was all within just one minute.

Making this all a bit suspicious, with Bitfinex being one of the few remaining exchanges to not produce an audit.

The exchange remains largely unregulated, and although it got fined by CFTC in 2016 for offering unregulated margins, it did not quite acquire any license anywhere as far as we are aware.

The exchange nonetheless remains one of the very biggest by assets. It is thought to have at least 2 million eth, with 1.4 million confirmed under custody by the exchange itself.

So we’re left to make sense of some zigzags with Bitfinex not quite responding to any media enquiries:

Some 2 million eth longs being closed in one day on January the 7th 2021 sounds non credible because that’s all of the eth they have under custody.

Are these longs therefore completely fake? These are self-reported, so in theory they can report anything they want, but such fake data would be manipulation and CFTC does have authority to investigate derivatives based manipulation of ethereum.

The next notable arc is in November last year, at the peak of prices, when 450,000 eth longs were closed in one day.

That again is a huge amount compared to their total reserves, with it unlikely this is the market, and more likely it is a person, entity or Bitfinex itself.

This slow up and then insta down continues, including with the one minute close of 114,000 eth on Tuesday, worth $137 million.

Seeing this behavior, it is tempting to speculate – without concrete evidence – that the way bitcoin appears to always race eth may well be due to Bitfinex.

Bitcoiners have always managed to keep a lid on the ethereum ratio so far, and the Blockstream sort tend to use Bitfinex because the two are in a partnership.

The exchange therefore may be playing a role in keeping down eth as this longs behavior is clearly not natural or organic.

As a completely unregulated exchange, it may well be it facilitates rather than performs such manipulation, yet two million eth longs when their confirmed deposits are 1.4 million is impossible. Therefore this exchange is probably lying or is up to some sort of shenanigans.