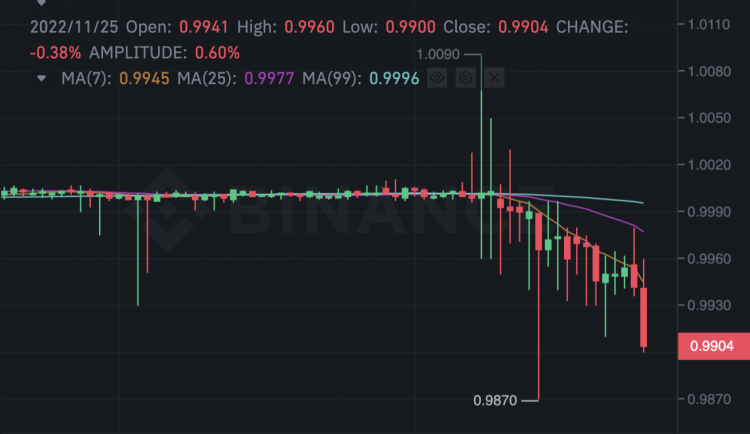 One wBTC is currently not one BTC for the first time since this tokenized dollar launched in 2018.

One wBTC is currently worth 0.99 bitcoin, a small difference that nonetheless systematically amounts to about $200, or 1% of bitcoin’s price.

That’s free money, at scale, though there’s a whole process to redeem wBTC to BTC with this tokenized dollar managed by a consortium led by Kyber.

It works pretty much like Tether. You give this defi consortium bitcoin through authorized merchants, they give you wBTC, and you can do the reverse.

The consortium then holds the bitcoin on BitGo. It’s all on-chain, so we have pretty much a perfect audit assuming they have signed the bitcoin addresses to prove ownership.

We can see they have a bit more bitcoin in custody than have issued wBTC. For the token part, we can neatly see it in one go. The bitcoin on the other hand are spread out on numerous addresses that have 1,200 bitcoin each with these addresses detailed on their site.

So they need more than 200 addresses, and we count about 250. We haven’t gone through each address to see whether the funds are actually there, but we’re sure that would have been pointed out if that wasn’t the case.

The only issue here therefore is the general potential risk of hacks or that something somehow goes wrong, which has always been the case since this launched and yet only now it has slightly come off the peg.

Where hacks are concerned, BitGo is the custodian and they provide insurance for up to $250,000. For sums above that, you have to pay a 1% annual fee.

In this case that would be about 2,300 bitcoin, or $37 million a year, which is a fairly big sum but the custodians can pass on the cost to the actual users of the wBTC by charging them 1% for the conversion to or from wBTC.

That would insure the bitcoin part, while the contract part has been running for years now. This big bounty that has been there has not been exploited, so what exactly has changed?

One change is a currently on-going upgrade of the multi-sig because “now that nearly 4 years have passed, several of the original signers have become inactive and/or lost control of their keys which diminishes the availability of the multisig,” says Victor Tran of Kyber.

This is the address that can be used to amend the contract, like “replace custodian, upgrade/modify token contract, etc.”

The transition has not yet happened, so a 1% discount until it does maybe is reasonable, but this slight depeg is probably more due to the sensationalized rumor mill:

A total of 72k #WBTC cannot be reclaimed by #Alameda investors, aka #FTX users, since they are both bankrupt!

Who exactly owns those 72k #BTC now? Are they even real?

We have not verified the above claims, but we don’t need to because who exactly mints or burns wBTC is irrelevant as long as one bitcoin is given for one wBTC and vice versa.

Alameda was a lot of things, but a bitcoin protocol hacker they were not, and therefore they did not create bitcoin out of nothing on-chain, nor wBTC.

We know that because we can see on-chain that the amount of bitcoin are the same as those of wBTC, and therefore yes those bitcoin are real.

Their ownership as such is therefore irrelevant with practically their owner being BitGo and technically ad abstractium their owner is the network itself which says the bitcoin are there. And if the fiduciary owner is Alameda, then either they sold them or they’re still the owner.

Alameda also minted and unminted a lot of Tether too. For that we assume they gave actual dollars as there are no suggestions whatever that Bitfinex was colluding with Alameda, they instead just being a user as far as it is known.

And while speculations regarding Tether and Bitfinex have been on-going for years because we can’t see the fiat part, the sort of speculation by this Duo Nino can not apply to wBTC because we can see everything.

The only legitimate speculation here instead is the ones that applied since day one in regards to hacks or these projects running away with the funds, but it’s a multisig of many prominent projects and therefore such sort of theft has a far higher bar than at FTX where just one man, Sam Bankman-Fried, had total control.

Not to mention actual custody is by BitGo with this in effect requiring significant collusion by many different parties that would probably, or at least hopefully, leak before any such collusion.

Which may explain why the depeg for now is fairly slight, and if it is just due to this sensationalism, then arguably it is good news as it would suggest the sharks have moved on from Grayscale, presumably because they found nothing there after Coinbase, their custodian, stated they have two million bitcoins.

So they’ve hopped, rather than circled, and looking at the onchain data for wBTC, more hoping is probable as there is no evidence there is anything amiss where this sensationalism is concerned.

The only thing being potential general nervousness in regards to this multisig transfer, but that’s just the general nature of crypto with this depeg easily arbitragable if that transfer goes fine as you can just buy wBTC and turn it into bitcoin.

But if one is sure there is actually nothing wrong, another arb can be to buy wBTC in the expectations others arb it and so bring its price up, with that probably being a sufficiently self fulfilling ‘prophecy’ to not need any actual arbing.

Making this more a speculative opportunity in regards to how far the peg might fall before even those that are sure there is nothing wrong get in, and by sure we mean within reasonable bounds obviously, no one can be certain of anything.