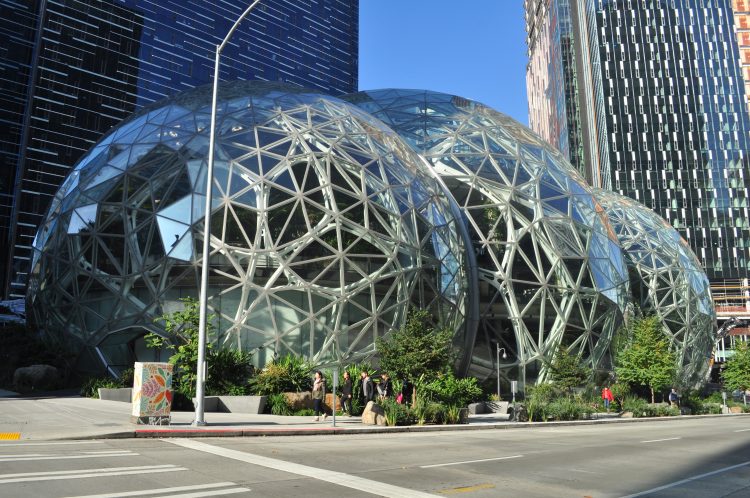 Amazon, the world’s biggest shop, is still behind when it comes to new tech and new means of payment.

Crypto, whatever its faults, is nonetheless a global tool of emancipation when it comes to commerce.

Those that may have been locked out due to lack of banking or for other reasons, can nonetheless still join the global digital economy by either mining crypto or buying it.

That’s why many businesses online accept it. BitPay for example counts more than 10,000 merchants. They have processed $5 billion in ten million transactions since 2011.

That’s big numbers, but not necessarily for a mamoth like Amazon. On the other hand, Amazon is so big that what might be a rare occurrence for a local shop, might be a sizable audience for Amazon.

There are people who want privacy for whatever reason. Why should they give the card details to Amazon, which might be hacked?

There are people that may have crypto, but don’t have fiat, or not enough for the payment. Rare, but again Amazon is massive.

The crypto market is reaching a reasonable size too. An estimated 20% of Americans now hold crypto. For Europeans, it is probably the same.

Offering crypto as an option, therefore, can be more just for the convenience of customers. Even if the vast majority don’t use it, turning what could be a bad experience at the edges into a nice new crypto payment experience, can be worth more than what the raw data might say.

This applies to all online businesses. Especially airlines that are global. There is no excuse whatever for an entity like WizzAir not accepting crypto for example.

But in the case of Amazon, it is not about the customers, or the experience, or even how many might use it. It’s just pure politics.

The Dum Leading the Monopoly Blind

“There has to be trust,” says Timothy Bray who as Vice President led efforts at the Amazon Web Service (AWS) from 2014 to 2020, the period when crypto was taking off.

He credits himself with basically sabotaging Amazon when it comes to even blockchain, let alone crypto.

And from that, he proves why his statement is wrong that there has to be trust in regards to the technology in question because why should we trust that he of all people has the right answer. Trust in authority so being a fallacy.

Naturally we should have some basic trust or default assumption that a new neighbor is an ordinary friendly person, and likewise for persons crossing the street, or that someone won’t take our towel if we go for a dive on the beach.

We should not however trust Bray with supreme knowledge of all things. Nor should we trust that he is not blindly biased. Perhaps too big of an ego for even Amazon’s good, which he left in 2020, and so on.

Nor should we necessarily trust matters when it comes to accounting, which is why we have audits.

Trust sure, up to a point. Trustless completely however, when it comes to a payments technology, is certainly better isn’t it.

But Bray does not seem to have much work experience regarding money itself, or payment systems, with his opinions and decisions therefore based more on ancillary aspects.

He is described as an environmentalist and a political activist. His base viewpoint therefore probably starts with ‘I don’t want this to work,’ and maybe even ‘I don’t care if it works.’

What matters more to him is this idea in his head that crypto is somehow these fringe libertarians, the very opposite spectrum to him which presumably is closer to communists.

“Obviously we also talked to a few leading lights from the crypto scene. That wasn’t very helpful, because they seemed mostly concerned with the aspects that got you out from under troublesome government regulation and contract law; it all had an unsubtle aroma of libertarianism,” he says.

This dismissal is throughout his statement and maybe is not too unfair in regards to people that purport to speak on behalf of bitcoin in circa 2014 when he probably met them.

That was an atmosphere when the public was very angry with the government. Endless wars were raging at full swing in the Middle East. There was a lot of darkness really, and there was an uprising in effect both from techies in regards to Wikileaks, Snowden, and then the public in Brexit and Trump.

Although plenty may argue banks have captured the government, they are two very different things with crypto primarily being basically an upgrade of the paper based money system, to a natively digital code monetary and financial system.

The dismissal of this aspect, of the technology, is objectively a mistake. One can say whatever they want about many things, but bitcoin does solve the double spending problem.

It is a technological innovation, objectively speaking, and of the raw form rather than an incremental improvement.

One does not therefore have the luxury of dismissing the technology, whether they’re Bray, Amazon, or whoever they are, because although our society is designed hierarchically, it is decentralized in as far as every human does have a choice in all things and at all times.

If the technology has use, then for those that it has use, they will use it. The blockchain can have uses in systems that require a very high level of security, like the army, or in systems where the veracity of data is paramount where that data is digitally collected say through sensors.

Crypto has use for global payments, mainly as an alternative or backup. That can include circumventing the government, like capital controls. It can include the government using it to pay informers. It can also include some ordinary person using it because the card doesn’t work for whatever reason.

The statement therefore that someone can be ignored because “this person is pretending that the proportion of crypto biz that is actually Ponzi doesn’t round to 100%,” is demonstrably false because crypto does have a use for global payments.

Someone like Bray however will probably never change his mind. He has been infected with blind politics where emotions as well as rigidity are often superior to rationalism there.

An entity like Amazon however can not afford to have such opinions especially when it goes against 20% of the public, and the better crowd of the public at that.

Amazon afterall is just a database that can very easily be replaced, and if they are imposing politics on their ordinary business for unsound reasons, replacement is inevitable.

Because we can not have a situation where we basically have ‘hater’ businesses. It is not for Amazon to dictate what payment method users prefer. It is of course their choice whether to provide it, but it is also the choice of users to start hating Amazon.

This imposition of politics and this sabotaging on apolitical matters where we are dealing with a payment technology, has to end if Amazon is to maintain relevance for long.

Because we assumed maybe they didn’t like crypto. However having it confirmed in such clear language is something else entirely.

And if you are going to go against an entire technology and against 20% of the public, well you better be right.