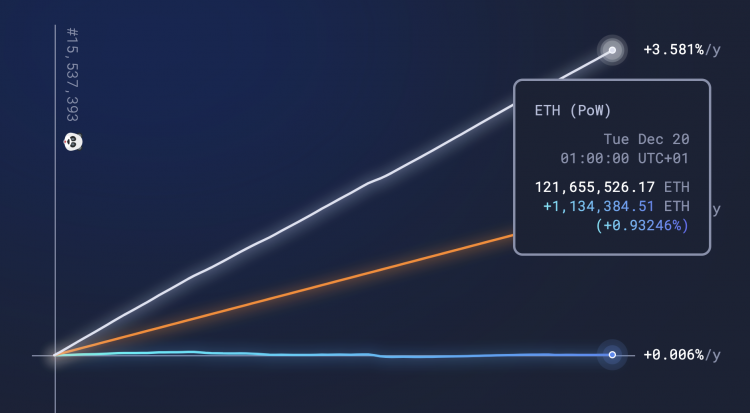 The ethereum supply without and with the Merge, Dec 2022

The ethereum supply has become static, with it largely unchanged in the past three months since the merge went live in September.

There are now 120 million coins in circulation, which is almost precisely as much as there were in circulation on the day of the Merge.

No new coins have been added, save for about 1,000 eth worth about $1 million, and that’s for an entire quarter.

In a different reality where the Merge didn’t happen, they would have added by now 1.1 million eth, worth $1.3 billion.

The ethereum supply would have kept increasing pretty much endlessly at an inflationary rate of 4% a year.

The ethereum price would have probably been at about $500 at this point, maybe $750 at most, as the market would have struggled to absorb all that new supply.

But in this reality, there is no new supply. Ethereum no longer has inflation at all. The currency, even during this bear, is of a fixed supply or at least has been for this quarter.

As you all know by now, that can change depending on network usage, but network fees currently are at 40 cent and at times have dropped to even ten cent this quarter.

That is still enough to keep the supply fixed, in great part because 2.7 million eth has been burned in over a year since August 2021 when the new network fees mechanism kicked in.

The Merge sort of adds a double burning in as far as supply that would have gone out to miners, no longer does.

A better word is probably needed for it, but at 1 million eth per quarter being saved due to staking, that amounts to 4 million eth a year.

Add this 3 million from the actual burning, and about 7 million eth sort of vanishes compared to what it would have been prior to August 2021.

That’s about 7% of the total supply burned or ‘saved’ every year, with this entire mechanism still very new in as far as this is the first quarter ever that ethereum’s supply has  been pretty much fully static.

Bitcoin ‘feels’ as if it is deep in the ravages of an actually burning ‘village.’ The bear is very very real there.

If you were around, last bear eth fell and fell while bitcoin stayed all cool and stable with cryptonians flocking to it as bitcoin’s store of value meme gained more credence.

This time and so far, it does appear that eth is storing that value a lot better. Unlike bitcoin, eth has not gone below the June low. In fact, the eth chart does not look that bad and might even look promising from a medium to long term perspective.

This stability in eth is very new. The currency used to be very jumpy on the downside during bear, but there is no new supply anymore so it appears to be showing some considerable strength.

One can argue that it should be even more bullish, but we have gone through a great clearing of sorts, so sentiment is just not there.

And yet, this kid is making a cool face while looking at that actual burning of a lot of the crypto village, and going ‘I don’t care.’

Why should he? His defi is fine. He is no longer carrying bloated weight. He is fit and lean now like a global sweet machine that just vrums.

So we wait. The test passed, strength shown, we just wait to see what this kid will do when its time comes to take the show.

Because on the downside, he has checked bitcoin a few times, saying here and no more. On the upside, how much will bitcoin be able to check him?

Now this is all speculation of course and saying all this during the peak of bear is of course bull exuberance and so price will price.

But something has changed, fundamentally, and now we have enough data to show it. That may suggest that so far too much focus has been on bitcoin. Soon, and certainly at some point, that focus will come to eth.

There’s still some things to go through, so the bear won’t leave in a hurry. There’s the unlock of staking which may add some new dynamics, though it probably won’t change much. There’s the MT Gox coins that may come to market in Q1. Those OGs will get a lot of fiat, as well as coins.

The OGs will probably crypto a lot of that fiat, but there’s a potential for bear narrative in both, which suits fine OGs as they’ll get more coins.

So, while the bear is still here, we do think he is done and more importantly, we can see a bull in the very far far distance.

Time will tell of course, but it’s Christmas day soon. Maybe there would still be about two months after when you can still play with fire in either not buying – with savings that you don’t ‘need’ – or in selling, but we’re entering dangerous territory for bears as at any point now we may move towards a bull that we won’t know it is a bull until everyone is drunk.

Because the crypto show continues, although with a pause of course for our Christmas and New Year, as for the first time we find ourselves with a major coin that has a fixed supply so far.

Some thought that would be in a century. Well, it is now, and few have had time to notice it among all that bear techno raving we’ve had this quarter.