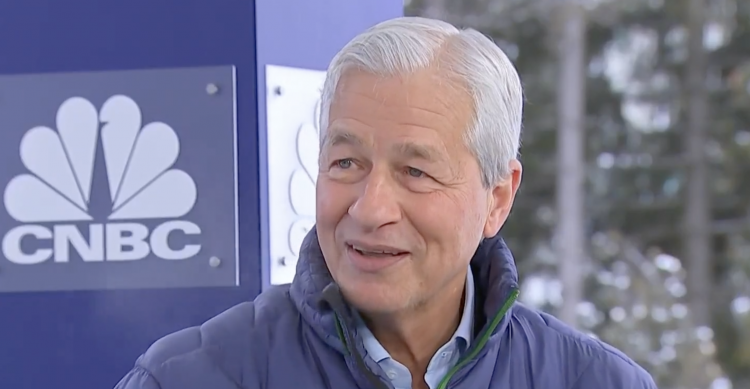 JP Morgan, one of the biggest bank in the world has put down crypto as a possible challenger to the USD in its 2023 outlook report.

The 2023 Long-Term Capital Market Assumptions report with a 10- to 15-year horizon draws on quantitative and qualitative inputs as well as insights from experts across J.P. Morgan Asset Management.

Among one of the risks that might alter trend growth or inflation, they put down the “rapid abandonment of USD as key reserve currency.”

“A challenger to USD (from either crypto or from an alternative fiat currency) emerges and pulls reserve assets away from USD; diminishes demand for U.S. assets and refocuses attention on U.S. deficit,” it says.

Such event would be “negative for growth, USD, bonds, credit and stocks; positive for real assets and commodities.”

This is the only mention of crypto or bitcoin in the 124 pages report focused on assets, with crypto not even mentioned in regards to alternative assets.

The report does however have some good news for crypto as JP Morgan claims “lower valuations and higher yields mean that markets today offer the best potential longterm returns since 2010.”

They naturally say assets might go lower still, and so there might be even better opportunities, suggesting some investors might wait until it becomes clear that inflation is no longer a problem.

The significant fall in stocks, bonds, cryptos and some fiat currencies in 2022 however means “that asset markets today offer the best long-term returns in more than a decade.”

In addition, “today, the U.S. dollar is more overvalued in nominal terms than at any time since the 1980s, and in real terms since 2002,” the report says, adding:

“Any investor making a strategic allocation decision across global asset markets today must carefully scrutinize the FX translation, as it will be a meaningful component of forecast returns.

An impending period of subtrend growth may continue to support the greenback, but over our full forecast horizon we expect dollar valuations to recede – particularly as large but slow-moving blocs of international capital (including insurers and pension funds) can now find the yield in their domestic markets to match their liabilities. Over time, this could start to reduce capital flows toward U.S. assets, in turn removing some support for the dollar.”

While previously JP Morgan stated bitcoin’s correlation with other assets is inconsistent, there’s some academic speculation that it inversely correlates with the dollar, albeit weakly.

If markets expect the dollar to fall therefore, as it has been doing since October, then bitcoin may rise.

In addition, although the suggestion that crypto might challenge the dollar’s reserve status might seem far fetched, it is not necessarily out of bound in a 10-15 years period.

That’s to a limited extent as it is unlikely anyone will pay for oil in crypto soon, not even Russia’s president Vladimir Putin.

China in addition is very hostile to cryptos, so a China-Russia block using crypto to challenge the dollar seems unlikely, and any stablecoin crypto tracked to RMB would lack credibility not least because the yuan is softly pegged to the dollar and does not freely trade in as far as the Chinese central bank sets its value bounds.

However, the piling of dollars for reserves as many countries do could be diversified to crypto.

The Swiss central bank for example had to buy US stocks to keep the franc from significantly increasing in value against the dollar.

They could buy bitcoin as well, like they buy gold, and in some countries to some extent crypto is already challenging the dollar.

Lebanon and Sri Lanka are the latest to join the list of countries that have seen a monetary collapse in recent years. Crypto adoption has grown significantly in both.

Most however even in these countries still go to the dollar, but usually policies are enacted in these sort of situations so that their national currency doesn’t devalue further.

Bitcoin often is under the radar, allowing it to act as a proxy of sorts. In addition, since bitcoins don’t have to go through banks or other central intermediaries that can be controlled, enforcing such policies is far more difficult.

The crypto does therefore in some of these countries and to a limited extent act as a reserve asset in as far as people keep their savings in bitcoin.

That might grow over the next decade, potentially even to the point it challenges the dollar, but arguably only in savings as for payments cryptos are volatile, although that too might change.

Jamie Dimon, the CEO of JP Morgan however has a different view, calling crypto a “hyped up fraud,” which is what you’d expect from his generation of bankers.

On the other hand he said JP Morgan is using the blockchain for intra-day repos and they have a JP Morgan Cryptocurrency Exposure Basket that trades as a note, investing in crypto companies.

Making it a ‘fraud’ they’re participating in, in addition to the $36 billion they’ve paid in fines for participating in actual fraud and other breaches mostly over the past decade, with all banks paying $340 billion in total for illegal actions.

In addition, JP Morgan previously argued that bitcoin could potentially reach even half a million if it overtakes gold, and $2 million a coin when compared to the cash money market.

As new gold, the dollar would find significant competition because bitcoin is easy to move globally, but the dollar dominates in international payments and bitcoin is unlikely to make a dent there in part because it can’t process many transactions.

Yet it moves about $8 billion a day, while eth moves about $2 billion. This can potentially 10x, with the question being more what does challenging the usd reserve status mean exactly.

To some extent, it challenges it even now and its use market might grow, but replacing the dollar’s dominance in international commerce is unlikely.

The data for bitcoin’s usage in global commerce are almost non existent as it is hard to estimate, but we’d say about half a billion a day to one billion.

Even at $1 trillion therefore bitcoin would still amount to circa 5% of the dollar, at which point it would overtake the pound and even the yen, but wouldn’t necessarily affect the dollar.

The bitcoin market cap has neared $1 trillion already. It might hit $3 trillion this cycle and maybe $5 or even $7 trillion next cycle, making it difficult to see it actually overtaking the dollar in the next decade.

If its value becomes more stable however and the scalability challenges are addressed, it may well become a global reserve currency as it is not tied to any nation state, and where the store of value component is concerned, it is already one to some extent.