Does Bitcoin Care About the Debt Ceiling? 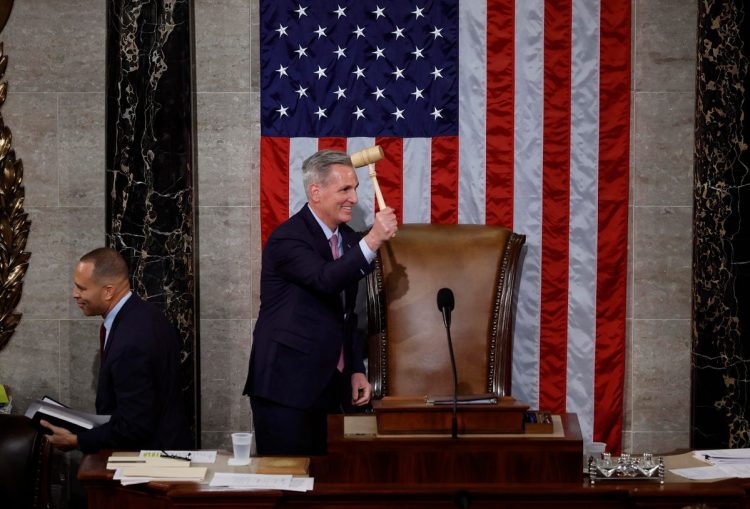 Kevin McCarthy Speaker of the United States House of Representatives

The US government spends far more than it takes in and much of that spending is on interest for their $31.381 trillion debt.

As Jerome Powell, the Fed chair, made it clear at the time, the money that was printed through buying bonds was not a grant, but a loan.

Those loans have to be paid back, and with interest. Just in time, Fed has raised interest rates to 4.5% and is expected to increase them further to near 5%.

These higher rates apply to only new debt, about $1.4 trillion since January 2022, bringing the total amount paid on just interest to half a trillion a year.

Does it matter? Well, if debt is increasing at a faster rate than growth, the government is kind of bankrupt.

Unlike a company or an individual however, they don’t go to court to file for bankruptcy. Instead the situation translates to persistent high inflation, or taxes that are too high for the economy to bear, or a lack of public investments in infrastructure or education.

Arguably the United States is not quite bankrupt, although some argue it, but half a trillion on just interest is as much as Europe and China combined spend on their military.

It is an unsustainable situation, and so sound money is kind of back in Congress for the first time since Barack Obama was president.

Republicans have rediscovered the fact that they don’t like prolific spending, which they forgot during Trump’s presidency, and therefore they are unwilling to authorize an increase in the debt limit.

That limit has now been reached with Janet Yellen, the Treasury Secretary, stating that she has issued a debt issuance suspension period.

The government will be able to fund its operations until June, after which it might have to default unless significant cuts are made that bring spending in line with intake, estimated to require a 5% reduction in spending.

Some estimate that might lead to a contraction in the GDP of 5%, but almost all expect the debt limit to be raise with markets seemingly ignoring the matter.

Republicans however are unwilling to raise it unless spending cuts are agreed. The US president Joe Biden has refused to negotiate with them. There’s a political standoff therefore that may rumble on perhaps until June.

Debt is at the foundation of fiat money. Without it, the dollar doesn’t exist at all. Moreover, the amount of debt has to increase overall because fiat is created at interest. You therefore have to loan more fiat if that interest is to be paid back.

Where it concerns small amounts, including a mortgage, that interest can come from others. But where it concerns $31 trillion, that’s more than the $21 trillion for the M3 money supply, which is close to all money.

Reducing the capital on that debt therefore has not quite worked previously. The United Kingdom for example engaged in a decade of austerity in 2010s, and the end result was they ended up with more debt.

For US in particular the question is also just what do you cut? The army presumably is off question, as is Social Security spending, leaving only actual public spending on the table, things like education or infrastructure.

The problem is all that public spending is less than half a trillion. Even cutting it by 10% won’t make a dent. At the suggested 5%, it would hardly amount to more than $15 billion a year.

At least it is not increasing you might say, but no one really wants to cut education or infrastructure. To the contrary, the latter needs more investment to harness the latest technologies, including electric cars and renewables.

Taxes can’t rise much further either. You could try to close loopholes, but rich companies and individuals will always have better lawyers than IRS.

The real solution is of course for growth to be faster than the debt, at which point the debt wouldn’t matter as eventually it would be paid off.

Getting such growth however requires hard reforms that are a lot more complicated than cut school meals or don’t invest in tomorrow.

Actually enforcing anti-trust law for example can be one such reform. Google’s commercially biased monopoly on search where their interest is to promote their ad business, is probably a significant drag on productivity because it has become hard to casually find actual information.

Amazon’s semi-monopoly on e-commerce translates to it being a private regulator of the market, instead of competitive capitalism.

There are other examples all know of, including Apple’s high charges on their app store, charges they can impose due to the duopoly on the mobile market.

Another potential reform is the liberalization on investments. Currently, startup investment is limited to VCs who may all largely think alike as they come from the same background, and therefore potentially innovative companies might not make it to the market.

Those VCs however have a lot of money to spend on lobbying to protect their monopoly on non-publicly traded investments, as do the likes of Google or Amazon.

Making them topics that Congress might not want to touch. Instead we get a distraction because the focus on simply cutting spending, unless it is military spending, might not quite be the answer as it might lower growth, and therefore tax intake, cancelling each other out.

We have not quite heard of the plan by Republicans to get such growth however and without it, focusing on the debt limit is just tinkering at the edges as without growth there is no way to make a dent in debt.

A US default on its debt is in theory a potential outcome of this standoff, though in practice no one thinks it likely.

In addition such default would be a technicality, rather than an actual default due to unaffordability, with markets probably capable of making such distinction.

The last time the prospect of a default had some semblance of being real however, the S&P500 fell by 20% and in just one week in August 2011 when the S&P downgraded the US credit rating.

Usually, an actual government default is followed by significant money printing which is reflected through high inflation, like in Argentina.

A technical default might be a different matter, although the government in theory could just print a $30 trillion coin and say the debt is paid off.

That however would add trillions in new money, which may lead to investors flocking to bitcoin to escape any devaluation, as they did when the $10 trillion was printed in 2020-21.

On the other hand the reason stocks fell is that in such an inflationary environment, investors would have less discretionary spending to invest, and that may well apply to bitcoin too.

No Congressman can expect to be re-elected however if they bring about such an event, so bitcoin is kind of ignoring all this as 2011 wants its debt ceiling talk back.

The development is still relevant because just how it is resolved can have consequences for investments, including bitcoin, in as far as it can potentially affect growth.

Yet to markets it may appear more as just politics rather than an actual plan, and markets usually don’t care about theatrical politics especially considering that Republicans come across as a bit hypocritical in caring about the debt ceiling only when they’re not in charge.

Nonetheless they have a point, but unless they come up with real solutions that have a chance to work – and just reducing spending hasn’t either in UK or during Bill Clinton’s time of a balanced budget – then it’s not clear whether the market will care to even speculate about the debt ceiling.