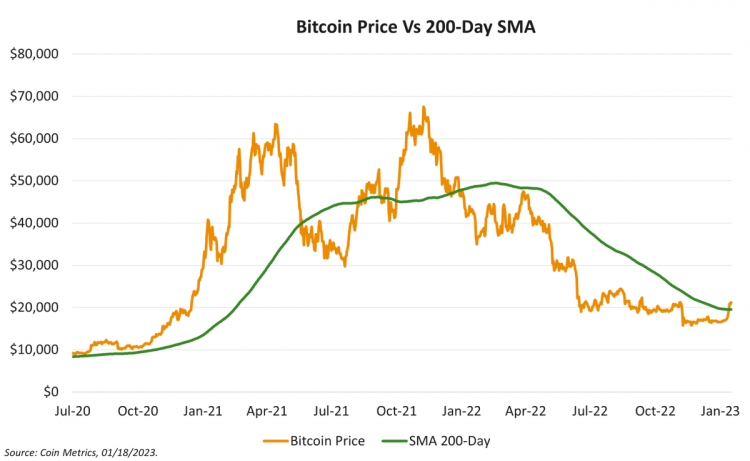 Bitcoin has crossed $23,000 and for the first time in a year, it has also risen above the 200-day moving average.

That’s a widely watched long term indicator as crossing the moving average can signal a shift in trend direction.

“Bitcoin has broken through its 200-day moving average for the first time in over a year due to the sharp rally seen over the past 2 weeks,” says Jack Neureuter of Fidelity Digital Assets Research.

The last time bitcoin crossed the 200 day moving average was on the downside in January 2022, almost precisely a year ago.

A year long bear market followed that saw its price dive from $70,000 to $15,000 on the day the FTX bankruptcy was announced in November.

It has recovered since, although to levels that to the wider public might seem like it is still stuck in the crash.

However, sentiment appears to have significantly changed with the focus returning to the potential upside.

Even CNBC is in on the game, pointing out that investors cash holdings are near record highs at $4.8 trillion held in money market funds.

That’s all dollars on the sideline that may be waiting to actually invest after an atrocious year for cryptos, stocks, bonds and many fiat currencies.

Investors overall however are probably still cautious. S&P500 is trying to cross the resistance line at 4000. Nasdaq though surprised on Friday with a 2.5% jump on seemingly no news.

Or obvious news. There’s talks of China being back to business and out with their , ideologuing.

China claims to be back to focusing on opening up and market reforms, on respecting property rights and even IP rights.

Smooth talking the west, or did the recent protest – when democracy was shouted in public for the first time since 1989 – scare them off?

Who is to know and who is to know whether any of it is meant and will actually be followed through, but there’s speculative potential to wonder whether they might open our crypto exchanges, starting in Hong Kong.

Such China reset in addition, if it is followed through, would be a fairly big development that will have an affect on assets.

Moreover, reading many investment letters, it’s a long line of gloom that points out the supply chain issues, the Russia war, the high inflation, the interest rates, recession, oh yeah climate change and of course the list can go on and on.

That gives the sense they’re very depressed in a portrayal of 2022 as some sort of a terrible year, and right or wrong, our point is more that people are probably sick of hearing it, especially investors.

The outlook from that low point instead, except where Ukraine is concerned, is largely up or so seem to think the JP Morgan analysts.

For Ukraine, they’re bracing for a surge. Russia has been training forced conscripts for months, and they’ll be sending them now in a few weeks.

The West has been preparing for it, sending tanks and Leopards. Things may get difficult for the Ukrainian army, but we have to hope this is the 2006 surge.

After Mission Accomplished, armed rebellion reached the point where Iraq was torn apart in 2004. The response of the then US administration was a surge, 100,000 new troops in 2006 which seemed like a big number.

Trained troops, not conscripts, but that didn’t go well at all and made the situation worse. So much so that the public began turning against the war at that point with Tony Blair resigning just a year after, while George Bush left to Obama’s very new tune.

There isn’t much reason to think this Russian surge will go any different. They’re doubling down on a mistake, and so they’re doubling the mistake, not least because the Western public will be alarmed if they make any gains, forcing a response by the democratically elected politicians.

And this matters, but more on a principle basis and a structural basis as this is the first time a democracy is attacked by a great power since Hitler.

Where markets are concerned however, the matter is now largely quarantined with sanctions on both sides now more a 2022 story.

Naturally there can be new potential shocks, but arguably not any foreseeable either in macro or in crypto.

Instead there’s plenty foreseeable in regards to the upside, but there’s still some clearing up to do of leftovers.

Silvergate said they had $2.5 million in Genesis. That’s a very small amount, and they claim “Silvergate’s exposure to Genesis is minimal and customers’ deposits are, and have always been, safely held.”

The Osprey Bitcoin Trust (OBTC), which you probably have never heard of, but is like GBTC, has opted for redemption.

They have $62 million worth of bitcoin in the trust and “are considering a redemption program for investors.”

As it is a small amount and as these sort of vehicles are for long gone times now that we have ETFs in Europe and Canada, the market naturally hasn’t cared.

On the mining side, the Provident Bancorp bank “repossessed cryptocurrency mining rigs in exchange for the forgiveness of a $27.4 million loan relationship” back in September.

That goes to show miners have been in trouble and the bear squeezed out every little bit they could, leaving only miners that are not desperate to continue operations.

All of which, bad as it may be for those involved, nonetheless might show bears got a bit too fat to the point they now have nothing to eat.

However, the crypto sentiment is probably still atrocious where the wider public is concerned. You can’t even mention bitcoin now, which maybe is good because that might be precisely when you should mention it for the troll feels.

So we’re in ‘dangerous’ bull territory as it feels crazy exciting to hit $23,000, and sums that were previously atrocious might now seem too high to the day traders, and someone somewhere should play a violin for the bears that will now lose all their 2022 gains by still expecting it will do 2022.

Making this potentially a sober bull, having bacon and egg for breakfast with some light Mozart, with Saturday night clubbing still very far away, let alone getting drunk like the bears.

Translated, we might hit resistances and get bear dives, but it is probable we will not see again some price points, and that’s what can make trading dangerous for those that don’t have it as a day job.

Because this is sober times and that means if you’re gone buy, you hold. The crossing of the moving average in addition is usually an indicator to buy, which might explain what has felt like a wow rise in the past few days.

However, since no one knows for sure that it will, the drunk bear and the sober jumpy bull fight may be the spectacle of the year which we might well enjoy.