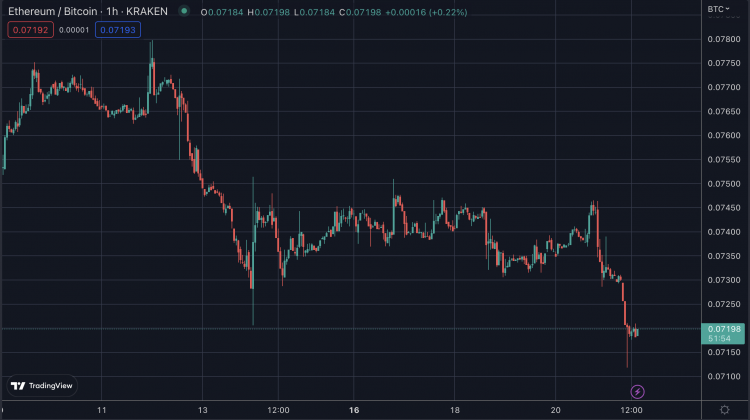 The ping pong is back with bitcoin taking the show from ethereum, sending the ratio down by 0.005 BTC, or $114.

That ends speculation that ethereum will now forever be leading the show to the flipping, although a paper – by students however – curiously claims “Ethereum now has a stronger influence on other cryptocurrencies compared to Bitcoin.”

Ethereum is now deflationary, with its total supply reduced by 3,000 eth recently. Prior to the merge, it would have added 1.5 million eth.

That’s a huge difference as $2.5 billion of new demand would have been required, and in just four months.

Naturally therefore a repricing between bitcoin and eth was on the cards, but the ratio has kept pretty stable at around these levels for closing in on two years now, since May 2021.

That it hasn’t fallen in the bear is a sign for many that the Merge is having an effect, but just last week we were wondering whether the ping pong is still on, or whether the supply change has added new dynamics.

We now know that the play is still on of one leading while the other is all grumpy, and then the other leads to return the grumpiness.

For some, this is an indication that the halving cycles are more narration, but we disagree. Instead, it is more a sign that bitcoin does still have advantages over eth which maintain what for now is clearly higher demand since it has a higher market cap, even though the ratio has been steady.

In particular, and perhaps the only advantage that bitcoin still has over eth, is that it tends to break new ground in traditional financial infrastructure.

Blackrock for example or Morgan Stanley are only dealing with bitcoin. That’s for addition in passive or diversified funds and it’s only a small picture of access that only bitcoin has.

Ethereum however tends to follow. Once they try bitcoin and get comfortable and there is demand, they add eth.

In some ways that means, or it has been the case so far, that eth is kind of a bitcoin time machine price wise, generally four years behind.

Its supply change doesn’t necessarily change that sort of dynamic as there’s also the demand equation. What it may do and maybe has done is bring bullishness since eth was first to start this bull run among the two.

After that however, one can’t expect bitcoin to slug forever. The coin is obviously going to keep up with bitcoiners also having plenty of money to short the ratio if they want.

A more objective speculation instead might be not in regards to the flippening, but whether the supply change might add a new level of bullishness to the two top coins and crypto more widely in this second bear-bull year compared to previous second years.

Because although there is more ground to talk about a flippening, Jamie Dimon is not on CNBC talking about eth being a hyped up asset where it concerns the masses, and an investment offer for JP Morgan’s wealthy clients, and even that by itself makes bitcoin both different as well as having staying power.

A flippening or non-flippening however is more just sort of team sport. What matters a lot more is that ethereum has not made a new low since June, and bitcoin following through this week to the point it crossed the 200 day moving average may well bring more attention to all of crypto.

In addition, ping pong is fun anyway and if it keeps up, it may well be very good news for eth since bitcoin has a far bigger audience.

The ratio also obviously won’t move straight up if it heads in that direction. It has bitcoin bears too whom eth bulls have to fight, and that’s not an easy fight at all not least because they have tether, although eth bulls have DAI.

So the merging might not change the game itself, but within it, it might change the levels. However, whether it actually will remains to be seen.