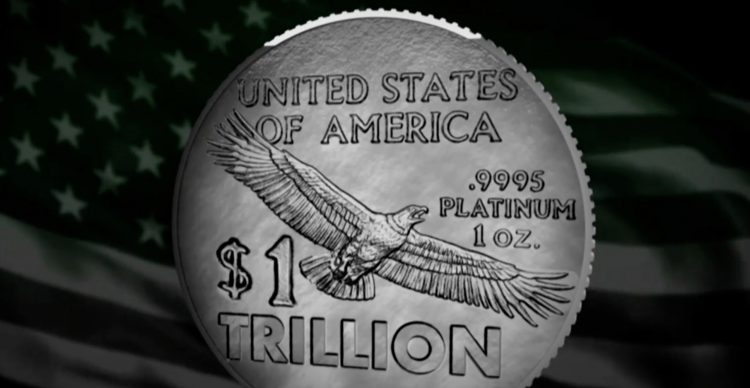 The Modern Monetary Theorists are for it. They want to add minting to the government’s power to tax and borrow.

The current Secretary of the Treasury and former Fed chair, Janet Yellen, is against it however. In fact she was vice chair at the Fed in that 2013 when Fed said they won’t accept this platinum coin.

The law allows the treasury to mint a platinum coin in any denomination. So Fed arguably can’t not accept it as they would be breaching the law.

The law however was aimed more for commemorative coins, so it could be challenged at the Supreme Court. But if Joe Biden really wanted to go ahead with such coin, he could just threaten the judges with stuffing the court, increasing the number to 9 from 5 with the new ones appointed by Biden.

It is in fact what the previous president did in the 1930s to get the Federal Reserve Banks be established after the court struck down those plans as being unconstitutional because the constitution says only gold and silver coins are legal tender.

Realistically therefore if the president was so willing there are no real obstacles, but practically there are three main considerations.

The minting of money nowadays is done by the hybrid and the generally privately incorporated central bank which has commercial banks as shareholders, except in Switzerland where it is publicly traded.

Fiat money thus, and this is in pretty much every country, is not public or state money but primarily market money in as far as banks are private market operators.

It is a highly regulated activity, so the state has a say in that way, and the president appoints the chair of the board, and most of the Fed profits go to the treasury, but not all.

The state also puts itself on line as the guarantor by legally requiring that this private money, and except in El Salvador only one such private money, is accepted for payments of debts, including taxes which are a form of debt.

This discussion about a trillion dollar coin therefore is more a proxy debate on the real debate. Should the state be able to print its own money?

A similar question for full reserve banking was put to the Swiss in a referendum and they ended up saying no. The referendum organizers complained it was handled in a biased way, but there was an interesting debate and in the end we ended up being against it.

Where a trillion dollar coin is concerned it is a bit different because one can ask why did the government borrow about $10 trillion during the pandemic emergency, instead of printing it.

We got the high inflation anyway, the cost of such printing, and yet we didn’t get the benefit of minting, Fed did instead and they want it all back from the inflating public, at interest.

In such emergency there probably is a far stronger argument than in the current debate about minting, with the only criticism against it being that the government might be tempted to mint in non-emergencies too.

Well, they’re tempted to borrow and borrowing is minting basically when it comes to the government, but without the benefit of seigniorage.

That might change now as Fed is selling bonds. This in effect allows Fed to burn money. If it is minted, you can’t quite burn it anymore, but the Fed borrowing allows for a reduction in the money supply just as easily as an increase.

Except the interest. That becomes permanent money, minted, usually amounting to a fraction of the capital in any given period, but as much as the capital in about 20 years.

The current base money supply therefore, the minted money, will increase by about 10x in a decade or two. That means the value of the dollar will fall by 10x, and therefore we’ll all need to add a zero with a gallon of milk costing 10.

Fed can neither reduce nor delay this process. As such, this specific benefit of having tools to control inflation is only short term. If that $10 trillion had been minted, there might have been no stopping of the current high inflation. But, in a longer time frame there is no stopping of it either, it’s just that it occurs more gradually and spread out, rather than instantly and in a runaway manner.

Some also state that another benefit of this privatization of fiat is Fed’s independence, but at best such ‘benefit’ would be mixed and at worst it can be catastrophic as in the case of New York in the 70s, and realistically it is largely non-existent as a benefit because the government arguably can borrow as much as it wants and if Fed disagrees, the chair can be fired or Congress can just fire the whole Fed as well.

That tradeoff in regards to inflation however is not a small matter, and since a trillion dollars has never been minted in recent history, do we know what effects it might have on prices?

Krugman of course thinks none. Fed printed $2 trillion anyway, was the argument in 2013. Except they can unprint it as well, and you can’t unmint.

So this control over inflation, and the potential lack of it through minting, is the second consideration beyond who controls money.

The Modern Monetary Theory (MMT) however would argue that you can unmint by increasing taxes which takes money out of public circulation, though you’d have to hope the government doesn’t increase spending as it feels a bit rich from those higher taxes.

In addition, the increase in taxes can be painful. The 2022 assets crash was in part because of the addition of a 5% capital gains tax for the richest, whom all sold just before that tax came in.

It’s an equitable tax however, so what can you do, but having that as a foundational policy where taxes are increased or decreased to control inflation sounds volatile.

The strongest argument against this one trillion coin is that it silences Congress.

Rightly or wrongly, those representatives have been sent there for a reason and they are doing their job currently. You might disagree with their views but they do have a very sensible point in stating that the debt is too high and is increasing almost uncontrollably.

The more that debt increases, the more the dollar will be devalued permanently. In addition, it may be time to ask some hard questions.

The United States was running a surplus when George Bush became president in 2000. The very costly wars created a deficit, but now we’re at peace where our own troops are concerned and any aid to Ukraine is small numbers compared to what was being spent in those wars.

So why are we not back at surplus? Well, we might move towards it. There was a half a trillion tax boost for 2021. That was a miracle year economically, so it might not repeat, but if the economy continues to grow as it has, then the deficit might narrow significantly.

The spending on the military however maybe needs to be looked at. Of course there’s challenges on all fronts from a military perspective, but does US need to spend 4 or 5 times more than China?

That budget was ratcheted up because of those wars and now that they’re not on anymore, if not ratcheted down then maybe at least lowered a bit… and a bit here can be $200 billion or half of the sum needed to pay the interest.

Bold of us therefore to take sides in politics, but it remains to be seen for just how long the no negotiations position of Biden can be held.

To some extent he has a point. He is the president and Democrats are in charge of policy, but Congress does have the right to not validate anymore debt, and so in this system of a complete separation of powers between the executive and the legislative, he is not quite fully in charge of policy.

It also remains to be seen for how long the Republicans will hold out. One thing they can’t do is both argue this and support Trump for candidate nomination because Trump upped and upped the debt too.

The public will in no way be amused if it perceives, as to some extent it does, that this is just politicking. They might however be open to the very fact of having the debate because it is both a serious and a complex matter.

In 2013, Republicans took it to the very last day, averting a default at the last minute. In this 2023, a default has become too scary a proposition, but it’s a technical default, not a real one so would markets really care?

A better question is also be who would be blamed? Both sides is the easy answer, which side more? Well, one can argue that Republicans should win and then make policy, just as one can say they did win in the House, so they are making the little policy they can.

It’s time to talk really, although this is the height of domestic politics with both sides having their arguments that play well to their base, so it might go to the last minute again.

Where crypto is concerned, even without a trillion coin, it should play well to the crypto base too because it’s non-state and non-banking money.

With a trillion coin, it would play to the moon base but it is a bit difficult to see Yellen mint it. She is however warning about the consequences of a default and that may lead to some diversifying, with bitcoin mooning during that 2013.

There were other events which contributed to that moon, including forced haircuts by banks in Cyprus and China discovering bitcoin, but in theory a loss of confidence in the dollar does not leave many other alternatives than the euro and cryptos.

It is difficult to see it go to a default however and Republicans would obviously not have a mandate for it. They can win the presidency instead and then implement their spending cuts with the situation currently not so dire that their constituencies want to see just how seriously the markets take it.

But arguably the situation is sufficiently dire to take the step they have and so they can’t quite be blamed for wanting to discuss the matter.

Solutions are necessary because the debt can not keep increasing faster than growth as it has been. Either there is some plan to get growth, and maybe we are getting good growth with full employment though it remains to be seen for how long, or the state becomes smaller.

Or tax increases but those would affect growth which may lead to cancelling out where tax intake is concerned.

Or of course just print that trillion dollar coin. Bitcoin does need a doubling in market cap afterall so we wouldn’t complain on a self interest basis, but it may be on the way to doubling anyway without this additional help and so, on a more objective basis, such minting would probably not address the issue of the deficit which does need to be brought down.

Whether a minting or a printing therefore, the end result is the same in money being worth less, and bitcoin more presumably.